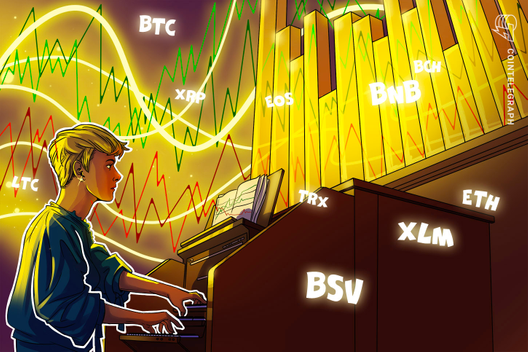 Which altcoins are vulnerable to a deeper correction? Let’s look at the charts

Regulators and politicians around the world, barring a few, continue to hound Facebook’s Libra coin. European Central Bank board member Benoit Coeure said that Libra will not be allowed to launch until it guarantees safety for its users. Damian Collins, a senior official at the British Parliament was even more aggressive of the project as he said that it “is going to be open to massive fraud.” The recent opposition to the project indicates that it has to clear several hurdles before it can become a reality.

Libra has taken the focus away from the involvement of institutional players in the asset class. We believe that with Bakkt user acceptance for Bitcoin futures starting today, gradually the focus will shift back to institutional investors. The community will also keep a close watch on the outcome of the lunch of various crypto leaders with legendary investor Warren Buffet.

We like the way the major cryptocurrencies have not plummeted even under consistent negative news flow for the past few weeks. This shows that strong hands have purchased in the recent up move from the lows and are not panicking. A few major cryptocurrencies are looking strong and can form buy setups within the next few days. Let’s see the critical levels to watch for on the upside, which will signal the resumption of the uptrend.

Bitcoin (BTC) is in no man’s land. It has been stuck between the 20-day EMA and the 50-day SMA for the past four days. This shows that both bears and bulls are not willing to take large positions and are in a wait-and-watch mode.

This uncertainty is unlikely to continue for long. Soon, we anticipate volatility to pick up. However, it is difficult to predict the direction of the next breakout.

If the BTC/USD pair breaks out of the 20-day EMA and sustains it, we anticipate a rally to $13,973.50. A breakout to new yearly highs will be a huge positive. Traders can wait for the price to sustain above $11,100 before initiating long positions. The stop loss can be placed below the recent lows.

Ether (ETH) remains positive as long as it trades above the uptrend line. However, the bounce from the line could not climb above the immediate resistance of $236. This shows a lack of buying at higher levels.

If the price breaks down of the uptrend line and the recent low of $192.945, traders who have bought near the uptrend line will be forced to liquidate their positions. The next support on the downside is way lower at $150. Therefore, buying at the current juncture is not advisable.

However, if the ETH/USD pair rebounds off the uptrend line and rises above $236, it will indicate strength. It will pick up momentum after scaling the 20-day EMA. Traders can wait for the price to sustain above the 20-day EMA before entering fresh positions. We should soon see a strong directional move.

XRP is trading inside a large range of $0.27795 to $0.45. Traders can trade the range by buying near the support and selling near the resistance but the price action tends to be volatile in between.

We did not suggest buying the dip closer to $0.27795 because the XRP/USD pair has been a laggard in the recent recovery. This shows a lack of interest among buyers to own it. The bounce off $0.27795 is facing selling close to the 20-day EMA.

On the other hand, if the bulls again defend $0.27795, the price will continue to trade inside the range. We will watch the price action for a few days and then decide whether to attempt a trade.

The buyers could not carry Litecoin (LTC) above the first hurdle of the 20-day EMA, which is a bearish sign. During its rally from the lows, the 20-day EMA had been a constant area of support, which has now turned into resistance. This shows that the sentiment has turned from buy on dips to sell on rallies.

However, if the support zone holds and the next rebound rises above the downtrend line, it will indicate strength. We will wait for the cryptocurrency to rise above $106 during the next rebound before recommending a trade in it.

Bitcoin Cash (BCH) is in a downtrend. The pullback from close to $250 hit a roadblock at the 20-day EMA. Both moving averages are sloping down and the RSI is in the negative zone, which suggests that bears have the upper hand. They will now try to sink the price below the critical support of $227.70. If the support breaks down, a drop to $166.98 is possible.

However, if the BCH/USD pair holds above the support and breaks out of the downtrend line, it will indicate a change in trend. The next move will either be a consolidation or the start of a new uptrend. We will watch the price action following the breakout and will recommend a long position if we spot a new uptrend.

Binance Coin (BNB) continues to be an outperformer. It remains strong as long as it trades above the uptrend line. The bulls pushed the price above the descending channel and the 20-day EMA, which is a positive sign. However, they are facing stiff resistance at the 50-day SMA.

If the BNB/USD pair does not give up much ground in the current fall and rebounds off the uptrend line, it will indicate strong demand. The subsequent rally above 50-day SMA is likely to retest the high at $39.5941.

Conversely, if the uptrend line cracks, bears will attempt to break down of the recent lows of $24.1079. If successful, a fall to $18.3 is possible. We remain neutral on the cryptocurrency at current levels.

EOS is in a downtrend. The pullback from the lows is struggling to ascend the overhead resistance at $4.4930. Both moving averages are sloping down and the RSI is in negative territory, which suggests that the bears have the upper hand.

If the EOS/USD pair slides below $3.8723, it can correct to $3.30, below which the downtrend will resume. Conversely, if the bulls push the price above $4.4930 and the 20-day EMA, the pair might climb up to the 50-day SMA. Buying in a downtrend can result in quick losses. Therefore, we suggest traders wait for the trend to change before attempting to buy.

Both moving averages have flattened out and the RSI is close to the center. This suggests a range formation in the short term. The boundaries of the range might be $107 and $190.

Contrary to our assumption, if bulls push the price above the 50-day SMA, a rally to $255.620 is probable. On the other hand, if $107 breaks down, a drop to $94.026 is likely. We do not find any reliable buy setups at the current levels, hence, we are not recommending a trade in it.

Tron (TRX) re-entered the ascending channel on July 19, which is a positive sign. The sharp pullback from just below the critical support of $0.022 shows strong demand at lower levels. It is currently facing resistance at the downtrend line.

If bulls succeed in keeping the TRX/USD inside the channel, the next breakout of the downtrend line will indicate strength. The next level to watch on the upside is $0.0356 and above it a rally to $0.040 is possible.

Conversely, if the pair turns down from the current levels and slides below the channel, it will indicate profit booking. The 20-day EMA has flattened out and the RSI is just below 50, which points to a consolidation in the short term. Due to the uncertainty, we are not recommending a trade in it.

Stellar (XLM) is range-bound between $0.080 and $0.145. The best way to trade a range is to buy closer to the bottom and sell at resistance. However, we did not suggest buying the first bounce off the lows because we anticipated selling at the 20-day EMA.

Our view will be invalidated if bulls defend the support zone and the next rebound carries the pair above $0.098. We will wait for buyers to gain the upper hand before suggesting a trade in it.

Which altcoins are vulnerable to a deeper correction? Let’s look at the charts