Will the outperformers of the past seven days extend their up move? Let’s consult the charts

Fidelity’s crypto arm Fidelity Digital Assets Services has applied for a license with the New York Department of Financial Services. If approved, the firm can start its custodial services in the state of New York. Both these services will address concerns of the institutional players and might hasten their arrival.

The cryptocurrencies have bottomed out and have started a new bull market that has legs to run. In an uptrend, the dips are a buying opportunity. Let’s see if we spot any buy setups in the top five market performers of the past seven days.

The Bitcoin SV (BSV) network will complete the Quasar upgrade on July 24, which will increase the default block size hard cap from 128MB to 2GB. After a few months of the upgrade, the cryptocurrency will be able to handle thousands of transactions every second. DRIVE Markets has launched trading in Bitcoin SV. Backed by these positive news, the digital currency has turned out as the top performer among major cryptocurrencies. It has rallied close to 25% in the past seven days. Can it continue its up move or will it witness profit booking at higher levels? Let’s analyze the chart.

The BSV/USD pair broke below the 61.8% Fibonacci retracement level of the rally this week, but lower levels saw sharp buying that has propelled the price right back up. This is a positive sign as it confirms demand at lower levels. The price can now reach $214.210 and above it $255.620. If the bulls propel the price to a new high, the uptrend will continue.

However, after forming large ranges in the past two weeks, we expect the volatility to cool down and the pair to enter a consolidation for a few weeks. The pair will turn negative if the price turns around from one of the overhead resistances and plummets below $107. Nonetheless, we give it a low probability of occurring.

Tezos (XTZ) is the second-best performer of the past seven days, rising close to 20%. Can it build on its momentum and start a new uptrend? Let’s see the chart.

The XTZ/USD pair is largely range-bound between $0.33 and $1.85. For the past three weeks, the bulls have managed to defend $0.902128, which is the 61.8% Fibonacci retracement of the recent rally. The bulls have not been able to push the price above $1.295480, which shows profit-booking at higher levels. Both moving averages are flat and the RSI is close to 50, which suggests that the digital currency might consolidate for a few more weeks.

Tron (TRX) CEO Justin Sun tweeted that something big will happen next week along with the Warren Buffet lunch. Sun has invited influential people in the crypto universe to join him for the power lunch with the legendary investor. The crypto community has kept its fingers crossed on the outcome of the meeting.

The TRX/USD pair had broken down of the channel last week. Though bears broke below the critical support of $0.022 during the week, they could not sustain the price at lower levels. Aggressive buying has propelled the price back into the channel. This is a positive sign.

There is a minor resistance at the downtrend line above which the pair can move up to $0.040. A breakout of this resistance can push the price to $0.050. The traders can wait for the price to scale above the downtrend line before buying. The stop loss can be kept at $0.020 because if this support gives way, a drop to $0.017740 and below it a retest of the yearly low is probable.

Litecoin (LTC) was recently named as the official cryptocurrency of the Miami Dolphins. This will increase the visibility of the cryptocurrency among NFL fans. With halving just a few days away, can the price resume its uptrend or will it remain range-bound? Let’s find out.

After failing to break out of the ascending channel a few weeks ago, the LTC/USD pair plummeted below the channel last week. The bears followed it up with a breakdown of the support at $83.65. However, they could not sustain the lower levels and the price has quickly bounced back. This shows strong demand at lower levels.

Currently, the bulls are facing resistance at the channel line. This line, which had previously acted as a support is likely to act as a resistance. Nevertheless, if the price climbs back into the channel, it will be a positive sign. The next level to watch on the upside is $140.3450. Therefore, traders can wait for the price to re-enter the channel and sustain it before buying. The stop loss can be kept at the recent lows of $76.

Our bullish view will be invalidated if the price turns down from the channel and plunges below $76. In such a case, a drop to $58 is probable.

Cosmos (ATOM) rallied close to 5% in the past seven days. Is this the start of a new uptrend or is this only a pullback in a downtrend. Let’s study the chart.

Due to a short trading history, we are analyzing the daily charts for the ATOM/USD pair. The pair has given up a lot of ground in the recent correction. It is currently attempting to bounce off the $3.6043–$3.4101 support zone.

The pullback is likely to face resistance at the 20-day EMA. The next fall towards the support zone will give us a better idea whether the bottom is in place. If the price breaks below $3.4101 during the next fall, it can retest the lows at $2.9277.

Conversely, if the pair rebounds off the support zone and breaks out of the 20-day EMA, it is likely to reach the 50-day SMA and above it $6.15. Therefore, traders can watch the price action during the next fall and buy on a breakout above 20-day EMA. The stops can be placed below $3.40.

OKB is the native token of OKEx, a world-leading cryptocurrency exchange. It is trading well above its listing price. The token offers its users opportunities to set up OKEx partner exchanges, settle trading fees and subscribe to new tokens sale on the OK jumpstart platform.

The total supply of OKB is 1 billion, out of which only 300 million is in circulation and the rest has been locked up until 2022. The long-term hodlers of the token will benefit from the OKB Buy-Back & Burn Program, which will be run every 3 months. Currently, the token is operating on the ERC-20 protocol but will soon migrate to the OKChain mainnet – being developed by OKEx — which is in its final stages of testing.

In its evaluation report, Shinobi Capital, an established blockchain and cryptocurrency advisory firm, expects OKB to benefit from the development of OKChain mainnet and better market conditions for cryptocurrencies. They expect OKB to hit a market capitalization of about $7.068 billion by 2020.

OKB has been listed on Bitfinex and is attempting to partner with other exchanges to further expand the ecosystem. At press time, the token is ranked 1,878 on CoinMarketCap with a 24-hour volume of $142,547,972. So, is this a good opportunity to scoop OKB before prices shoot up? Let’s look at the technical picture. 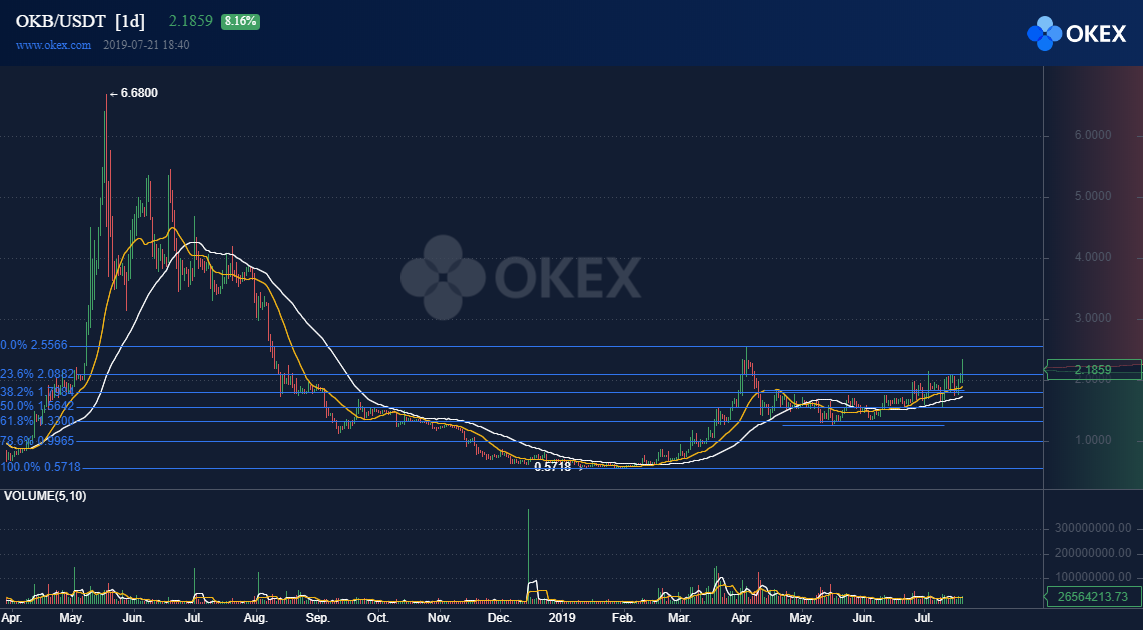 Currently, the price has broken out of the range and is likely to move up to $2.5566, which will act as a stiff resistance. If this level is scaled, the price can move up to $4 and above it to $5.40. Both moving averages are gradually sloping up, which suggests that bulls have the upper hand.

*Disclaimer: OKB is a featured cryptocurrency from one of Cointelegraph’s sponsors, and its inclusion did not affect this price analysis.

Will the outperformers of the past seven days extend their up move? Let’s consult the charts