Pariahs of Silicon Valley: How Ben Mezrich Writes About the Winklevoss Twins Ben Mezrich’s new book into the lives of the Winklevoss twins casts Mark Zuckerberg as the villian and the Winklevii as the heroes, but is it that simple?

The irony of a book about the Winklevoss twins’ journey into cryptocurrency — which stresses over and over again how important it has been to their legacy to eclipse their past dealings with Facebook and Mark Zuckerberg — getting published less than a month before Facebook’s secretive cryptocurrency project was unveiled to the world is almost too obvious a way to begin this book review.

“Bitcoin Billionaires: A True Story of Genius, Betrayal, and Redemption” is the latest book in a series of flashy exposés of some of the world’s biggest financial success stories from writer Ben Mezrich. Most well-known as the man that penned the book behind “The Social Network,” a movie that brought the Winklevii into the millennial zeitgeist as two tall, overly handsome, not-so-lovable Men of Harvard, Mezrich’s latest book explores the beginning of Facebook from the perspective of these mirror twins all the way through the making of their own billions in crypto.

However, the story behind the all-hail Mark Zuckerberg movie, “The Accidental Billionaires: The Founding of Facebook, A Tale of Sex, Money, Genius, and Betrayal,” shares a lot more than just a title full of billionaires, genius and betrayal — it now shares cryptocurrency.

Going back to the start, before this week when Facebook’s Libra project blew up both crypto and mainstream media, the Winklevoss twins were (and still are) arguably two of the biggest names in cryptocurrency. As a managing editor of a crypto publication, I’d been trained to look out whenever either of the twins said or did anything, as even a tweet of 120 characters from a Winklevii could get a story a high number of views.

Mezrich’s story gave me a new perspective on this Winklevoss celebrité: Apparently, before they became two of the kings of crypto, they were the black sheep of Silicon Valley. After the drawn-out court case between the twins and Zuckerberg over their right to a small part of Facebook due to their arguably initial idea that inspired Zuckerberg to create the global social network, Silicon Valley apparently cut the twins loose.

The way Mezrich writes it, these two newfound millionaires (who had insisted on taking part of their settlement in Facebook stock, an idea that is portrayed as over-exaggeratedly opposed by their lawyers at the time) just could not give their money away. Their pariah status comes to a head in a well-known-ish diner in the valley, when a visibly nervous potential startup founder rejects their money after a previous acceptance, appears scared to be seen with them (although this attitude begs the question, why had he agreed to meet the two very tall, large investors in such a public place?), and explains to them in much overwrought, sweaty detail why their money will never be welcome in Zuckerberg’s Silicon Valley.

While this particular conversation with this degree of specificity may or may not have taken place, Mezrich’s point is clear: The Winklevii were not welcome in Silicon Valley.

“‘Cryptocurrency,’ Cameron repeated, from his daybed. ‘It sounds criminal. Is it legal?’”

— to their fateful first meetings with Charlie Shrem —

“Cameron couldn’t help feel the nervous energy bleeding out of the kid — Charlie was actually trembling — or smell the hint of marijuana seeping from his plaid short-sleeve shirt and distressed khaki pants.”

— the mutual intense dislike between them and “Bitcoin Jesus” Roger Ver —

“As far as Ver was concerned, the Winklevoss twins, celluloid ‘Men of Harvard,’ were the Establishment’s wet dream.”

— and the eventual investment in both Shrem’s now-defunct BitInstant and bitcoin (BTC) itself, leaving the twins with 1% of the crypto’s entire supply.

Shrem, at this point, has become a major, manic character in both the book and the twins’ life. The book describes their relationship as being on friendly grounds for the majority of their connection to each other, although each time Charlie is introduced, his adjectives become more childlike and a bit more dismissive, up to the point that he is sometimes alluded to as the CEO of his favorite nightclub rather than of BitInstant.

By the time that Shrem is jailed, which coincides with the New York State Department of Financial Services’ infamous cryptocurrency hearings with the now-hated Ben Lawsky (the anti-crypto-legislator-turned-entrepreneur who advises New York crypto firms on how to follow the confusing laws he himself created), the twins have written Shrem off as a bad investment.

It would be interesting to see how Shrem has reacted to his characterization here, but he’s left me unread on Telegram since November 2018, when I texted him for comments about the Winklevoss’ now-settled lawsuit against him for theft of 5,000 bitcoin around this same time (which, for some reason, was not covered in Mezrich’s book).

Bitcoin Jesus Roger Ver is brought in by Mezrich in the role of Charlie’s best friend, mentor and antithesis to the Winklevoss twins. The Winklevii hate him, Mezrich makes that abundantly clear — to the extent that they will never meet with him in-person throughout most of the book.

This seems to be a rather extreme reaction as investors in a common project that has a relatively incomptentant CEO that they both know well, but Mezrich paints over their strange inability to even have a normal business conversation with Ver by portraying this Jesus character as what your mom would call a “very bad influence that you shouldn’t play with.” And thus, the Winklevii will not play with him.

The move from the Winklevoss twins owning bitcoin to starting a cryptocurrency exchange is explained very quickly, but the point behind the idea has been hammered into the reader’s head the entire book: The Winklevoss twins really, truly love regulation. And what better way is there to ensure regulation in the crypto space than to create an exchange, base the business in New York (the state with the most stringent crypto laws) and then make sure people regulate it?

And this is what the Winklevii have done. They started Gemini Capital, received the BitLicense for Genesis Global Trading, and they were the first to get the SEC rolling on whether or not to accept a bitcoin exchange-traded fund.

Back to the book, up to almost the present day, the ending trails off with an almost-unidentified man (surprise! it’s Mark Zuckerberg!) penning a ridiculous letter in January 2018 about his marathoning, Mandarin skills and newfound interest in cryptocurrency.

But this book’s author could not have predicted that more than a year later, when the book came out, Zuckerberg’s over-the-top Christmas missive would lead to a media frenzy surrounding the Libra Association, libra stablecoin, Libra Investor Token, and the list goes on.

All of this makes the similar titles of Mezrich’s books a bittersweet joke, especially when juxtaposed with the scene in the book in which the Winklevii are pleased that crypto-focused New York Times journalist Nathaniel Popper doesn’t use the word “Facebook” in the headline of his second article about the twins and crypto. Zuckerberg has definitely caught up to them in the crypto space célébrité, even though his project has been met with a significant amount of scorn over its decentralization — or lack thereof.

And to add insult to injury — depending on your opinion of Zuckerberg’s pettiness (mine was amplified by a very early scene in the book wherein the Facebook mogul insisted on only meeting with one twin during a mediation due to an apparent fear of being punched) — libra stablecoin, gemini dollar… can anyone here read a horoscope? 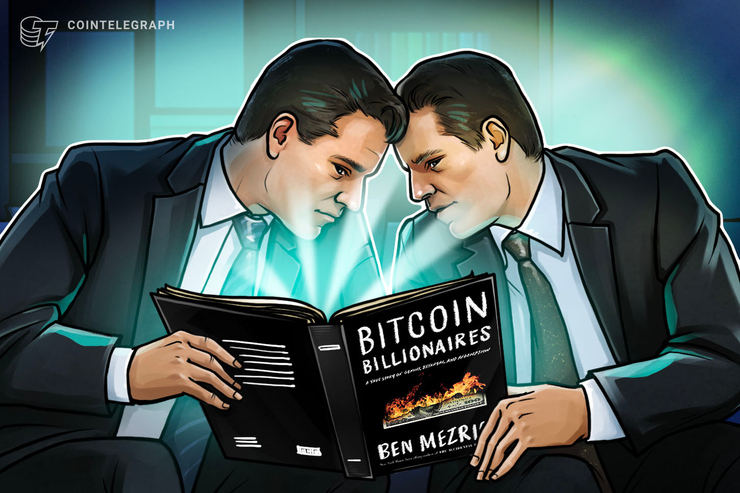 Ben Mezrich’s new book into the lives of the Winklevoss twins casts Mark Zuckerberg as the villian and the Winklevii as the heroes, but is it that simple?