In 2017, the cost of Bitcoin (BTC) reached almost $20,000, and in December 2018, its rate fell to $3,187 per token. Nevertheless, it is a solid price movement for a currency, which was created from nothing about 10 years ago. Bitcoin still dominates the portfolios of most crypto investors and is by far the most popular cryptocurrency, meaning its price is less prone to drops than the rest of the market.This is also indicated by the CoinMarketCap dominance chart. But what about the rest of the cryptocurrencies that have appeared over the past couple of years?

In 2018, CNBC reported that approximately 800 cryptocurrencies, which appeared as a result of initial coin offering (ICO), can now be called „dead,“ because they are traded at a price below $0.01. In 2019, this figure continued to increase.

Resources that specialize in “dead” cryptocurrencies have launched, such as Deadcoins and Coinopsy, according to which, in 2018, about 1,000 different cryptocurrencies failed. Many “dead” crypto projects were scams organized as ICOs and some could not stand the pressure of the bearish market in late 2018. That is how Jay Richler, co-founder of Coinopsy, described to Cointelegraph the huge number of failed coins listed in different exchanges:

“Before 2016, most failed due to just making a coin for fun, and then developers just gave up of pulled a small scam or pump-and-dump. After 2016, market got saturated with coins, so exchange listings now cost large amounts of $$$, for example Binance is like 1 million to get listed from memory. So after 2016, it was either well planed scams with funding and marketing or coins that started just didn’t have the funding and direction.This is most but not all.”

The Deadcoins’ team responded to Cointelegraph by saying that it is convinced that the main reason for cryptos failing is the lack of utility on their behalf:

“Many of the altcoins most probably to fail for many reasons, but the main reason will be the lack of utility and the use case or overlapping with other altcoin or their use case is already satisfied by BTC or other major coins.”

Here are our top-five dead cryptocurrencies — which were terminated by their founders — that turned out to be scams or had trading volumes of less than $1,000 for three months. Some entries in this list may come as a surprise. 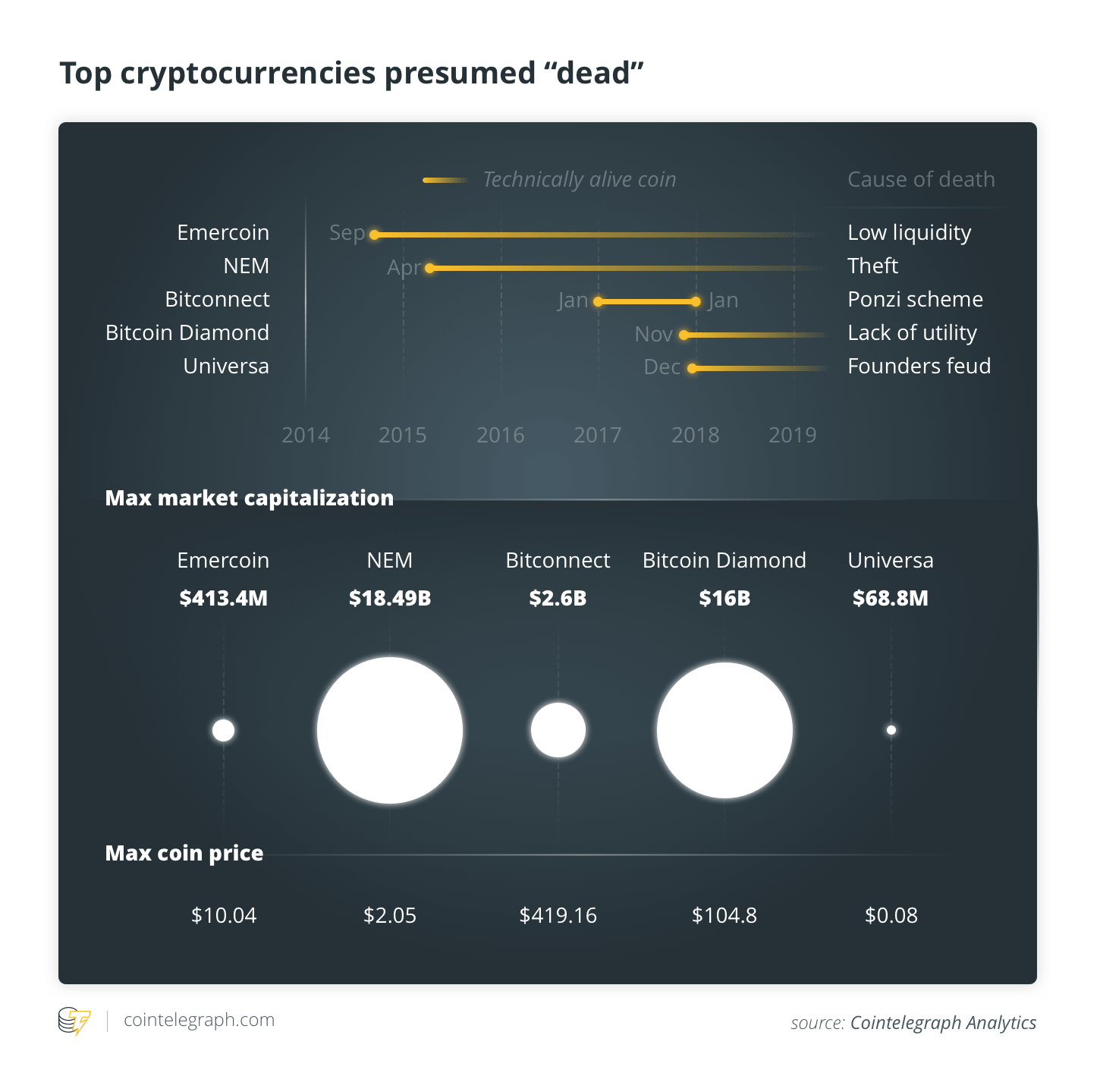 BitConnect tops this list of dead coins, as it is believed to be a fraudulent scheme — one of the largest in the history of crypto. The BitConnect project was accused of creating a large-scale financial pyramid.

BitConnect’s blistering invasion of the CoinMarketCap top-10 list, with a capitalization of $2 billion shortly after the launch of the project in January 2017, stunned many, and rumors of a dubious scheme began to spread rather quickly. However, only by the end of 2017 did cryptocurrency investors decide to publicly accuse the project of organizing an investment scam — a so-called Ponzi scheme.

One of the more prominent critics of the project was billionaire and well-known Bitcoin investor Mike Novogratz, who stated on Twitter that BitConnect really looks like a Ponzi scheme that hurts the image of the entire industry: “BitConnect really seems like a scam. an old school ponzi… bad actors hurt the community. period.”

The reason for all this resentment is the BitConnect lending program. The project promised significant bonuses for deposits in Bitcoin. But according to disgruntled users, the bonus payment mechanism remained opaque, and the nature of its origin was unknown. This led the community to suspect that the project represented a financial pyramid built on top of a multilevel referral system.

Many critics pointed out that the only possible source of bonus profits are deposits from new investors, but that information was kept secret by the founders of the project, whose identities were unknown. However, in early 2018, BitConnect was beginning to collapse. Texas and North Carolina regulators forced the founders to close the lending program and their cryptocurrency exchange, making the BitConnect (BCC) token redundant and subsequently causing it to depreciate. Then, one by one, collective lawsuits started to be filed against BitConnect, and United States authorities came to grips with investigating the activities of the project — whereby a U.S. court decided to freeze its assets.

NEM is used to make instant transfers and payments worldwide without large commissions. It can be purchased both online and for cash, as well as be used for exchange operations among other currencies. NEM has become a very popular cryptocurrency and now is in the top-30 currencies by the market capitalization indicator, according to Coin360.

However, one of the largest cryptocurrency exchanges in Japan, Coincheck, confirmed in January 2018 that a large scale theft of funds from the platform has taken place. A total of $123.5 million in the form of NEM tokens (XEM) was claimed. At the time, Coincheck suspended all operations with NEM and other altcoins. Meanwhile, unconfirmed reports were received that unknown attackers stole further $600 million worth of NEM from the exchange.

Shortly afterward, Coincheck representatives officially reported the total losses of 58 billion yen ($123.5 million). The exchange filed a statement with the Financial Services Agency of Japan (FSA) and local law enforcement agencies regarding the cyber attack. Also, representatives of Coincheck assured that they were studying ways to compensate users for the lost funds. Despite assurances from the NEM Foundation, the news of the Coincheck hack and the theft of such a large amount led to a sharp decline of XEM: The coin dropped sharply in a short period of time, and by February, its value was about $0.60 and is still floating around that level.

Price of NEM since its drop from all time high price of $2.05 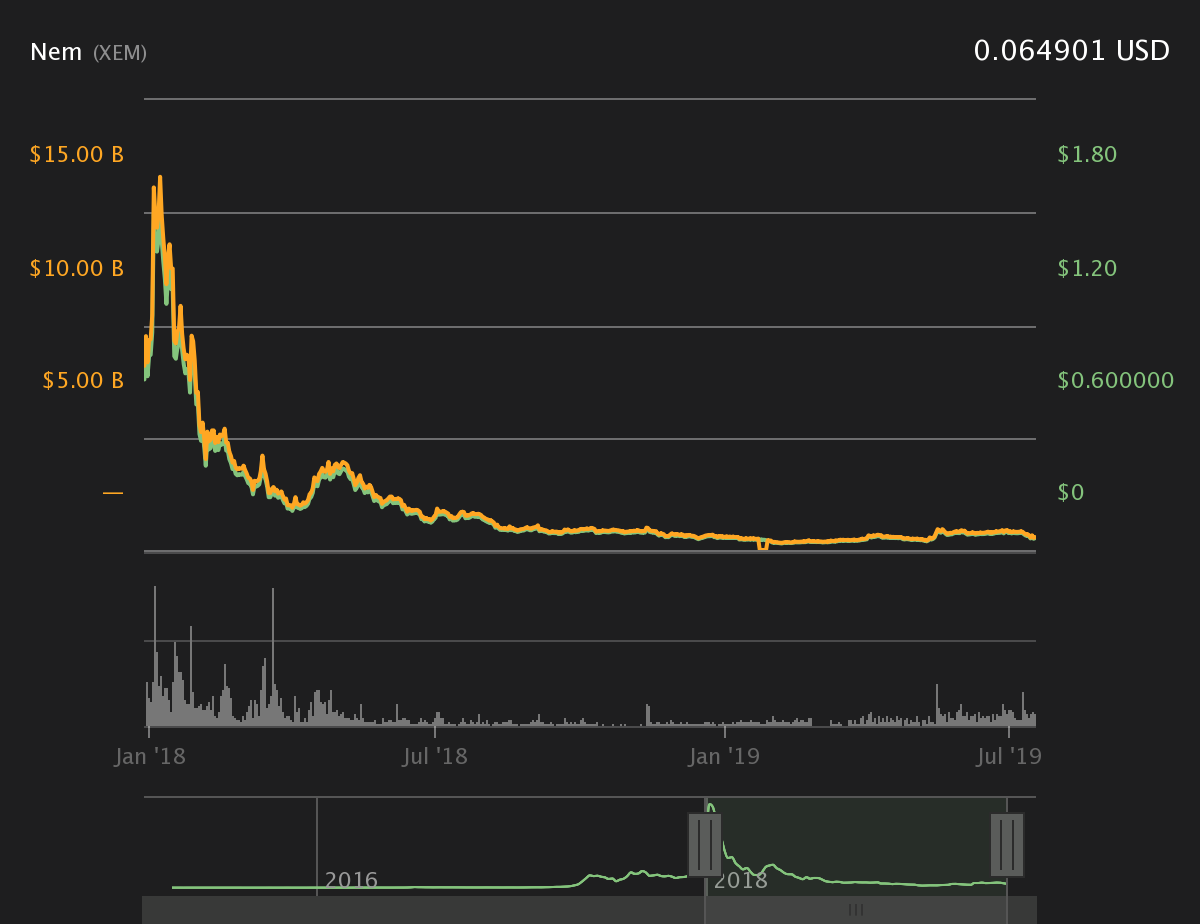 The Russian-based project Universa attracted $28 million during its token sale in December 2017. The stated goal was to create a blockchain platform for business applications based on the high-speed Universa blockchain protocol, with a capacity of up to 22,000 transactions per second (TPS). An important fact for the promotion of the project was the partnership with Ernst & Young (EY) — and one of the top Russian banks, Alfa Bank — and has certainly strengthened Universa’s image as a domestic blockchain industry pioneer.

The founder of MGT Capital Investments and the creator of anti-virus software McAfee Security, John McAfee, became a member of the advisory committee of the Russian blockchain project, headed by businessman Alexander Borodich. McAfee spoke about this at the time on Twitter:

“I am proud to become an advisor @Universa_news and build McAfee Coin on the fastest blockchain. Join the revolution/ICO today! universa.io.”

However, as soon as the markets cooled down, a conflict among the members of the project’s management became evident, which resulted in legal proceedings being filed following the accusations of damaging the business’s reputation among the founders of the project. But while the management of the company was figuring out their differences, the daily trading volume of tokens hardly managed to reach $42.000, the liquidity was almost absent and the HitBTC exchange delisted this cryptocurrency.

Bitcoin Diamond (BCD) is a fork of Bitcoin. This cryptocurrency was created in November 2017 as a result of the separation of the mainchain of Bitcoin after block #495866. The purpose of the cryptocurrency is the same as the original Bitcoin, as a means of payment that is convenient for online purchases. The BCD token was credited to all Bitcoin token holders automatically after the fork. The accrual was carried out at a ratio of 1 BTC to 10 BCD. Thus, the maximum number of BCD tokens cannot exceed 210 million tokens, while 170 million tokens were released immediately and distributed among Bitcoin holders.

The roadmap of the project promised that, by the beginning of 2020, Bitcoin Diamond should surpass Bitcoin in terms of its use cases. But the development plan has left a lot of uncertainties, with the main question being: When will work on the BCD token be competed?

As per Coin360, Bitcoin Diamond‘s capitalization is at around $140.5 million, and the cost of the tokens from the moment of listing has almost constantly been decreasing. At the time of the fork, BCD’s price reached $85 per token. Currently, one coin costs in the region of $0.80, marking a drop of almost 100%. Major players in the crypto market have voiced their concerns regarding the project — with Ledger, for example, stating that Bitcoin Diamond was involved in fraudulent schemes at the end of 2017:

According to the statement, customers switched to websites related to cryptocurrency, on which they were asked to enter a password, and their BCD tokens were subsequently stolen in a classic case of website cloning.

It may seem surprising that a traded token is on this list, but Emercoin can be attributed as a loser in the world of cryptocurrencies.

The project started in 2013, but it appeared on the lists of popular exchanges only in 2014. The Emercoin cryptocurrency was conceived as a payment tool on the internet. Presently, Emercoin serves only as a means of payment. In other words, this is money for buying goods — such as games, clothes, programs, etc. But this didn’t offer anything interesting or present attractive options for buyers. However, the developers are claiming that, in the near future, Emercoin will become a unique platform that will protect websites, copyright, etc.

Despite the efforts of the creators, Bittrex announced at the end of June 2019 the withdrawal of several low-liquidity altcoins, including the Emercoin token — EMC. According to Coin360, the coin is at the 493 line, per the capitalization indicator.

Only the strong survive

No matter how low the price of a cryptocurrency falls, it can go even lower until it reaches zero, as was the case of BitConnect. Under the conditions of a downward market trend, all levels of support can be broken through on the way to full depreciation. That is why investors should stay away from low-liquidity instruments, which do not possess a stable influx of money, especially when those instruments begin to fall. Those who invest in it fall into a trap: Even if investors want to sell a falling crypto currency, they cannot — due to the lack of buyers — and are forced to watch their funds melt away. Richler Vanierwitz from Coinopsy told Cointelegraph how some nonliquid coins can come to life for a while, but then die:

“We were working on uncovering a big scam around local wallet with cryptocurrencies. There were around 500 coins in the wallet, but over time owners of this coins lost 80-90% of funding on these coins, but they kept making more. Through the time the owners revived this coins as new ones and listed again in some exchanges and for a short time the cost of these coins grew again but soon died. So I would not recommend buying any revived coin. Some other coins just get removed from one exchange then few months later get on a new one. Many reasons of the fall.”

Peter Brand, a financial analyst and trader, who correctly predicted an 80% drop in the cost of Bitcoin last year, takes a harsher stance, saying that only a few cryptocurrencies have a future ahead of them:

“Cryptos developed because of BTC. The cryptocurrency story is a Bitcoin story. It is difficult for me to specifically name those coins that will be worthless, but I genuinely believe that 99% will become worthless because their origination was driven by an attempt of a person, company or consortium to ride the coattails of Bitcoin. I believe that LTC and ETH have a good chance to retain value because of their already mass acceptance. On the other hand, I believe that niche coins (developed to address very specific purposes) and coins largely controlled (such as XRP) face an uphill journey.”