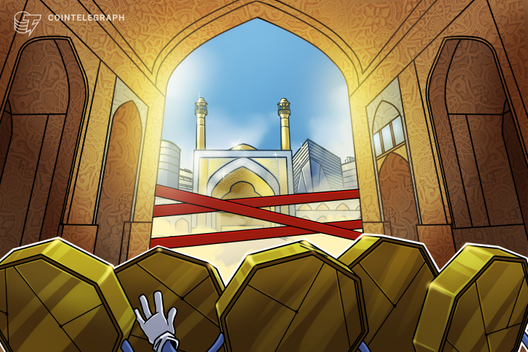 Iranian authorities are wrestling with the rising number of citizens turning to Bitcoin mining and use as a means of coping with a sanctions-crippled economy.

Iran’s minister for information and communications technology, Mohammad Javad Azari Jahromi, told the Associated Press (AP) that the country has become “a heaven for miners,” according to a July 18 report. He noted:

“The business of ‘mining’ is not forbidden in law but the government and the Central Bank have ordered the Customs Bureau to ban the import of [mining machines] until new regulations are introduced.”

An ailing economy fuels cryptocurrency production and use

In the wake of toughened U.S.-led sanctions, Tehran is now facing the specter of hyperinflation. Oil export revenues have tanked by almost 90%, new data reveals, unemployment is veering close to 20% and millions are working below national poverty-line estimates.

As AP reports, subsidized electricity rates — currently at half-a-cent per kilowatt — have fueled a thriving crypto mining community, although this is now set to change. Police raids on mining farms are being televised to disincentivize citizens and Iran’s Electrical Industry Syndicate has revealed its intention to hike up electricity prices to 7 cents per kilowatt.

Beyond mining, cryptocurrencies have made national headlines due to authorities’ concern that locals could be using them to convert the rapidly devaluing rial into other currencies.

In 2018, the head of the Iranian parliament’s economic commission, Mohammad Reza Pour-Ebrahimi, revealed that roughly $2.5 billion had been funnelled out of Iran via crypto — yet the matter has not been publicly raised since.

Even as the U.S. purportedly attempts to muscle in on Iranians’ mining and use of crypto to bypass sanctions, local officials have underplayed its systemic importance. Jahromi remarked:

“Cybercurrencies are effective in bypassing sanctions when it comes to small transactions, but we do not see any special impact in them as far as mega-transactions are concerned. We cannot use them to go around international monetary mechanisms.”

Is Bitcoin halal or haram?

Cryptocurrencies have even caught the attention of the ayatollahs, with the conservative newspaper Tabnak citing three theologians’ opinions that Bitcoin is either problematic or definitively forbidden — haram — under Islamic law. Yet the matter remains open to debate, as Jahromi noted:

“Some of our top clerics have issued fatwas that say Bitcoin is money without a reserve, that it is rejected by Islamic and cybercurrencies are haram. When we explain to them this is not a currency but an asset, they change their mind.”

As reported, Iranian authorities have ratcheted up their mining crackdown this summer, confiscating ~1,000 units of mining machines from two now-defunct factories and cutting off power to miners ahead of the planned energy price hike. Some miners are allegedly weathering the authorities’ U-turn by taking refuge in the country’s mosques, which the government provides with free energy.