Appetite for Blockchain Tech Builds Among Korean Banks, but Without Crypto 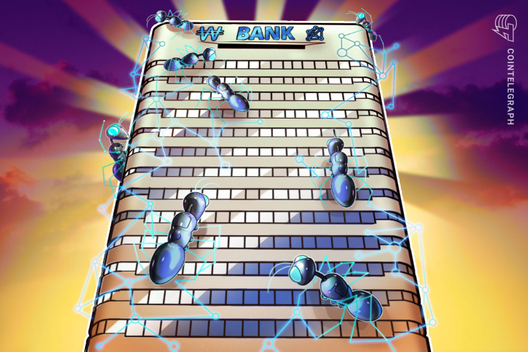 In recent weeks, major South Korean financial institutions have rolled out a number of services incorporating blockchain technology, especially in the areas of Know Your Customer (KYC) procedures and security. Fintech has become a buzzword for local banks trying to keep up with the change of the times.

The banks, however, are not looking into an important part of blockchain, which is digital assets, says one influential Korean advocate of alternative currency. In order to assess the Korean blockchain space, it is important to understand how the trend affects existing players and the cryptocurrency market.

Blockchain as a ledger

Shinhan Bank, the first bank to be established on the peninsula, incorporated blockchain into its lending services on May 27.

The bank’s “Blockchain Verification System” allows users to receive evidential documents on private enterprises. Through this system, it has shortened the process from two to three days to almost instant verification.

KB Kookmin Bank, one of the largest banks in the country, signed a memorandum of understanding (MoU) with blockchain firm Atomrigs Lab, as Cointelegraph reported June 11. The partnership is designed to explore digital asset management and protection solutions.

What differentiates Atomrigs Labs from other blockchain developers is that it specializes in the financial sector and is known to have the technology to retrieve private keys in case of loss.

The latest move is part of KB Kookmin’s strategic blueprint to make the promotion of digital transformation a priority. Last year, the bank announced it will focus on technological improvements using the acronym “ABCDE” — standing for artificial intelligence, blockchain, cloud, data and ecosystem.

KB Kookmin has also signed an MoU with LG Corp., and is currently developing a joint product currently being called Magok Pay. The nickname comes from where the LG Science Park is located in Seoul.

The payment system using LG CNS’ technology, the IT subsidiary of the umbrella company, is aimed at allowing users to pay with tokens on their smartphones without cash or a bank card.

In turn, the retail lender will pay the amount and manage the transactions in fiat. It was ranked the world’s 60th-largest bank in 2017 based on Tier 1 Capital.

Since April, NH Savings Bank started offering a peer-to-peer financial certificate service, which aims to prevent the tampering of records of receivable principal and interest. More recently, it has also opened a new training course to some of its workforce to groom them to be well-versed in digital ledger systems.

The bank is an extension of the National Agricultural Cooperative Federation’s financial operations and serves some 20 million customers.

In an interview with Cointelegraph, Sung-jung Kim, the head of Asia for Cindicator — an analytics provider of traditional and digital assets using collective intelligence and machine learning models based in Seoul, St. Petersburg and New York — said the recent race to blockchain adoption by Korean retail banks can be categorized into either the institutions developing their own private blockchains or searching for hybrid options that are already available in the market. According to Kim:

“The Korean economy is heavily dependent on a few large institutions within the nation and as these institutions continue their pursuit for appropriate blockchain solution, we expect more resources to be deployed to enrich the blockchain landscape, especially towards domestic projects.”

It is worth noting both KB Kookmin and NH Savings bank came under regulatory scrutiny last year from Korea’s Financial Supervisory Service (FSS). In its joint review of the banks, the financial watchdog criticized their management of cryptocurrency transactions in regard to Anti-Money Laundering (AML) regulations.

The FSS is Korea’s integrated banking regulator that examines and supervises private lenders under the oversight of the Financial Services Commission.

Later this year, the bank also plans to issue debit cards that double as ID cards to university students.

Using the digital ledger, the reissuing duration will be shortened to three days from the current three weeks, in case of loss. Korea University students will be the first beneficiaries of this service.

Woori Bank is also working to launch a blockchain-based international wire transfer service. The bank already has a strong presence in India and China and is now working with the Japanese bank consortium SBI Ripple Asia to prepare a pilot.

Despite these developments, there has been a lack of interest in using the technology for settlement, payment and the use of cryptocurrency.

One of Korea’s biggest crypto influencers, Hyun-sik Choi, better known as Soso to his 40,000 viewers and subscribers, believes more needs to be done:

“Korean banks are jumping into the blockchain field. While this proves there is huge interest in the technology from traditional finance, all the attempts are on the tech side. They are ignoring the cryptocurrency part.”

The longtime crypto advocate explained there are two main reasons.

The government separates cryptocurrency from the blockchain technology and only supports the latter. A smaller but definitely noticeable part is that some companies use the term blockchain more as a marketing tool rather than a real solution.

Cindicator’s Kim is hopeful the technology’s overall adoption by traditional market participants can bring about desired influence to digital money:

“We view this as a positive development for the Korean crypto market. These developments can also be seen in the light of the high interest the Korean population has in crypto assets, probably leading to banks wanting to participate in the potential boom.”

From hoodies to suits

With the spike in blockchain adoption by traditional financial institutions comes the change in the players’ demographic.

On June 11, the Korea Blockchain Association announced its nomination of Gap-soo Oh, former deputy governor of the Financial Supervisory Service, as its next chairman. He is scheduled to be sworn in on June 24 during a general meeting.

As Cointelegraph has reported, 70-year-old Oh is now serving as the president of the Global Finance Society, and previously worked as deputy chief of the Standard Chartered Bank Korea, and as an external director at KB Kookmin Bank.

In recent months, more former civil servants and traditional bankers have switched over to digital assets. Crypto watchers in the country are welcoming this trend.

Jun-heon Hwang — better known for his blog Coin Student — says the merging of traditional and digital finance worlds is part of a wider trend across the globe:

“Overseas, traditional financial firms have already entered the digital assets market and that includes its workforce. There are enough young CEOs in the space. To systemize blockchain incorporation, onboarding of established bankers and civil servants in this sector is not only inevitable but necessary.”

Following the money — in fiat

The strong inclination to adopt the new technology comes on the back of staunch support from Seoul.

The government of South Korea nearly doubled its projected spending on blockchain development for selected cities around the country for this calendar year from the same period last year.

Whether the support for the ledger side of blockchain technology will eventually lead to a trickle-down effect on cryptocurrency in the future in South Korea remains to be seen.

For now, all eyes are on how Korean buyers will affect the global market if — or when — the government relaxes its regulations on digital assets. If the East Asian country’s influence on the price of major coins is any indication, domestic buyers are expected move with unforeseen alacrity.