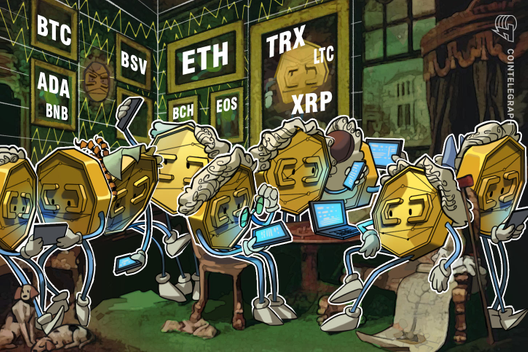 Will the crypto markets correct and allow traders to buy on the dips? Let’s look at the charts

Bitcoin (BTC) has continued with its stellar run as no resistance level is being able to hold it back. It easily covered a distance from $10,000 to $13,000 within five days. This shows massive buying that has seen its market dominance reach 62.1% for the first time since April 2017. The recovery in the crypto markets is being led by the leader, which is positive for the asset class.

With this recovery, bitcoin once again rises from the dumps as the doubters continued to write its obituary. Its low correlation with other traditional asset classes makes it an interesting bet for the institutional players wanting to diversify their portfolio due to the ongoing geopolitical tension and trade issues. Deutsche Bank exec Jim Reid said that aggressive rate cuts by central banks was also a contributing factor in the recent surge in bitcoin prices.

Data from institutional crypto lender Genesis Capital shows a significant increase in institutional activity in the past 12 months. While the rise is parabolic and is not sustainable, an important factor is that the rally had been climbing a wall of worry until it broke out of $10,000. Since then, analysts have again started to project sky-high targets for bitcoin. When that happens and it becomes easy to make money, a short-term top is likely.

Contrary to our assumption, bitcoin easily cleared the $12,000 and $13,000 overhead resistance levels on the same day. Such strong buying near critical resistance levels suggests huge demand. When the momentum is so strong, it is difficult to point a particular level where the rally will stall. Still, traders can keep a few targets in mind.

However, the RSI has reached close to 89, which indicates that the rally is hugely overbought in the short term. Even in the previous bull phase, the highest reading recorded was about 93 on the RSI. This shows that the markets are vulnerable to a sharp pullback.

In this leg of the rise, the BTC/USD pair has soared vertically without even attempting to form a base at any level. Therefore, on the way down, the nearest logical support is way lower at the 20-day EMA. After such a sharp up move, we anticipate the volatility to remain high for the next few days. At the risk of being left out, we believe that the pair does not offer any buying opportunities at the current levels as the risk to reward ratio is heavily skewed to the downside.

Ether (ETH) has broken out of the overhead resistance at $320.840. If the bulls close (UTC time frame) the price above this level, it will complete a rounding bottom pattern, which is a reversal formation and has a target objective of $557.43.

Both the moving averages are trending up and the RSI is in the overbought zone, which suggests that the bulls are in command. We will wait for a retest of the breakout level before recommending a long position in it. The ETH/USD pair will indicate weakness if the price reverses direction and plummets below $320.840.

Ripple (XRP) held the pullback to the breakout level of the symmetrical triangle on June 24. This is a positive sign. Both the moving averages are sloping up and the RSI is in positive territory, which shows that the bulls are in command. They will now try to push the price above the overhead resistance of $0.50500. If successful, it can move up to $0.57259 and above it to $0.6250.

Contrary to our expectation, if the XRP/USD pair fails to gain ground, it can dip back to the breakout level of the triangle once again. The 20-day EMA is just below this level, hence, we expect it to act as a strong support; but if it breaks down, a drop to the 50-day SMA is probable. Traders can trail the stop loss on the long position to $0.43.

Bitcoin cash (BCH) is attempting to resume the up move. The price can now move up to the resistance line of the channel. This had proved to be a major barrier in the past but if the bulls can scale above the channel, a rally to $639 and above it to $889 is probable.

Litecoin (LTC) dipped to the 20-day EMA on June 25, but held it. The bulls will now again try to break out and sustain above $140.3450. If successful, the uptrend will resume that can carry the price to $158.91 and above it to $184.7949. The up-sloping moving averages and the RSI in the positive zone show that bulls are at an advantage.

If the LTC/USD pair fails to scale above the overhead resistance, the bears will attempt to sink it below the 20-day EMA. If this support cracks, the uptrend will lose momentum and a drop to the 50-day SMA is probable. Therefore, traders can retain the stop loss on the remaining long position to just below the 20-day EMA.

EOS corrected to the breakout level of $6.8299 on June 25. Currently, the bulls are attempting to bounce off the support. If successful, a rally to the resistance line of the channel is likely. If this level is scaled, the up-move can reach $8.6503. Both the moving averages are sloping up gradually and the RSI is just above the midpoint. This suggests a slight advantage for the bulls.

However, if the bulls fail to keep the EOS/USD pair above $6.8299, it can fall to support line of the channel. We anticipate the buyers to defend this support, as they have done in the past but if the support cracks, the pair can plummet to $4.4930. Therefore, traders can protect their long position with stops at $6.40.

Binance Coin (BNB) dipped below the 20-day EMA on June 25, which triggered our stop loss suggested in the previous analysis. While the price dipped below the 20-day EMA, it could not sustain below it, which shows buying at lower levels. The bulls will again attempt to resume the uptrend that has a target objective of $46.1645899 and above it $50. With both moving averages sloping up and the RSI in positive territory, the path of least resistance is to the upside.

The only bearish point on the chart is the negative divergence on the RSI. If bulls fail to sustain above $40, the BNB/USD pair might consolidate between $28 and $40 for the next few days. The uptrend will weaken if the price breaks down of the 50-day SMA. A breakdown of $28 will indicate that bears have the upper hand and a change in trend is likely.

Bitcoin SV (BSV) has been trading near the lifetime highs of $255.620 for the past four days. This is a positive sign because it shows that bulls are not keen on booking profits yet as they expect another leg up.

Both the moving averages are sloping up and the RSI is close to overbought zone. This shows that bulls have the upper hand. The next leg of the up-move will start on a breakout and close (UTC time frame) above $255.620, which can propel the BSV/USD pair to $307.789 and above it $340.248.

On the other hand, if the bears sink the pair below the uptrend line and the 20-day EMA, it will lose momentum and can plummet to the 50-day SMA. We will wait for the price to make a new high and sustain it before proposing a long position in it.

Cardano (ADA) has broken out of the resistance at $0.10. This is a positive sign as it completes two bullish setups: an ascending triangle pattern and a rounding bottom pattern. These patterns have a target objective of $0.1407239 and $0.171729 respectively. If these levels are crossed, the rally can even extend to $0.20.  Both the moving averages are sloping up and the RSI is in positive territory, which suggests the bulls have the upper hand.

Therefore, traders can buy on a breakout and close (UTC time frame) above $0.10 and keep an initial stop loss of $0.070, which can be raised later. There is a minor resistance at $0.111510. If the price struggles to break out of it, traders can close their positions. However, as the ADA/USD pair has consolidated close to $0.10 for the past many days, we expect $0.111510 to be crossed easily.

Tron (TRX) is facing resistance just above $0.040. On both June 2 and 25, the bulls pushed the price above the resistance but could not sustain it. However, both moving averages are sloping up and the RSI is in the positive territory. This suggests that bulls have the upper hand.

If the TRX/USD pair rises and sustains above $0.040, it can rally to $0.50. On the other hand, if the price reverses direction from the current level, it can fall to the 20-day EMA. If this support also cracks, the pair can correct to $0.029. The risk to reward ratio is not attractive, hence, we are not suggesting long positions in it yet.

Will the crypto markets correct and allow traders to buy on the dips? Let’s look at the charts