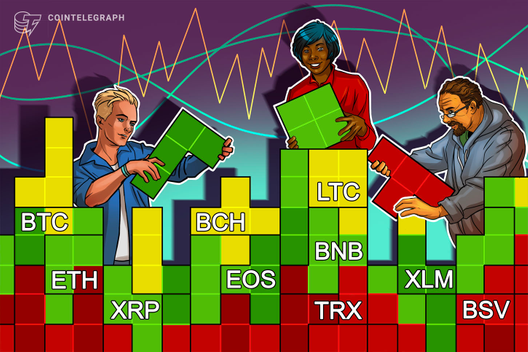 Has the market bottomed out or will the correction extend after a relief rally? Let’s look at the charts

The sharp recovery from the lows led by Bitcoin was largely based on the pretext that institutional players had finally started to take greater interest in the asset class. The sharp uptick in Bitcoin futures volumes and increased demand for Grayscale Bitcoin Trust shares was thought to be indicative of this.

However, Binance’s chief executive Changpeng Zhao, in an interview with Bloomberg, said that there has been an equal growth in both institutional and retail trading. The retail traders still account for about 60% of trading volume at Binance, which shows that institutional trading growth “has not increased that tremendously in 2019 yet.“

Strong opposition to Facebook’s Libra project and negative tweets by United States President Donald Trump gave reasons for bulls to book profits. Though some major altcoins have corrected close to their yearly lows, Bitcoin is still holding well above it. Hence, we are viewing the current fall as a buying opportunity. Should traders buy now or wait for lower levels? Let’s analyze the charts.

Bitcoin (BTC) broke below the symmetrical triangle on July 14, which is a bearish sign. The 20-day EMA is flattening out and the RSI is just below 50, which suggests a balance between buyers and sellers.

Currently, the BTC/USD pair is attempting to bounce off the 50-day SMA. The bulls will face stiff resistance at 20-day EMA but if they succeed in pushing the price above it, a rally to the resistance line of the triangle is probable.

However, if the price reverses direction from the 20-day EMA and plummets below the 50-day SMA, it can drop to $8,900 and if that level also breaks down, the next support is way lower at $7451.63. As the pair has been strong and is still quoting above its 50-day SMA, we remain bullish on it. However, we will wait for the price to show signs of a turnaround before recommending a long position in it.

The bulls could not push Ether (ETH) above 50-day SMA on July 12. The price turned down sharply and broke below the next support of $224.086. Currently, the digital currency is attempting to bounce off the uptrend line.

The moving averages are on the verge of a bearish crossover, which shows that bears are back in the game. A breakdown of the uptrend line will be a negative sign that can result in a deeper correction to $160.

Conversely, if bulls succeed in sustaining the price above $224.086, it will indicate demand at lower levels. Any rally will face stiff resistance at the 20-day EMA. We will wait for the price to trade above $224.086 for a few days before suggesting a long position in it.

Ripple (XRP) has been among the worst-performing major cryptocurrencies. It did not participate in the recovery and has fallen sharply when the sentiment turned negative. The next supports on the downside are at $0.27795 and below it at the yearly low of $0.24508.

Both the moving averages have turned down and the RSI is close to oversold territory. This suggests that the bears are in command. A breakdown to new yearly lows will be a huge negative for the cryptocurrency.

However, the XRP/USD pair has not closed (UTC time frame) below $0.27795 since mid-December last year. Hence, we anticipate buying close to the support. Any attempt to recover will face stiff resistance at the 20-day EMA. We will wait for buyers interest to return in the pair before recommending a trade in it.

Litecoin (LTC) has broken down of the ascending channel. It is currently bouncing off the next support of $83.65. The 20-day EMA is sloping down and the RSI is in oversold territory, which suggests bears are in the driver’s seat. If the digital currency breaks down of $83.65, it can drop to $66.

Conversely, if the LTC/USD pair bounces off $83.650 and re-enters the channel, it will be a positive sign. Any recovery will face selling at the 20-day EMA. We will wait for the price to sustain inside the channel before suggesting a trade in it.

Bitcoin Cash (BCH) is in a downtrend. It is trading inside a descending channel. The 20-day EMA is sloping down and the RSI is close to oversold territory, which suggests the bears are in command.

The bulls are currently attempting to keep the BCH/USD pair inside the channel. If successful, the price can move up to the resistance line of the channel. A breakout of the channel will be the first sign of a trend change. However, if the price breaks down of the channel, the next support is at $227.70. If this support also cracks, the correction can reach $166.98.

EOS plunged below the first support of $4.4930 on July 14 and has bounced off the support at $3.8723. Both the moving averages have turned down and the RSI has dipped into the oversold zone, which shows that sellers have the advantage.

The pullback in Binance Coin (BNB) reversed direction from the 20-day EMA and broke below the critical support of $28.7168. Currently, bulls are attempting to hold the uptrend line. Both the moving averages have completed a bearish crossover for the first time in 2019. This signals a likely change in trend.

If the BNB/USD pair breaks down of the uptrend line and the descending channel, it will turn negative and can drop to the next support at $18.30. Conversely, if bulls defend the uptrend line, it will try to move up to the resistance line of the descending channel. A breakout of the moving averages will indicate strength. Though it has been one of the outperformers, we will wait for it to resume its up-move before proposing a trade in it.

Bitcoin SV (BSV) broke below the descending channel and the critical support of $134.360 on July 14. When the price easily breaks through important support levels, it shows that sellers are in a hurry to get out and buyers are not willing to step in. This is a bearish sign.

Both moving averages have completed a bearish crossover and the RSI has dipped into oversold territory. This shows that bears are in command.

Tron (TRX) plunged below the trendline of the ascending channel on July 14. This is a bearish sign because this is the first instance when price has broken down of the trendline since the end of November last year. The 20-day EMA is sloping down and the RSI has dropped close to the oversold zone. This suggests bears are in command.

The next support is at $0.022 and if that breaks, the fall can extend to $0.017. However, before that, we expect a retest of the breakdown level. If the bulls can push the price back inside the channel, the current breakdown will be considered as a bear trap. Nevertheless, if the price fails to stay inside the channel and turns down, it will confirm a downtrend. We will get a clear picture within the next few days. Until then, we suggest traders remain on the sidelines.

Stellar (XLM) dipped below $0.085 but found support closer to $0.080. Hence, it might remain range-bound between $0.08 and $0.145. Both the moving averages are sloping down and the RSI is close to the oversold zone. This shows that bears have the upper hand.

If the XLM/USD pair plunges below $0.080, it can retest the lows at $0.072545. A breakdown to new yearly lows will be very negative. However, with the $0.080–$0.085 support zone holding, bulls will try to keep the pair inside the range. The first resistance on the upside is at the 20-day EMA. A breakout of it will be a sign that the bulls are back in the game. Therefore, we suggest traders wait for the price to bounce off the support and rise above 20-day EMA before initiating a long position.

Has the market bottomed out or will the correction extend after a relief rally? Let’s look at the charts