Venezuela’s government reportedly accepts Bitcoin as a payment method for some passport applications.

Venezuela’s Administrative Service for Identification, Migration and Foreigners, known as SAIME, plans to accept bitcoin (BTC) as a new payment method for citizens seeking a Venezuelan passport. The information was originally leaked via a Reddit post on June 23.

News of the update soon reached Twitter, with some Venezuelan users abroad confirming the information. Cointelegraph Spanish managed to verify this news as well. 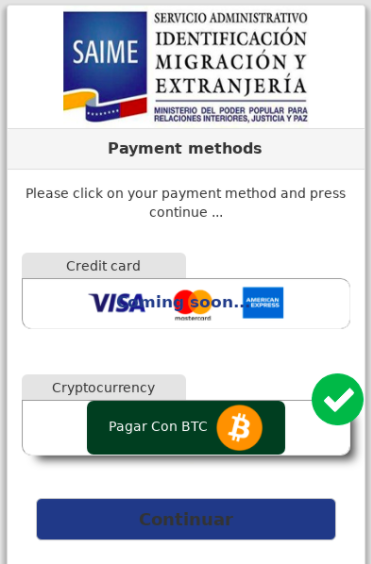 „I have just verified it personally and it is totally true. #Venezuela, the immigration service, is accepting bitcoin for payments. Renew passport or request an extension,“ wrote Twitter user, BTCLovera.

Similar payments can already be made in the country using Venezuela’s own pseudo-cryptocurrency, the Petro (PTR). Before now, the only other option was to purchase with bolivares through the national bank.

Not available to Venezuelans in Venezuela

Surprisingly, the option does not seem to be available to users actually living in Venezuela. Even the author of the original Reddit post said he was unable to reverify the option just a few hours after it was published.

SAIME has yet to officially confirm the new payment option in any capacity. It is not known how long the system has been enabled, or if there is a specific user profile type required to access Bitcoin payments.

For the issuance and management of payment addresses, SAIME has implemented BTCPayServer — a well-known BTC payment processor created by Nicolás Dorier. The system appears to use its own exchange rate at supposedly below-market prices.

Though the UI indicates that credit card payments will also be enabled, it is not clear whether this method will incur additional fees or penalties.

This developing news could reflect an evolution in the Venezuelan government’s stance towards the Petro. Maduro’s regime recently announced that almost 15% of all fuel payments across the country were made using the Petro.

Such statistics indicate a sharp rise, likely boosted by a new state-backed plan to promote the widespread use of the token.

Felipe Erazo contributed to this article.

Venezuela’s government reportedly accepts Bitcoin as a payment method for some passport applications.