Bitcoin price (BTC) performed as expected over the past week as 8% was shaved off its price of $7,571.80 between Dec. 8 and Dec. 14. Does this mean the digital asset is due for a reversal? As much as Bitcoin holders and I want this, one has to look at the facts.

Currently, Bitcoin has a distinct lack of bullish indicators that offer any hope of a short term reversal and even John Bollinger, the founder of the Bollinger Bands indicator tweeted out this somewhat cryptic tweet on Dec. 13.

“Most cryptocurrencies are at or near Bollinger Band Squeeze levels. Time to pay attention.”

For those that don’t know what this means, allow me to explain. 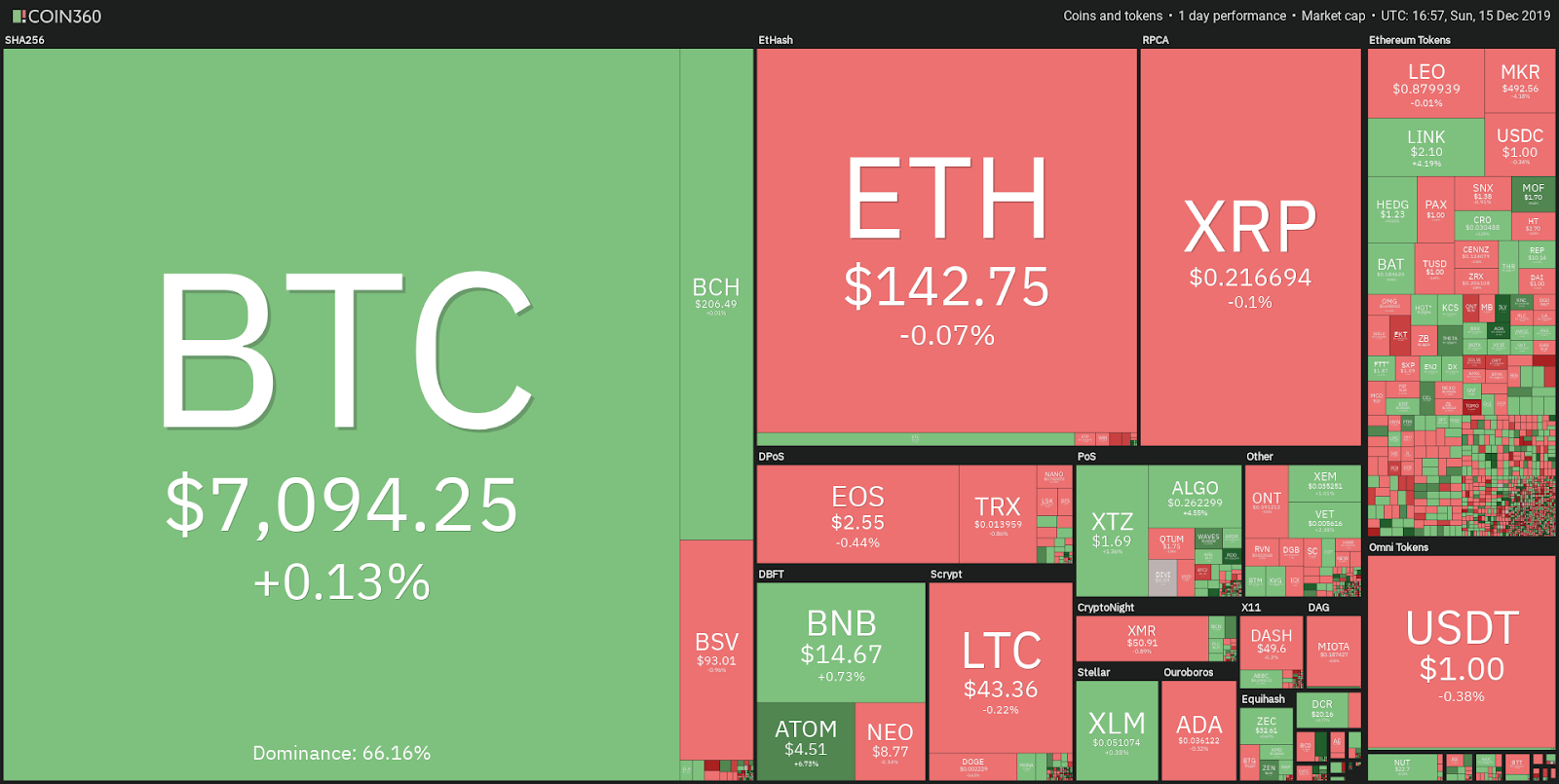 What is a Bollinger Bands squeeze?

The Bollinger Bands indicator is a tool that many traders can’t live without. Made up of 3 lines, the central line in red is the moving average (MA) and the lower band serves as dynamic support, whilst the upper band serves as a dynamic resistance. 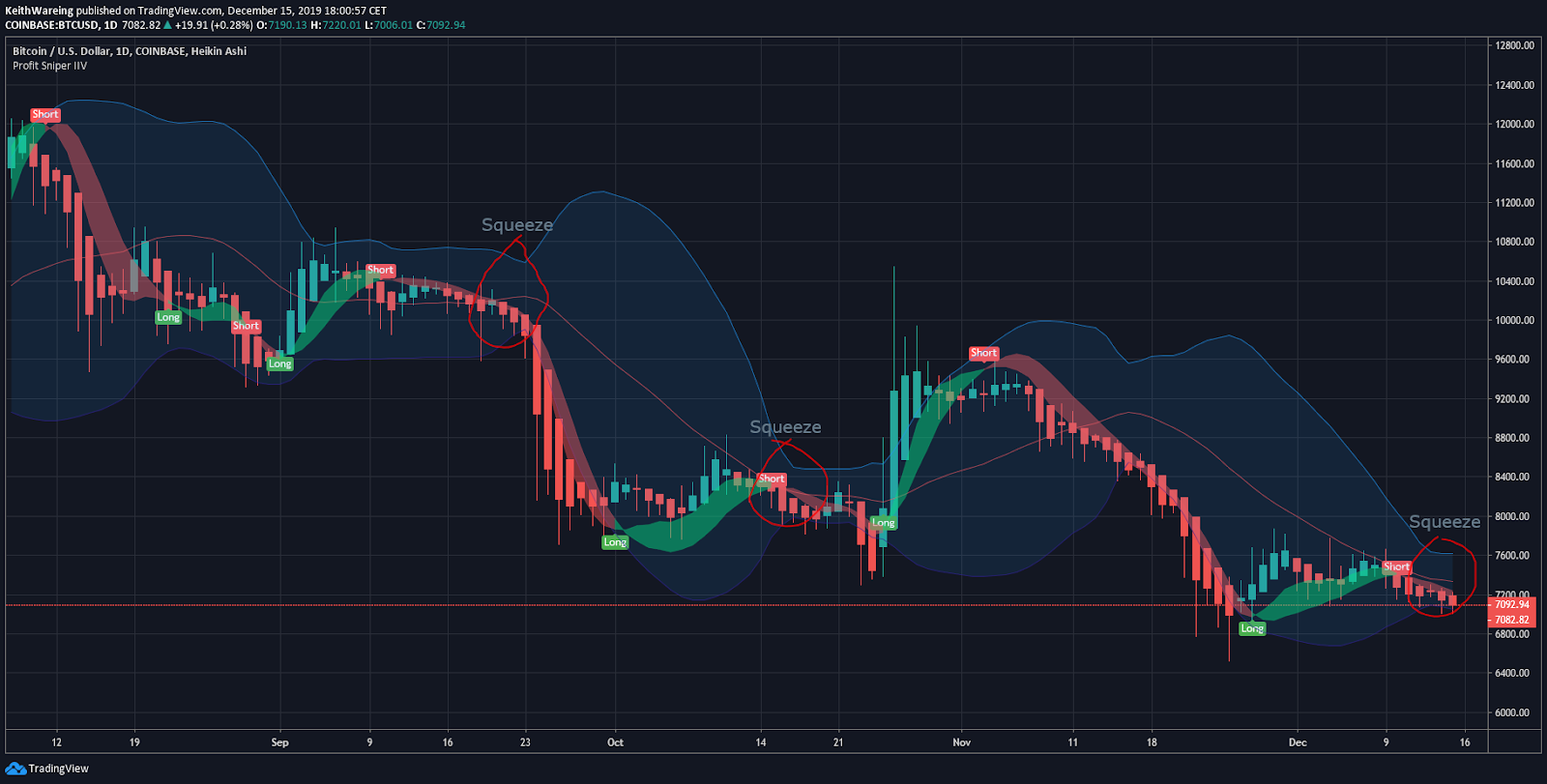 Genius in its simplicity, the bands automatically widen when volatility increases and contract when volatility decreases. For day traders, it’s an invaluable tool to have, as the moving average can have several purposes.

For example, if the price of an asset is sitting on the MA for a long period, which is typically when there is little to no volatility, the upper and lower bands begin to close in and “squeeze,” which results in a breakout.

When the bands are wide, it is typically a good time to trade, as you one can ride between the support and resistance. It’s almost predictable price action.

However, when the BB squeezes, it becomes difficult to establish which direction the breakout is going to occur, and this is what John Bollinger is alluding to. There’s going to be a big move, but which way?

The daily MACD is on the verge of a bearish cross 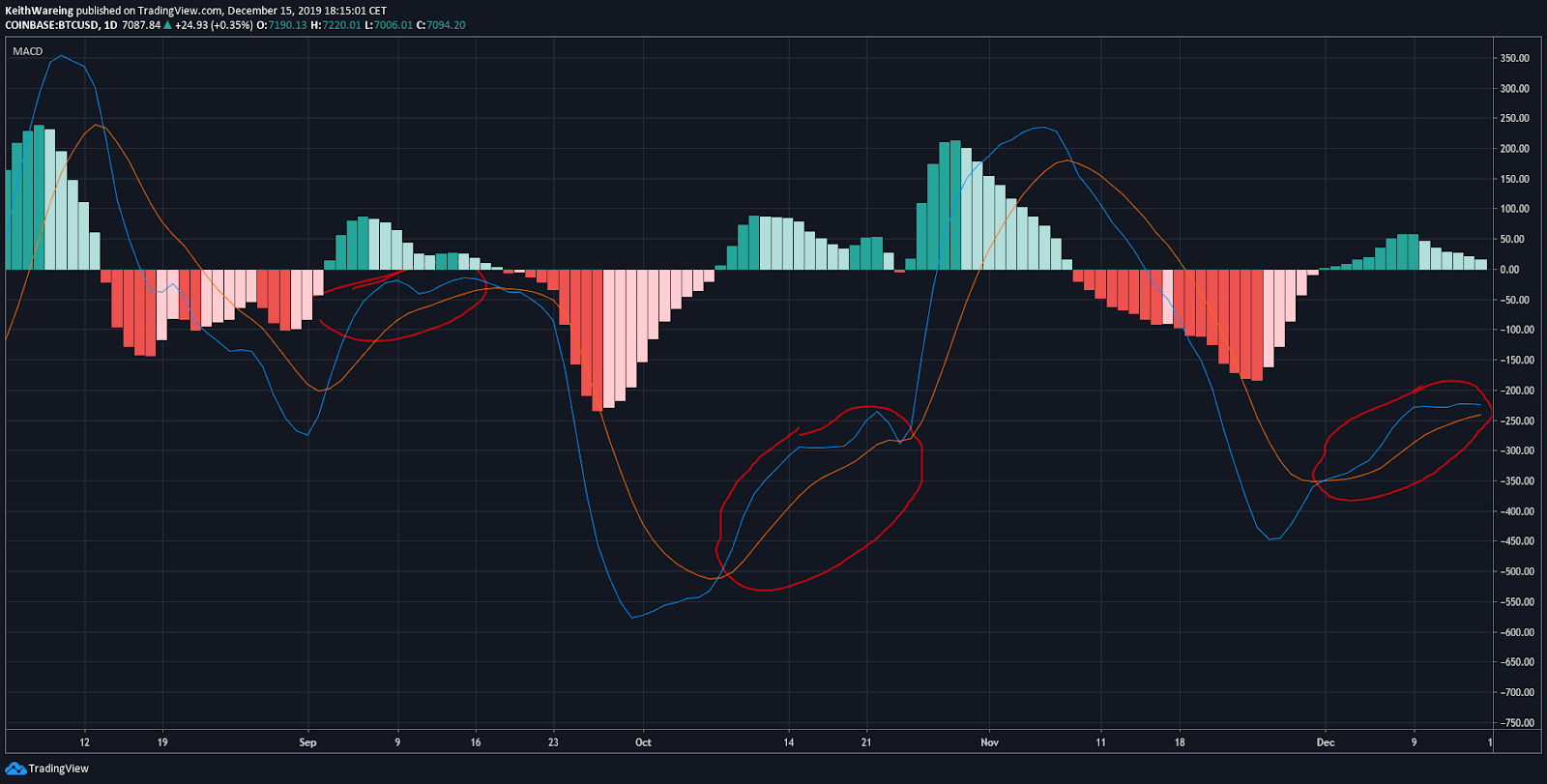 To gauge which direction a potential breakdown could occur, the moving average divergence convergence (MACD) can offer some clues. The pattern that we’re currently seeing can also be seen in September when the price broke down by around $3,000. However, it can also be seen in October, where the price unexpectedly jumped up by $3,000.

Both of these movements coincided with a Bollinger Band squeeze. But is it likely that the Bitcoin price will repeat the same move as it did in late October?

The monthly MACD is just as bearish 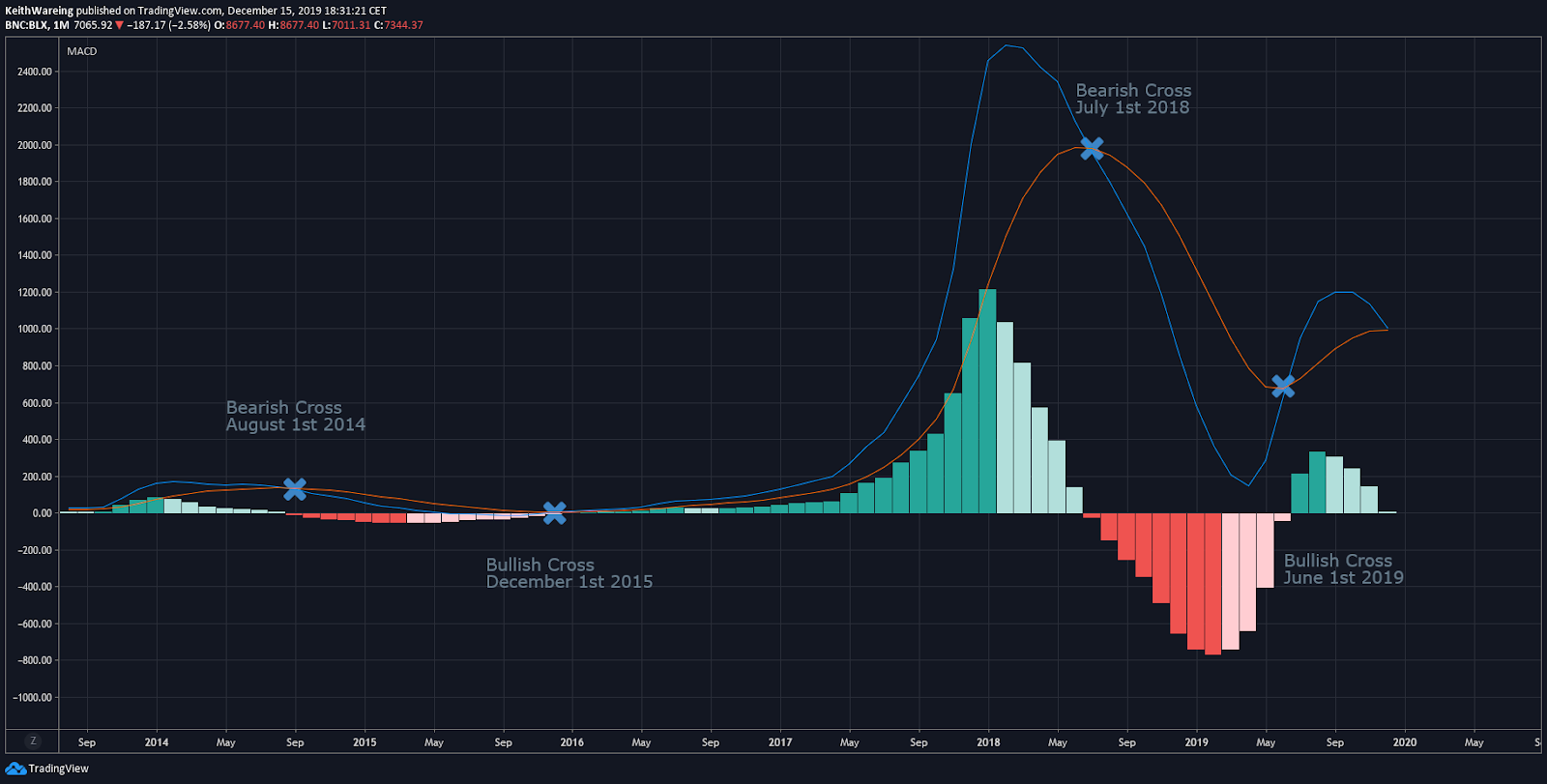 The monthly MACD rarely crosses. In fact, in the history of Bitcoin, it has seemingly only crossed 4 times. As 2019 draws to a close, it looks as if Bitcoin holders will endure a lot of pain.

The RSI provides some hope 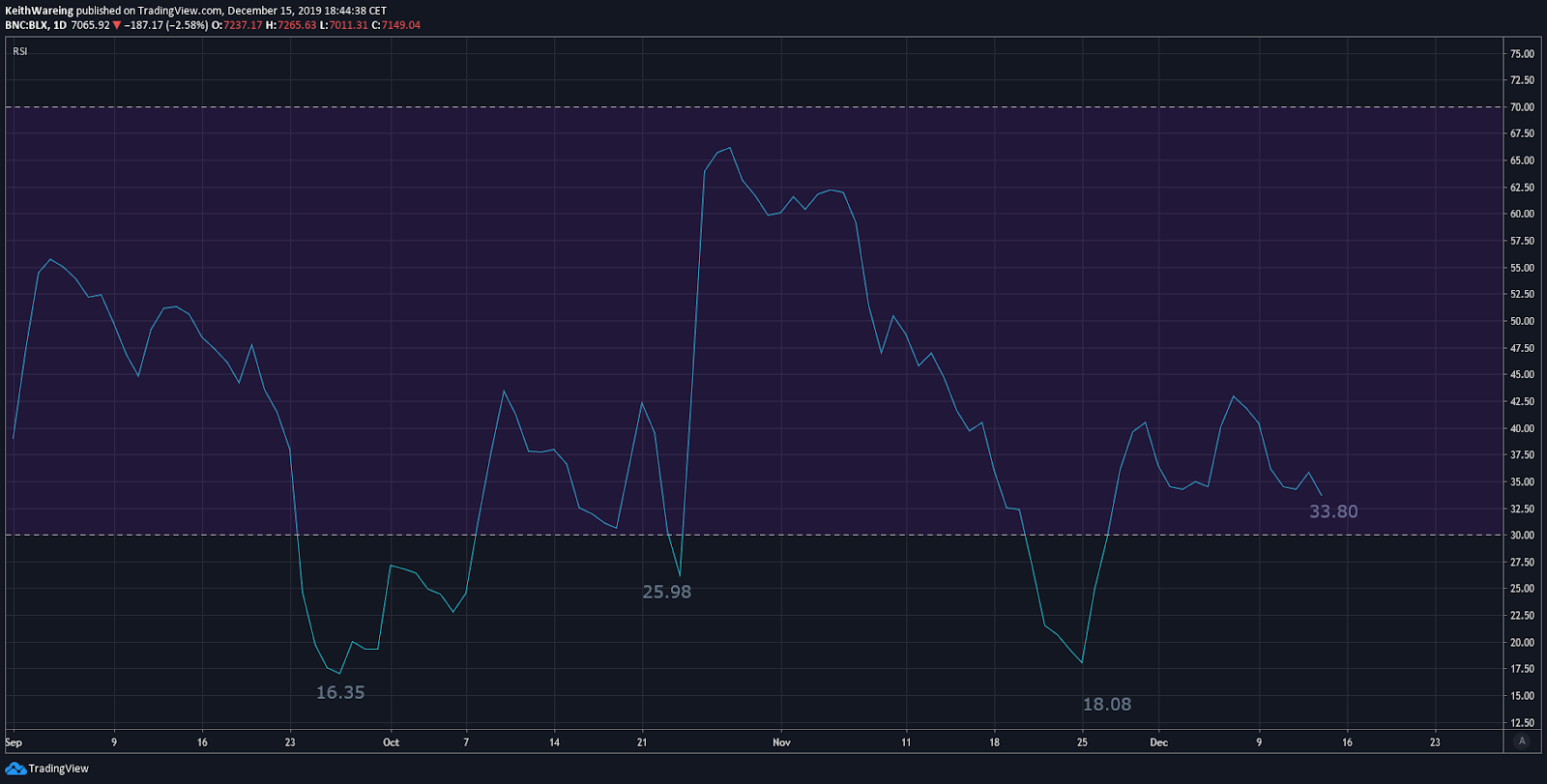 At the moment, the Relative Strength Index (RSI) indicator is not showing an oversold reading.

The daily RSI is currently around 33.80 and as can be seen in the image above, Bitcoin previously did not experience a reversal until somewhere between the mid-20s and mid-teens in recent months. 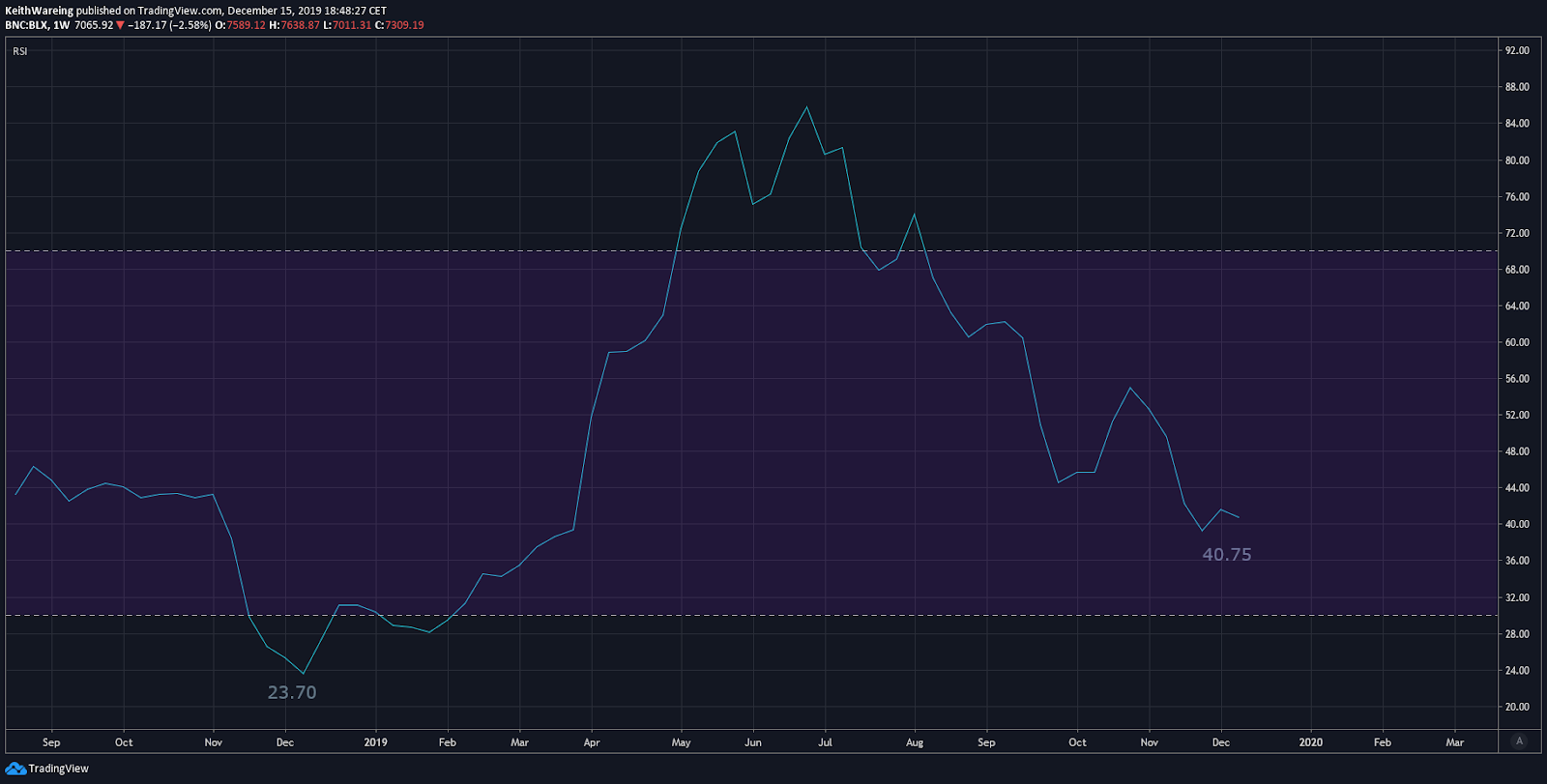 The weekly RSI isn’t much better either. As shown below, its current reading is around 40, whereas the last time it bounced the RSI was reading 23.70. 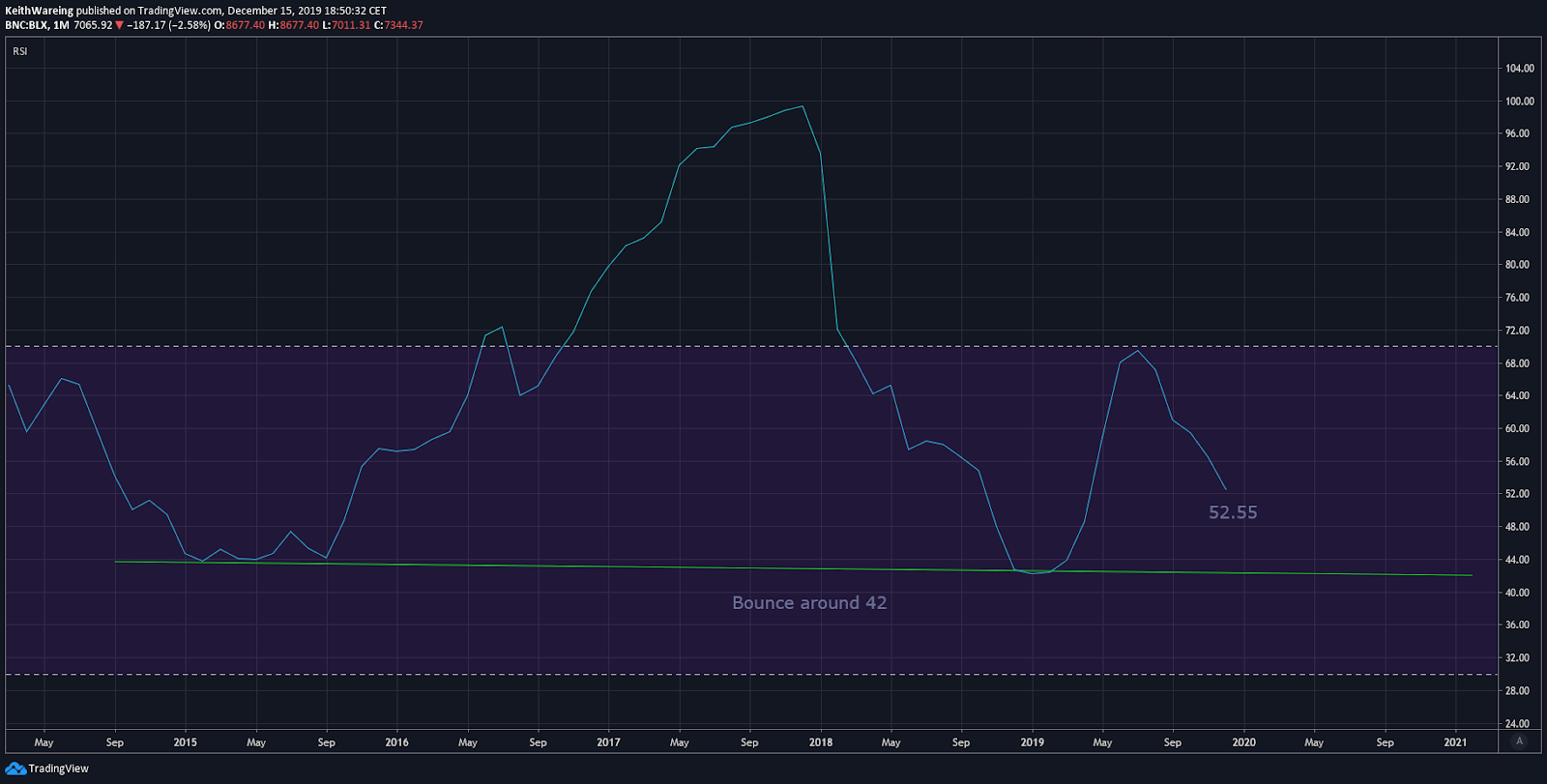 Lastly, the monthly RSI shows a reading around 52. But on the monthly chart, Bitcoin has always reversed around 42.

What all three of these RSI charts hint to is that Bitcoin is likely to fall further before experiencing a bullish reversal.

Until the historic levels have been breached, there is no clear buying signal to traders and any rally that happens between now and the end of the year is likely to be short-lived. 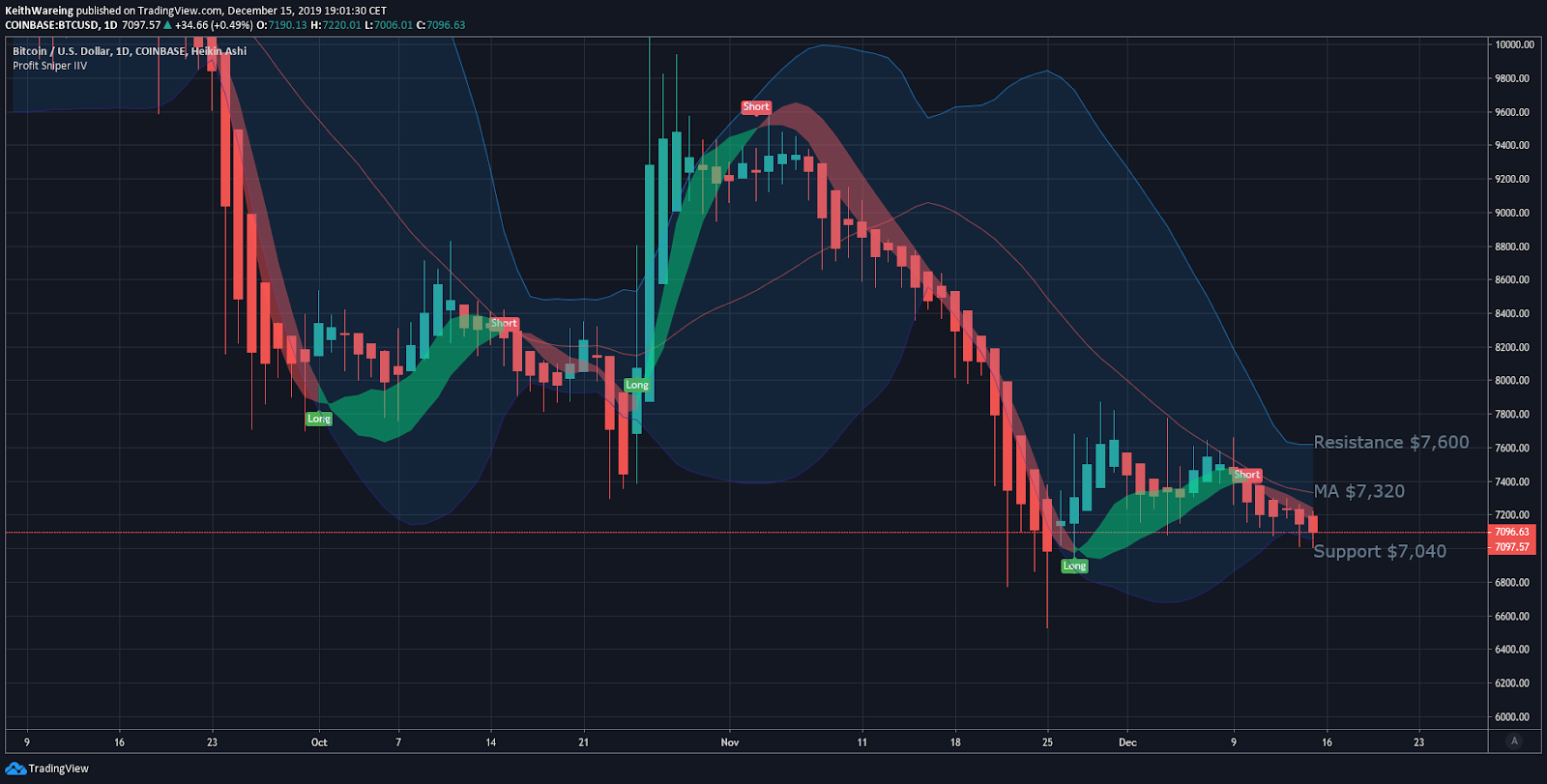 While I expect Bitcoin price to reach the CME gap, which closed at $7,265 last week, history suggests that it may reach this price and quickly retrace back to the support.

We’re most certainly in bear country and Bitcoin needs to hold $7,040 before opening up $6,900 as the last key support level until somewhere in the $5,000 region. However, the longer we stay sideways, the greater the opportunity for a bullish reversal as the lower Bollinger Bands will lift higher by the week across all longer timeframes.

As things stand, the downside could be as low as $2,800 over the coming months but the longer Bitcoin stays in a sideways channel, the higher this figure will become.

The views and opinions expressed here are solely those of the @officiallykeith and do not necessarily reflect the views of Cointelegraph. Every investment and trading move involves risk. You should conduct your own research when making a decision.