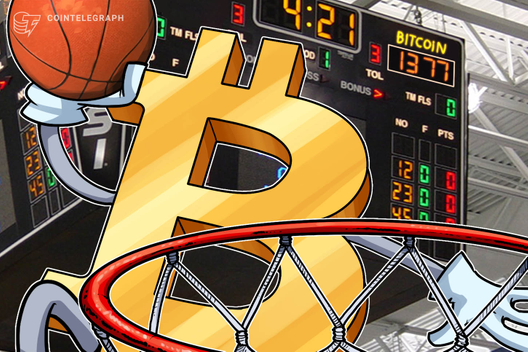 The Sacramento Kings — who spearheaded Bitcoin (BTC) payments for fan merchandise back in 2014 — have revealed some of the quirks in their history of cryptocurrency engagement.

“People from all over the world were buying Kings jerseys, tickets, different Kings gear. They were super excited that this team was accepting Bitcoin […] We even put a Bitcoin ATM in the arena. Then the Bitcoin price went up to $1,200 and they quit spending the Bitcoin.”

When the Kings first launched Bitcoin payments support, the coin was valued at $800 — ten times less than the current price.

Montoya remains positive, however. While Bitcoin’s eye-popping appreciation may make merchandise purchases with the coin less appealing, the Kings’ involvement in the cryptocurrency and blockchain sector remains extensive.

The team mines Bitcoin in its data center and this year announced a blockchain-based rewards program in partnership with Blockparty. “We have a very tech-savvy ownership group and innovation is a given; it’s part of our DNA,” Montoya said.

Season ticket holders, according to Montoya, continue to pay in Bitcoin and the Kings have their sights on an ambitious integration of blockchain across its ecosystem, believing it can reduce friction for fan engagement.

The team’s mining center was established largely for educational purposes, he said, with the center leading local workforce development efforts under the MiningForGood program:

“We utilize that [the center] to engage the community and teach the youth about STEM education and the importance of blockchain. Students of Sacramento should not be exposed to it 10 years from now, they should understand now that it’s a cool piece of technology and powering these things in the arena.”

The Kings have also ventured into crypto-collectibles via a partnership with CryptoKaiju and runs interactive scavenger hunts for its fans, offering them the chance to win Kaiju collectibles connected to sports fan privileges like courtside seats and VIP tours.

As reported, the Kings’ blockchain-based rewards program, which launched this October, was integrated into the team’s prediction game Call the Shot. Fans are able to earn blockchain tokens that have no monetary value and can only be redeemed for club-specific prizes.