Google, Facebook Take on Banking Duties, Crypto Shrugged to the Side?

Google, Facebook Take on Banking Duties, Crypto Shrugged to the Side? 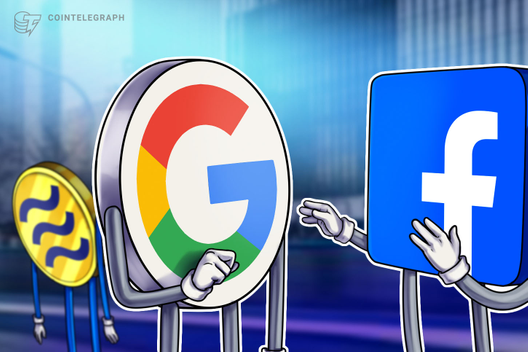 With major tech firms shifting their focus to finance, what does this mean for the future of crypto and the wider financial system?

A peculiar phenomenon is occurring within the economic sector. In fact, it’s been transpiring over the past few decades. After the rise of the internet and the development of effective communications, the financial industry underwent a technical reconstruction. Those formerly disbarred due to a lack of capital found refuge in this revolution. Internet brokers and e-commerce start-ups with little more than a “.com” suffix proliferated.

Some even threatened to subvert entrenched financial institutions. Among those attempting a banking coup was Confinity — now Paypal — one of the first online payment processors. Unbeknownst to most, financial disruption was the firm’s original intent. Speaking on a panel at the World Economic Forum in February, Paypal co-founder, Luke Nosek, recalled the company’s impetuous venture:

“The initial mission of PayPal was to create a global currency that was independent of interference by these, you know, corrupt cartels of banks and governments that were debasing their currencies.”

The disruption of the financial sector was always assured, and when it came, it left banks with two options: adapt or die. Ultimately, Paypal’s grand plan failed, and the firm became intrinsically linked to the institutions it hoped to oppose. Nevertheless, the disruption born in the 90s never really ceased.

History may not repeat, but it does rhyme, and this very phenomenon is recurring again today. Giving banks a veritable run for their money this time around is Bitcoin (BTC) and its novel underlying protocol, blockchain. In fact, the entire decentralized ecosystem is slowly but surely staging a financial insurrection.

But it isn’t just start-ups and disruptors looking to challenge the status quo of traditional banking. Behemoth tech firm Facebook is also leading the charge against the financial sector.

On Nov. 12, the relatively unanticipated Facebook Pay was launched. An announcement from the firm unveiled a cross-platform fiat-based payment system for Messenger, Instagram, and WhatsApp. The sudden reveal had a few scratching their heads.

For months, Facebook had been peddling its highly maligned cryptocurrency venture, Libra. Promising cheap, global remittances in an instant, the concept took some heavy flak from all sides.

Many within the cryptocurrency community shunned what they deemed a derivative attempt to solve something that Bitcoin already fixes, while regulatory authorities worldwide coalesced in opposition to what looked like an endeavor to undermine the financial system.

Libra’s early backers even left en masse in a quasi-revolt led by Visa and MasterCard. And yet, here is Facebook releasing a payment system, which, at first glance, seems eerily similar to the Libra initiative.

It looked as if the regulatory reverberations had finally taken their toll. Facebook had capitulated against pressure, deciding instead to deliver a tried-and-tested, bureaucracy free payments system like any other. Just as Paypal yielded from their philanthropic dreams of a people’s currency, has Facebook also thrown in the towel?

However, it may not be as cut-and-dry as that. Facebook notes that Facebook Pay — for now at least — will be localized within the United States’ jurisdiction only. This means that Libra still carries a valuable use case on a global scale. Moreover, the initial press release from Facebook alludes that Libra is still alive and well. Within the announcement, Deborah Liu, Facebook’s vice president of marketplace and commerce, relayed the distinction between the two ventures:

“Facebook Pay is built on existing financial infrastructure and partnerships, and is separate from the Calibra wallet which will run on the Libra network.”

So if Libra is still kicking, why the sudden transition to Facebook Pay? Was the hubbub around Libra simply a trojan horse for a more palatable foray into finance?

To answer this, Jonathan Kelfer, CEO of Velocity Markets, told Cointelgraph that it is unlikely that Libra was just a rouse:

“FB Pay is in line with existing services found outside the United States, such as AliPay. Clearly, Facebook sees a strong user value proposition for this means of payment and is looking to leverage it within their ecosystem. With FB Pay, users would inherently be restricted to their local currencies, lessening the potential for cross border payments and a more stable reserve. Conversely, Libra would act as a true global currency.”

Facebook isn’t the only tech giant looking to capitalize on the fintech revolution. Precisely one day after Facebook Pay was announced, it was reported that Google was planning its own banking enterprise.

According to the report, a partnership with Citigroup and the Stanford Federal Credit Union will see the search monolith offer checking accounts via the Google Pay app. Taking an example from Facebook’s newfound rhetoric, Google remarked that the initiative would foster the growing digital ecosystem.

Codenamed “Cache,” the so-called smart checking account is already being lauded as the “future of banking,” as well as the latest “Bitcoin killer.” Undoubtedly, with Facebook testing the realm of finance, Google felt the need to claim a stake of its own.

However, rather than fight a losing battle and compete with existing financial institutions, Google is aiming to get them onside — a tactic that will likely work in the company’s favor. The backlash Facebook suffered at the hands of global regulators was enough to make any tech firm looking to challenge the status quo think twice.

FAANG companies — the acronym coined for high-performing tech company stocks such as Facebook and Google — have enjoyed a thriving oligopoly within the industry for decades. Now, their collective eyes focusing on financial enterprises raises the question — why? Kelfer proposes that this may be an attempt to hoard a range of data they’ve not had access to:

“Big tech is in the business of collecting and distributing information. Given their large ecosystems, they are likely to want to see frictions reduced in any way possible, including transactions. The data that can be collected from spending habits would also be valuable.”

Intriguingly, tech-finance migration seems to be in line with a growing trend. A recent report from CoinShares revealed that social networks are fast becoming the new payment networks of choice. 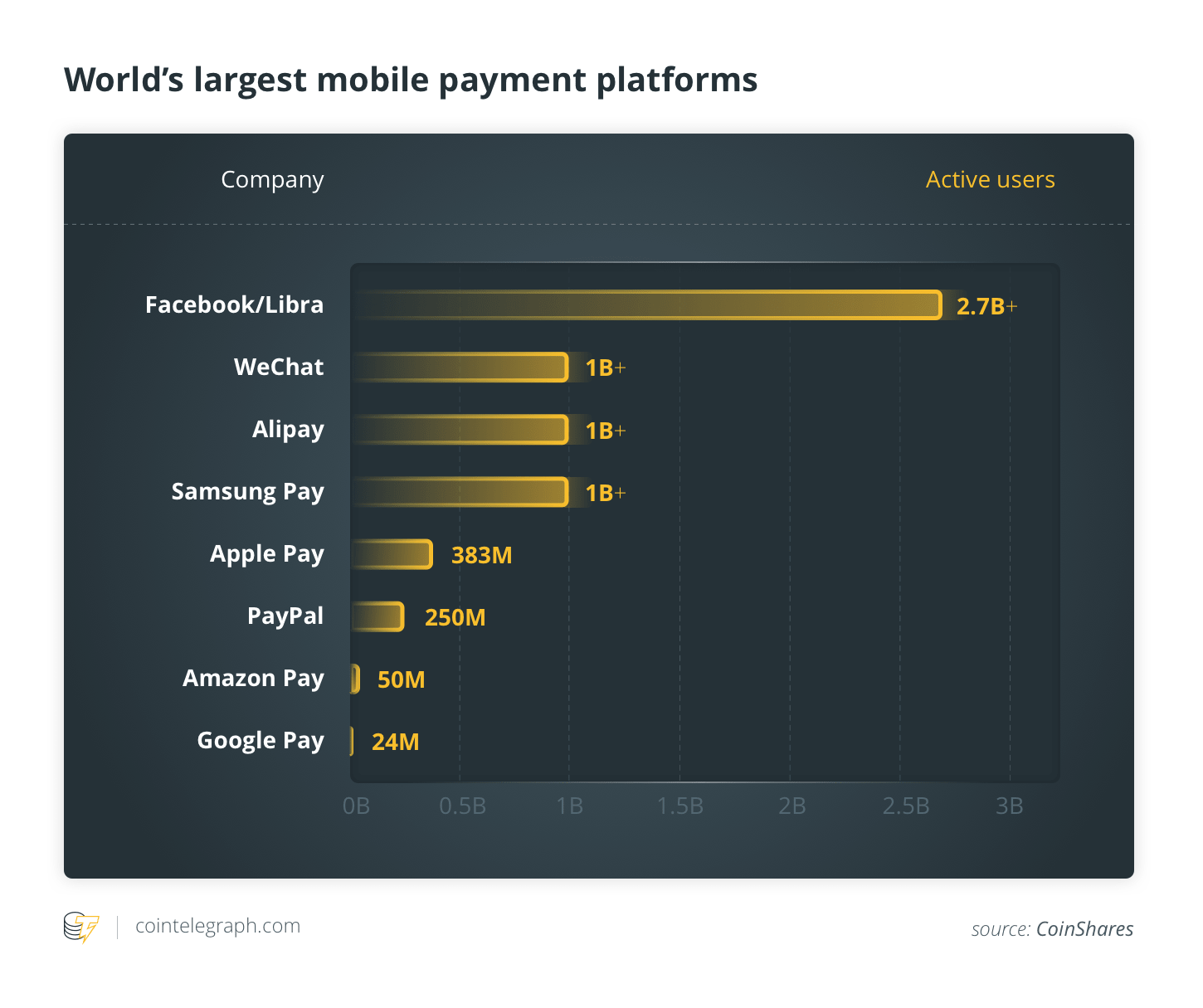 Mobile payment platforms such as Apple Pay, Google Pay, Amazon Pay and of course, Facebook’s own budding initiatives boast an inconceivable 6.4 billion active users between them. Moreover, nearly 40% of internet users prefer these modes of payment. Of these companies, only Facebook is truly harnessing the potential of digital payments and blockchain.

China’s incipient central bank digital currency, or CBDC, laid dormant from 2014 until early this year, its revival corresponded with Libra’s whitepaper. It’s been suggested that fears of capital flight via Facebook’s omnipresent currency led to a considerable increase in the CBDC’s pace of development.

Coincidentally, halfway across the world, the European Central Bank was similarly reviving plans for a financial overhaul. According to ECB board member Benoit Coeure, concerns that Libra would pose a risk to the financial sector provided a “wake-up call” for the bank.

With alarm bells ringing, a slumbering ECB project known as TIPS was awoken. Launched last year, TIPS, or a Target Instant Payment Settlement service, aimed to enable real-time payments within the Eurozone. For Coeure, however, this wasn’t enough — instead, he urged the ECB to roll out a CBDC of their own.

These examples are just the tip of the iceberg. According to a report from the Bank of international settlements, 70% of banks are either engaged in a CBDC or are about to start work on one.

With the threat of innovation knocking on their doors, the world’s banks are slowly taking things into their own hands. So why is Google sticking to the tried and tested methods of banking rather than harnessing digital payments and innovating further?

A former software engineer at Google himself, Kelfer suggested that it may be because banking isn’t within the remit of the tech giants, “True investment banking, underwriting, securitization, and many of the other hallmarks of Wall St would fall well outside the core competencies of big tech.” He also noted that even with Facebook’s attempt to go against the grain, it might not be too successful:

“Libra has a very low likelihood of becoming a ‘global reserve’ in that central banks already hold a basket of currencies and interest bearing instruments directly and manage these positions in accordance with their mandates and local economic conditions. Central banks need to retrain control over these allocations, which wouldn’t be possible with Libra.”

Arguably, there is a distinct prejudice when it comes to digital currencies. A prime example was as soon as Libra’s whitepaper launched, questions were raised about the currency’s anti-competitive nature.

The European Commission’s executive vice president for digital, Margrethe Vestager, even accused Facebook of attempting to create an isolated financial system. Ironically, that is the very basis of Bitcoin: a decentralized economic system free of intermediaries.

Much like Paypal’s inceptive goal, Bitcoin’s very purpose was to oppose the banking industry. Birthed from the aftermath of the 2008 financial crisis, Bitcoin’s defiant intent was coded into the genesis block by its creator, Satoshi Nakamoto.

So, while Facebook struggles to surmount the bureaucracy of building a new system and Google tries to update the existing one, for many, Bitcoin and the wider crypto industry already fix the issues that big tech is looking to innovate upon.

With major tech firms shifting their focus to finance, what does this mean for the future of crypto and the wider financial system?