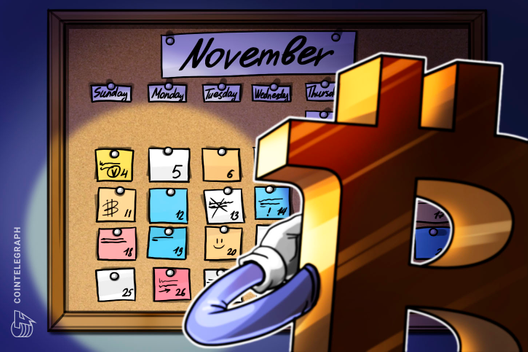 Altcoins have continued to boom while Bitcoin (BTC) has effectively traded sideways. I closed the majority of my position in VeChain (VET) for a quick 60% profit and nailed my exit on Stellar Lumens (XLM) almost exactly at the top. I am once again long on Bitcoin from $8,375 and have stopped out in profit from a position on Tron (TRX).

Update on the Bitcoin position

I entered a fresh Bitcoin trade at $8,595 on November 12th. I took this position because I viewed a return to the previous trading range below price as unlikely and because there was a clear area of liquidity as shown by the green box shown below. This made this area a likely place for a bounce.

Further, the price was showing a clear bullish divergence with the relative strength index on multiple time frames, and this area amounted to a 61.8% retracement, viewed by many as an ideal entry. All of this confluence made me confident in the position.

As the price moved up, I also moved my stop loss to break even. I exited manually today at even (with fees), seeing that price action was weak and assuming a drop was likely. Fortunately, I escaped moments before Bitcoin dropped to the mid $8,300s. After the drop, I filled the first of a number of bids for a new long position on the resistance to support flip pictured below. I am presently back in at $8,375. I will continue to update this trade as it develops.

TRX has been one of the most profitable assets that I have ever traded, as I caught much of the now-famous move from under .00000020 (sats) to .00002000 (sats). I am always looking for entries and became interested again when it dropped below .00000200 (sats) in August. A massive descending channel was clear on the chart, likely to eventually break to the upside.

TRX price formed a clear inverse head and shoulders pattern, so I took a small position on the breakout and local retest. I gave myself a comfortable stop loss, as the initial position was small so the risk of a larger percentage loss was minimized.

This is one of the benefits of entering a trade at numerous stages. My intention was to add to the position higher as I saw confirmation that a reversal was likely. As this happened, I trailed the stop loss up to below higher support levels. This went perfectly.

As mentioned in previous entries, this was effectively a second round of the same trade with the first retest of the .00000797 (sats) line on a larger time frame. I love taking long positions on the first major retest of a key resistance to support flip, so I was salivating for the opportunity to play this move.

Amazingly, the price wicked down to .00000782 (sats). My stop loss was sitting at .00000781 (sats), so I managed to stay in the trade by the thinnest of margins. Luckily, a more generous stop loss was justified, which is something I will consider on future trades. As you can see in the chart below, XLM price quickly made it to the target, piercing it with a wick and filling my asks. The price topped out at .00000942 (sats), only 2 sats above my sell orders. This elicited a quick 18% gain on the trade.

I entered a position in VeChain at .00000050 (sats) after seeing it break both descending and horizontal resistance. The trade is detailed in the most recent journal entry. I had already taken a profit last week at .00000062 (sats) for a 24% gain with half of my position, letting 50% ride for the higher targets. As illustrated in the chart below, the altcoin’s price continued it’s vertical ascent and hit my second target at .00000080 (sats), for a quick gain of 60% on 40% of the position. I have kept 10% of the position open for a shot at the higher targets. At present, the price has reached .00000093 (sats). This was a spectacular trade that went my way quickly and without much risk.

I remain in my position on Harmony (ONE). I also still hold positions in Dogecoin (DOGE) and Holo (HOT), which I will update when the price action details such an update as relevant.