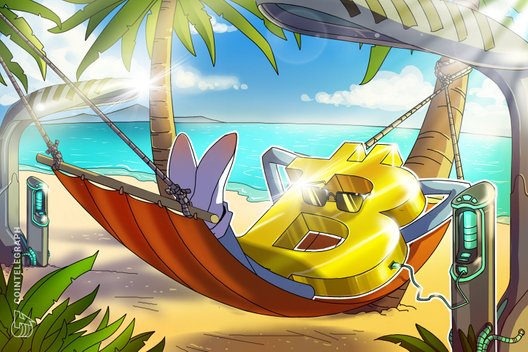 Data from Coin360 showed another lackluster day for BTC/USD, with little progress over the past 12 or 24 hours.

The week had begun with Bitcoin losing its foothold higher up, exiting a trading corridor between $9,000 and $9,500 and so far failing to reclaim it.

“Overall trend is down… Volume is still bearish. It’s certainly a look to hedge short play for me going into the close,” regular Cointelegraph contributor filbfilb told subscribers of his Telegram trading channel on Tuesday.

Fellow contributor Michaël van de Poppe had previously added that BTC/USD could dip to $8,400 if bullish signals remained evasive. As noted, that figure would be just $100 off the average price for Bitcoin this year, as predicted by the Stock-to-Flow model.

Nonetheless, traders could feel the fatigue on Wednesday, with the weekly performance showing a 6% loss, despite remaining 5% up overall versus the same time last month.

Van de Poppe had argued that such “ranging” price behavior in itself did not constitute a bearish sign.

On altcoin markets, meanwhile, some assets broke out of their sideways pattern to deliver noticeable moves.

Out of the top twenty cryptocurrencies by market cap, Neo (NEO) and Binance Coin (BNB) were the clear winners on the day, achieving gains of 13.1% and 6.55% respectively.

NEO was building on the upward momentum which had characterized the token in recent days.

The overall cryptocurrency market cap stood at $241.3 billion at press time, with Bitcoin’s share at 65.9%.