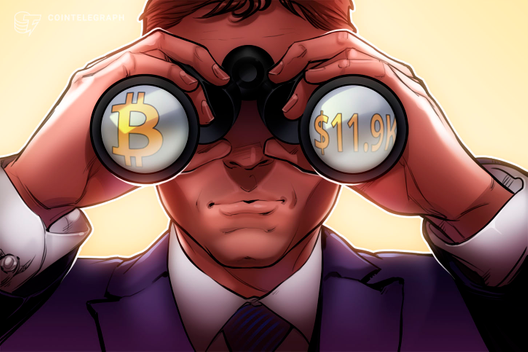 Crypto traders fully understand that there is never a boring day in the sector and the month of November started with a handful of tantalizing news stories. On Nov. 4, Bloomberg reported that two university researchers concluded that the entire 2017 Bitcoin rally to $20,000 was driven by one solitary whale.

The next day the Stellar Development Foundation announced that it had destroyed 55 billion ($4.7 billion) (XLM) tokens in a move designed to make the ecosystem more efficient.

On Nov.3 Huobi Global also announced that it would freeze the accounts of all United States-based customers starting on Nov.13. The exchange operator explained that its user agreement explicitly prohibits U.S.-based customers from using its trading platform.

Until Nov. 13, customers can receive refunds in Bitcoin (BTC) or Tether (USDT) and clients who used margin traded have been told to return the funds borrowed and withdraw all remaining digital assets from their accounts.

All of this has taken place over the past few days, before the first week of November has even ended! Meanwhile, Bitcoin continues to move higher, pushed steadily by bulls and seemingly unaware of the numerous attention-grabbing headlines rocking the crypto world right now.

On the daily timeframe the relative strength index (RSI), moving average convergence divergence (MACD) and Stochastic RSI are all bullish but the weekly and monthly timeframes are even more encouraging. 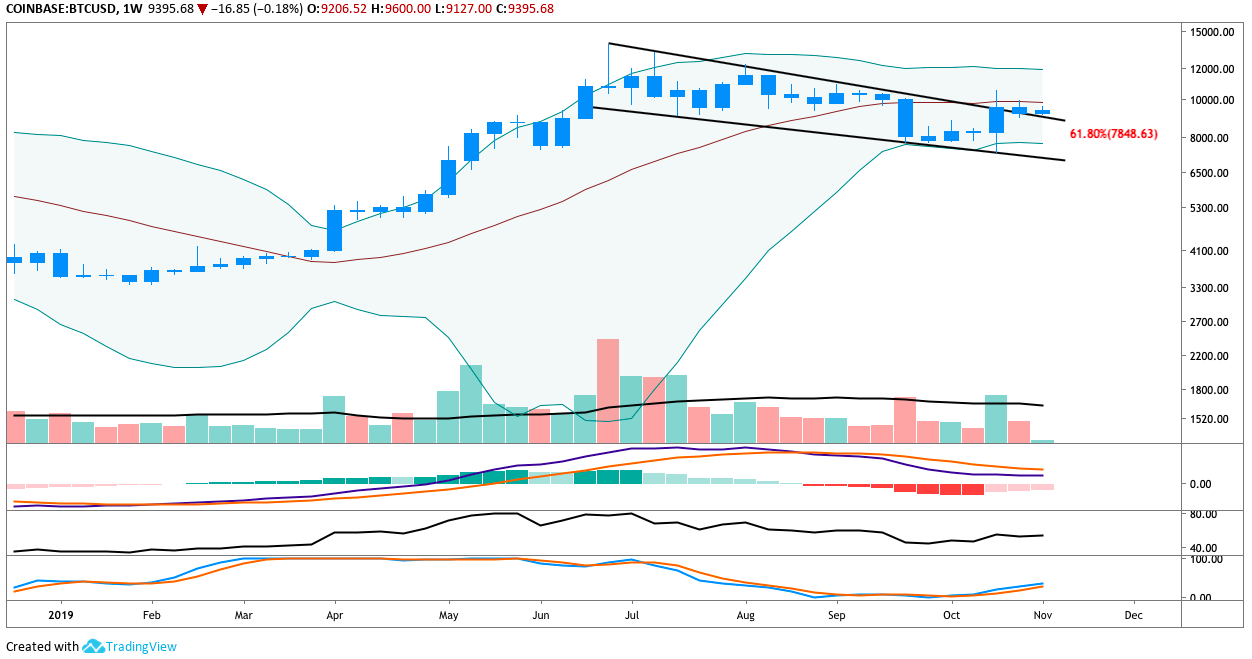 Bitcoin closed the month trading outside of the descending channel and the price is steadily pushing higher towards the 20-week moving average (WMA) which currently resides at $9,800. The Bollinger Bands indicator shows that above the 20-WMA, Bitcoin price could extend to $11,890, whereas a strong downside break could push prices as low as $7,768.

The weekly MACD shows a steady abatement in selling pressure as the histogram has flipped from red to pink over the past 3 weeks and the length of each bar has shortened. The MACD line has eased its decline and flattened, suggesting a steady move up toward the signal line but closer analysis of the daily and 6-hour MACD is required.

Both the weekly and daily time frames show Bitcoin notching successive higher lows and the price is well supported by the 200-daily moving average (DMA). 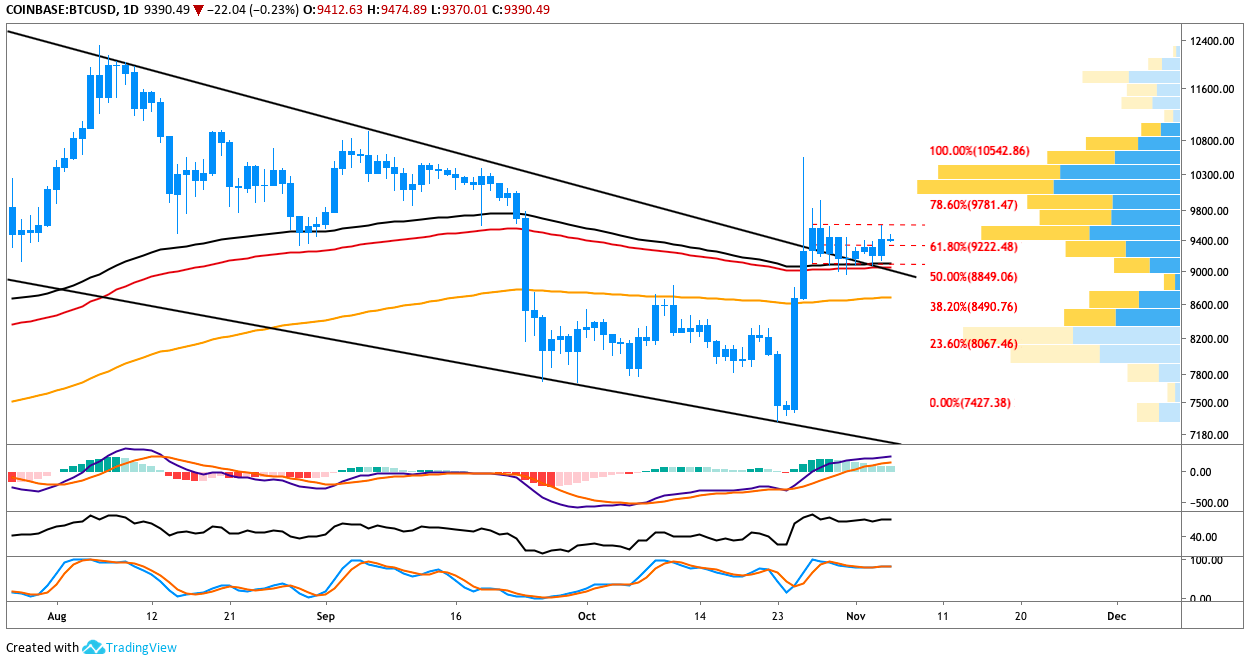 The 42% rally on Oct. 25 also shifted the course of the 111 and 128 DMA and the moving averages are beginning to put some distance between each other. The dreaded “death cross” between the 50 and 100-DMA has also been avoided for now.

Bitcoin needs to gain above $9,575 or bears could set up shop and press the price to the 20-DMA and 200-DMA which are aligned at $8,722. As shown by the volume profile visible range, $9,500 remains a stiff resistance but selling pressure begins to dissipate above this point. 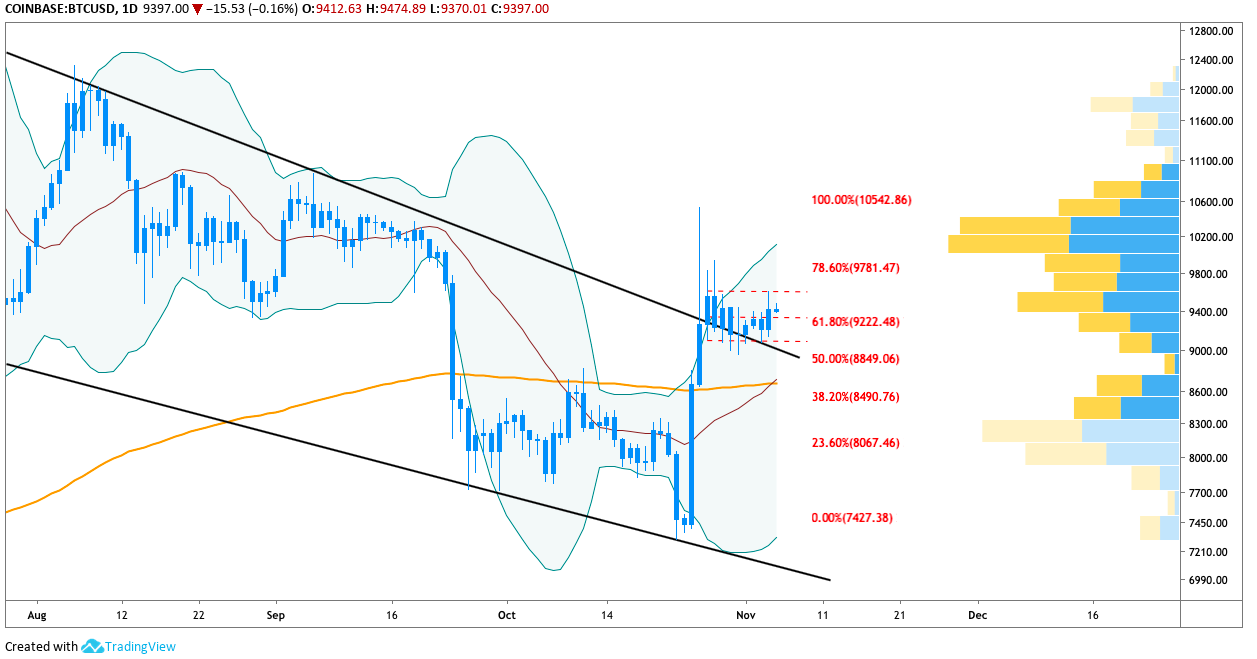 Traders will also note that on the daily timeframe the upper arm of the Bollinger Band indicator is at $10,106, so momentum traders who opened positions at $9,000 could begin to take a percentage of profits at $10,110, then adjust trailing stops in case a high volume breakout or short squeeze pushes Bitcoin price back toward $10,500.

The 6-hour chart shows that Bitcoin’s current short-term set up remains bullish and more upside action could be in store. Monday’s move to $9,600 brought Bitcoin’s price above the 12 and 26-period exponential moving averages (EMA).

The 6-hour MACD shows a bullish cross taking place but the signal line and MACD have flattened as the price drops back toward the middle arm of the Bollinger Band indicator. The 6-hour Stoch has also formed a double top at 99 and, at the time of writing, it is pulling back to 87. 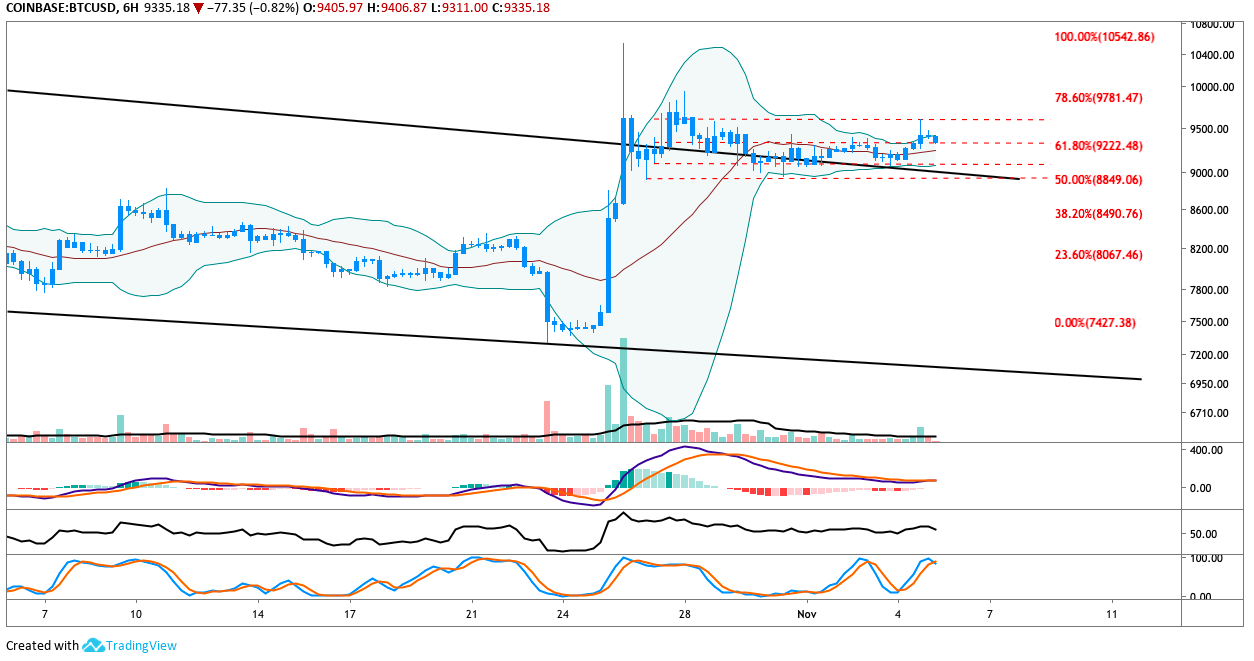 As frequently noted in previous analysis, outside of today’s earlier breakout, trading volume continues to taper off and the Bollinger bands continue to tighten.

The price has pulled back from the upper band and has now dropped to support at the  20-MA around $9,247 as the price range tightens. It’s possible that Bitcoin price could drop to the bottom Bollinger Band arm at $9,080, which is also a frequently tested support. 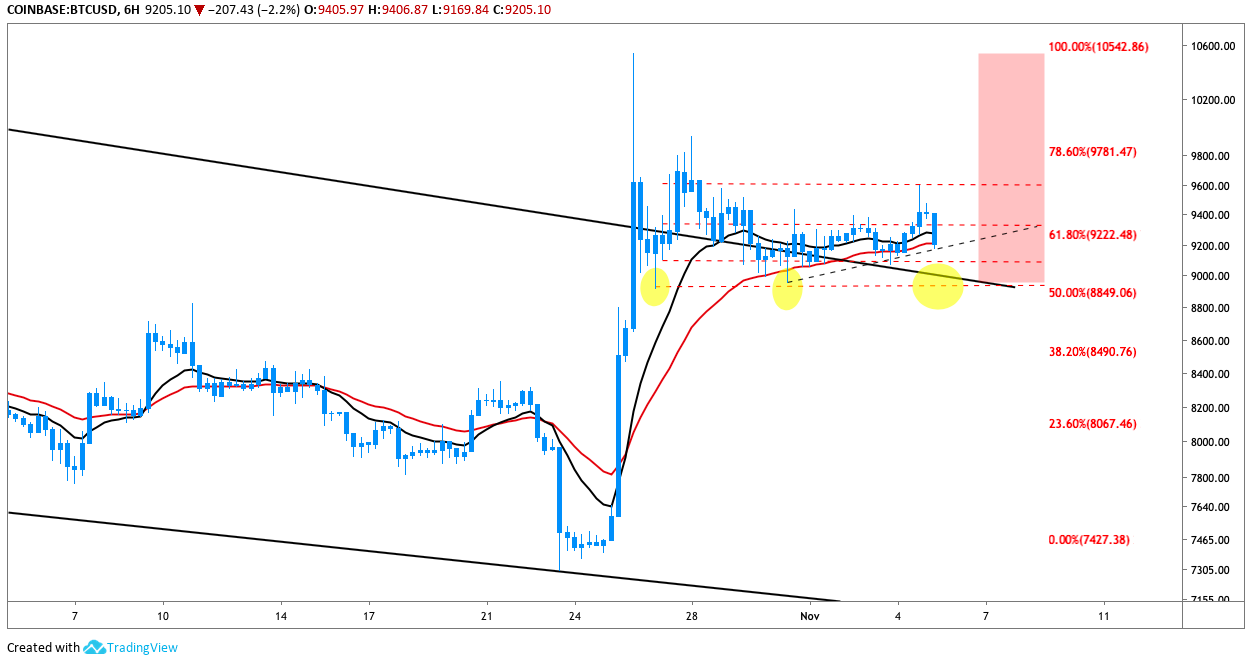 Short-term price action aside, Bitcoin’s setups on the monthly, weekly and daily time frame are exciting with a clear bull flag in sight.

Notably, the fact that the digital asset has managed to pop outside of the multi-month descending channel is encouraging and the continuity of higher lows and increasingly bullish indicators across the longer timeframes suggests that a trend change is in order; and traders only need to patiently wait to see if Bitcoin makes another run at $11,500 over the coming weeks.