The WEF’s new blockchain initiative aims to establish efficiency and transparency within the metals and mining industry — so what are the chances?

Specifically, the “Mining and Metals Blockchain Initiative” will include building an inclusive blockchain platform, which will ostensibly help to increase “transparency, efficiency or improve reporting of carbon emissions” across the industry. So, is blockchain a truly good fit for mined resources?

Blockchain in the mining industry: from theory to practice

The WEF’s blockchain initiative announcement seems well-calculated, given that the organization has focused on the technology in its reports over the past few years. First, in April 2018, the WEF published the “Blockchain Beyond the Hype” paper, stressing that blockchain deployment should not be a goal in and of itself.

A few months after, the organization highlighted blockchain’s significance to the mining and metals industry in particular, citing less paperwork, faster transactions, compliance and sustainability among primary reasons.

In July this year, the WEF issued The Blockchain Value Framework guide, which was a more concrete framework for “those business leaders that have figured out blockchain is the right solution for a specific problem, but don’t know what to do next,” as explained at the time by Sheila Warren, Head of Blockchain at the World Economic Forum. Namely, the document listed six recommendations for companies, prompting them to take time to understand the technology, set realistic expectations, and align to strategic priorities.

So what exactly makes blockchain the right fit for mining? The industry largely revolves around extracting objects and transporting them from point A to point B, so providing accurate supply chain data could be an option. Nathan Williams, CEO at Minespider, a blockchain protocol for responsible mineral sourcing, told Cointelegraph:

“Supply chain data is very sensitive, and before blockchain there was no solution that could enable traceability without companies sacrificing their sensitive supply chain data. The only real alternative to using blockchain right now is to be content with not knowing the origins of our products.”

For tracking products, the industry currently relies mostly on automated databases and physical paperwork, adds Richard Verkley, CEO at Karuschain, the company behind a blockchain tracing and tracking solution for the precious metals industry. The distributed ledger technology allows for much better data management, Verkley explained to Cointelegraph:

“Where current alternatives fail is they have an inability to reject data manipulation as quickly or totally like a blockchain consensus mechanism. Blockchain systems can ensure that the source of the precious metal can be traced without manipulation.”

In other words, an immutable ledger provides access to the full account of the history of a particular mineral and eliminates the possibility of document forgery by all possible stakeholders, including financial institutions, ship operators, surveying laboratories and warehouses.

Ultimately, blockchain helps to solve two major issues for the metals and mining industry: traceability and consistent verification throughout the entire supply chain, as explains Dr. Nicholas Garrett, CEO of advisory firm RCS Global Group. Responsible sourcing could be achieved when both factors are taken into consideration, he explained to Cointelegraph:

“Blockchain alone only helps to solve the first challenge and there is little value in traceability alone outside of supplier management efficiencies. Only when combining blockchain technology with assurance mechanisms solving the second challenge becomes the use of blockchain really interesting from a responsible sourcing perspective.”

Tracking the origins of mined resources can also be important for ethical reasons. Everledger, a global digital registry for diamonds powered by the IBM Blockchain Platform, was created specifically to tackle the “blood diamonds” issue — i.e., preventing the circulation of diamonds mined in war zones and sold to oppressive regimes.

The demand is there, too: Hong Kong-based jewelry retailer Chow Tai Fook, one of the world’s largest jewelry companies, with total assets at around $8 billion, and one of the companies who have joined Everledger.

The WEF-backed initiative takes the idea of using blockchain for the above mentioned purposes and puts it on a larger, industry-wide scale. As per the press release, the organization, along with seven partners — Antofagasta Minerals, the Eurasian Resources Group, Glencore International AG, Klöckner & Co., Tata Steel Ltd. and Tracr (AngloAmerican and De Beers) — plan to pool their resources to jointly experiment with, design, and deploy shared proof-of-concept (PoC) as part of an inclusive blockchain platform.

Three of these firms are among the top-10 largest metals and mining companies in the world, which means that a substantial proportion of the market will work on using blockchain solutions.

Specifically, the initiative aims to help the industry by increasing transparency and efficiency of its day-to-day operations and improve the reporting of carbon emissions. Members will look to examine governance-related issues, develop case studies, and establish a working group. The press release reads:

“In many cases, blockchain projects to support responsible sourcing have been bilateral. The result has been a fractured system that leaves behind parts of the ecosystem and lacks interoperability.”

One of the most evident examples of such bilateral collaborations is Tracr, a blockchain platform initially created by industry giant De Beers. In October 2018, Russia’s Alrosa — the world’s largest diamond mining firm — joined the pilot in a bid to improve operational transparency and consumer trust across the diamond value chain from mine to retail. As Alrosa CEO Sergey Ivanov said at the time, the company’s move was motivated by a belief that industry collaboration is essential for the sake of “a common goal.”

Likewise, the new WEF-backed system will ostensibly work to “improve industry-wide trust that cannot be achieved by acting individually.” Nevertheless, similar consortiums already exist in the metals and mining industry. For instance, IBM has partnered with MineHub Technologies to develop a blockchain solution that will improve supply chain management.

At this point, it boasts a number of high-profile clients like Volkswagen, who joined the blockchain-powered scheme to ensure the cobalt used in lithium-ion batteries for its electric vehicles is responsibly sourced.

There is also “Forcefield,” a blockchain-powered metal traders consortium backed by the London Metal Exchange (LME), financial services giant ING, and “Open Mineral” — another consortium of mining companies and financial organizations who are developing a blockchain-based mineral trading system.

The initiative’s future: no concrete details yet, members are optimistic

So what are the chances of success for the Mining and Metals Blockchain Initiative? Notably, unlike the above mentioned examples, the program mentions that international regulators and NGOs are also expected to provide input, suggesting an overall wider scope of operation.

When asked whether the new responsible sourcing program could actually help to increase transparency and efficiency across the industry, Dr. Paul Sin, a consulting partner with Deloitte’s Asia Pacific Blockchain Lab, replied positively in a statement to Cointelegraph:

“DLT is a B2B data synchronization platform, and it allows all ecosystem participants such as miner, logistics, distributers, regulators, etc. to exchange information near real-time, on a trusted data platform with an immutable audit trail.”

However, other experts warn that the initiative will not necessarily become the universal model for industry participants, no matter how efficient it might look on paper — at least not in the near future.

“This largely depends on the governance structure and the ultimate ends of the blockchain initiative.”

Dr. Garrett replied in an email to Cointelegraph when asked whether the initiative is likely to achieve the set goals. “It will take time for industry to embrace total transparency which can be quite disruptive,” Verkley added.

The program’s members, in turn, seem much more positive about the future. “By working together, our goal is to develop solutions that can be adopted across the industry and value chain,” said Benedikt Sobotka, CEO of Eurasian Resources Group.

“This blockchain consortium — with collaboration between forwarding thinking companies, and regulators, NGOs and technology providers — with blockchain and distributed ledger technology has a great potential for industry adoption and value creation.”

Meanwhile, no roadmap has been released so far, which makes it difficult to evaluate the initiative’s future. The WEF has yet to provide an additional comment for Cointelegraph. 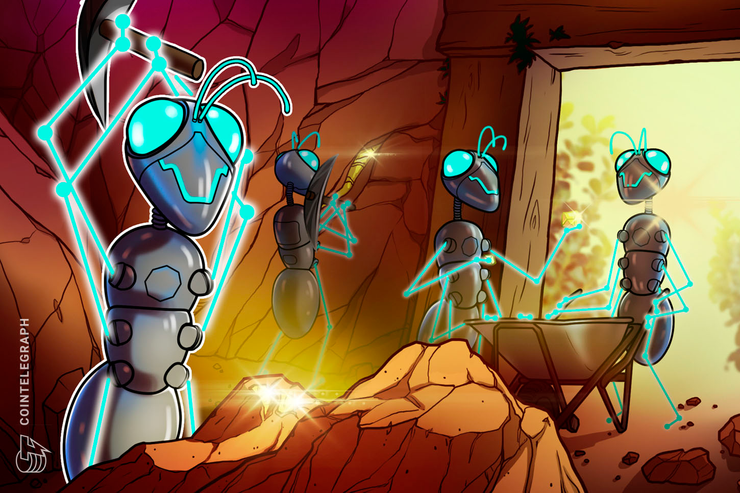 The WEF’s new blockchain initiative aims to establish efficiency and transparency within the metals and mining industry — so what are the chances?