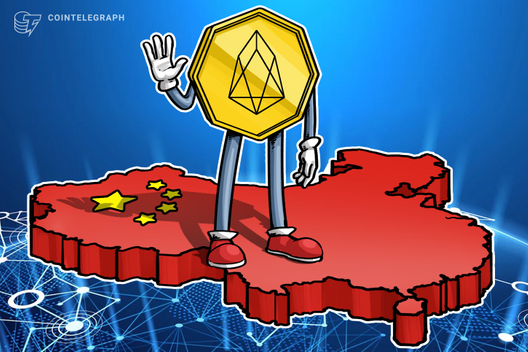 China’s state-backed tech workgroup has released its fourteenth crypto rankings report, with Bitcoin (BTC) ranked 11th and EOS (EOS) retaining the top spot as of the end of September 2019.

The listings rank 35 assets in total, as reported on Sep. 29 by the Center for Information and Industry Development (CCID)’s online information portal.

Compared with the last instalment of the rankings this July, Bitcoin has held its position while altcoin Tron has dislodged Ether (ETH) from the second spot. XRP is up from 30th to 20th-ranked asset.

Under the aegis of China’s Ministry of Industry and Information Technology, CCID first launched its monthly crypto ratings report back in May 2018, and awarded Ether the top position out of the original 28 coins.

The assets are evaluated according to three parameters: basic technology, application and innovation.

Tron — first included in CCID’s rankings this February — has today reported gains of as high as 25% against the U.S. dollar, perhaps following CEO Justin Sun’s announcement of a major, as yet undisclosed, partnership with an alleged “mega corporation.”

That same day, China’s President Xi Jinping called for the accelerated national adoption of blockchain technology in an official speech.

President Xi’s intervention and positive signs from the People’s Bank of China have this week sparked a major uptick in the domestic blockchain sector — spurring the stock markets and fervent interest among the public.