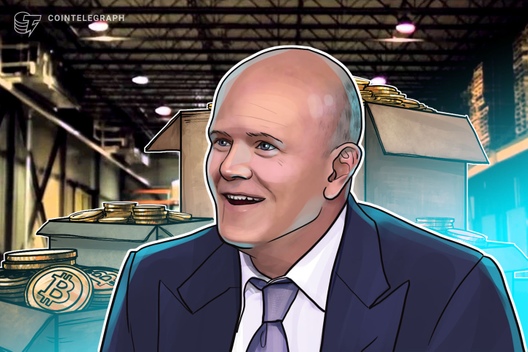 Michael Novogratz hinted that Galaxy Digital will be launching a new Bitcoin fund, possibly in November

Michael Novogratz, Galaxy Digital CEO and chairman, spoke to CNBC’s Squawk Box where he said that a new Bitcoin (BTC) fund was in the works.

On Oct. 24, Novogratz hinted that Galaxy Digital Asset Management has plans to launch a new Bitcoin fund to allow people easy access to the world’s most popular cryptocurrency. He told Squawk Box hosts that Galaxy “will have a fund in time.” Novogratz said:

“It is just a Bitcoin fund that takes care of custody, takes care of pricing […] it just allows people to invest in Bitcoin without having to set up a Coinbase account, without worrying that their phone is going to get lost.”

In the interview, Novogratz remained positive on the future of Bitcoin, but also said that it needs “new energy to really make the big move.” He continued to appraise BTC’s price movements:

The Goldman Sachs of cryptocurrencies

Galaxy Digital gained approval from the Financial Industry Regulatory Authority at the beginning of September to underwrite registered public offerings of securities as the cryptocurrency investment company has its sights on facilitating security token offerings.

Novogratz, who is a former partner at Goldman Sachs and who wants his firm Galaxy Digital to fulfill a similar role in the crypto industry, said that he sees underwriting securities offerings as a good add-on to Galaxy’s existing services. Novogratz added:

“It’s a really young industry, and we are a pretty young business. We are sober and patient about how fast it will grow, and we are well capitalized. This feels like a perfect addition.” Michael Novogratz hinted that Galaxy Digital will be launching a new Bitcoin fund, possibly in November