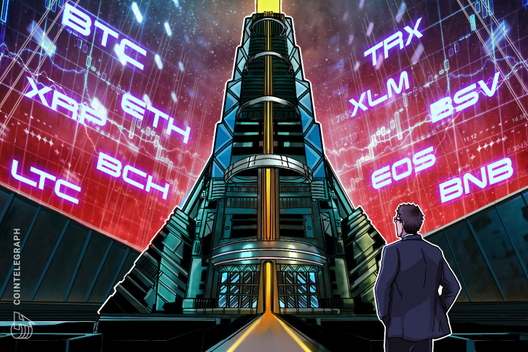 Bitcoin’s (BTC) plunged today, dragging the whole crypto space along with it. The total crypto market capitalization has broken below the $209 billion mark from where it had bounced on two previous occasions in late September. It has psychological support at $200 billion and below this point the total market capitalization could drop to $170 billion.

At the moment, there is not a direct reason that explains today’s strong correction. Some analysts believe that Facebook CEO Mark Zuckerberg’s testimony before the United States Congress on Libra might have triggered the fall. They believe that the stiff opposition to Libra shows that Bitcoin and other cryptocurrencies will not be able to mainstream easily.

While there is no clear reason on the fundamental front, the technical picture was pointing to a large breakout or a breakdown because Bitcoin had been stuck in a tight range for the past few days. We were expecting a breakout to the upside but the markets had other plans. Once the support at $7,702.87 cracked, it would have triggered several stop losses resulting in a long liquidation, which extended the fall.

During the current decline, most major cryptocurrencies have either broken down from their support levels or are very close to them. While a breakdown is a significant event, we will watch whether the bears are able to sustain the lower levels or if the price snaps right back quickly.

If the price can quickly reverse direction and swiftly climb higher, it will indicate that the current fall was a bear trap – a last shake out before a new rally begins. Hence, the next three days are critical as it will provide us an insight on what to expect.

Let’s analyze the cryptocurrencies and determine whether the critical support levels have broken down or not.

Bitcoin’s price action has repeated a similar pattern that it followed in late September. After failing to cross above the 20-day exponential moving average (EMA), the price plunged. The cryptocurrency has broken down of the immediate support at $7,702.87, thus triggering our stop loss for the aggressive traders.

However, if the bulls defend the support at $7,337.78 and quickly push the price back above $7,702.87, it will indicate demand at lower levels. This move, coupled with the bullish divergence on the RSI might indicate that the current fall is a bear trap to scare the weak hands before reversing direction.

The failure of the bulls to push Ether (ETH) above the 20-day EMA in the past few days has attracted selling. It has broken down from the immediate support at $161.056. This move triggered our suggested stop loss at $160 which was the point suggested for aggressive traders.

The next support on the downside is $151.829. If this support also cracks, the ETH/USD pair could resume its downtrend towards $122.

However, we have not turned completely bearish yet as the bullish divergence on the RSI is still intact. If the bulls buy this dip and quickly push the price back above the downtrend line, it will indicate that the current fall was a bear trap. Therefore, we will closely watch the price action for signs of a reversal and suggest a trade if we spot one.

The bulls again failed to keep XRP above $0.29227, which shows that bears are selling aggressively close to $0.30368 levels. The price dipped below both moving averages and fell close to the support at $0.24508 where some buying emerged.

Bitcoin Cash (BCH) is consolidating in a downtrend. The bulls failed to push the price above the $241.85 to $203.36 range in the past two days. This shows a lack of demand at higher levels.

If the bears can sustain the price below the support at $203.36, the downtrend will resume. In such a case, a drop to the next support at $166.98 is possible.

Alternatively, if the bulls buy the dip to $203.36, the BCH/USD pair will extend its stay inside the range for a few more days. The first signs of a turnaround will be when the bulls push the price above the overhead resistance of $241.85 and the 50-day SMA. Until then, we suggest traders remain on the sidelines.

The consolidation in Litecoin (LTC) has resolved to the downside. This is a negative sign as the downtrend has resumed. If the price sustains below $50, the next support on the downside is $40.

If the bulls buy the current dip and push the price above $50 quickly, the LTC/USD pair will extend its range-bound action for a few more days. The first sign of strength will be if the bulls can propel the price above the 50-day SMA. As the pair has been in a long-term downtrend, we will wait for the price to form a reversal pattern before proposing a trade in it.

EOS has been consolidating in a downtrend. For about a month, the price has been stuck inside a tight range. The failure of the bulls to propel the price above both moving averages shows a lack of urgency among buyers. This shows that traders are not confident that a bottom is in place yet.

If the EOS/USD pair plummets below $2.4001, the downtrend will resume. There is a minor support at $2.18 below which a drop to the yearly low of $1.55 is probable. As the trend is down and the sentiment weak, a long position can quickly turn into a loss-making affair. Therefore, we have withdrawn the buy recommendation given in an earlier analysis.

We will wait for a reversal pattern to form before suggesting a trade in it. A breakout of the moving averages will be the first signal that a trend change might be around the corner. For now, we remain neutral on the pair.

Binance Coin (BNB) has been in a downtrend for the past few months. The failure of the bulls to push the price above the 50-day SMA has attracted selling that has dragged the price to the first support at $16.50.

Conversely, if the bulls buy the dip to $16.50, we anticipate another attempt to break out of the critical resistance of the 50-day SMA. If the bulls can propel the BNB/USD pair above the 50-day SMA and the channel, it will indicate a probable change in trend. This can offer a low-risk buying opportunity, hence, traders can initiate long positions as suggested by us in an earlier analysis.

Bitcoin SV (BSV) broke out of the 50-day SMA and the overhead resistance of $107 on Oct. 21. However, the bulls could not sustain the breakout as the price slipped back below $107 on the next day. Currently, the price has plunged below the 50-day SMA, which shows that bears continue to pound the altcoin.

The 20-day EMA is the immediate support. If it holds, the bulls will attempt to push the price back above the $107 to $115.170 resistance zone. A breakout of this zone will indicate that the downtrend has ended. Conversely, if the bears sink the BSV/USD pair below the 20-day EMA and $90.40, a drop to $78.506 is likely.

The tight range in Stellar (XLM) has resolved to the downside. This is a negative sign as it shows that bears have asserted their supremacy. The next support on the downside is close to $0.056 and below it $0.051014.

If the support levels fail to hold, the downtrend will resume and the next target objective is way lower at $0.028934. Therefore, traders can keep a stop loss of $0.051 on the long positions.

However, if the bulls defend the support levels, we anticipate another attempt to break out of the downtrend line.

After trading close to the moving averages for the past few days, Tron (TRX) has broken down. It has a minor support at $0.0136940 below which the decline can extend to the next support zone of $0.0116262 to $0.011240. A break below the zone will be a huge negative as the downtrend will resume.

However, if the TRX/USD pair bounces off the immediate support at $0.0136940, the bulls will once again attempt to push the price above the overhead resistance of $0.018660.

Considering the negative sentiment, we will withdraw our buy suggestion given in an earlier analysis. We will watch the price action for the next few days and look for signs of a possible turnaround before proposing a trade in it once again.