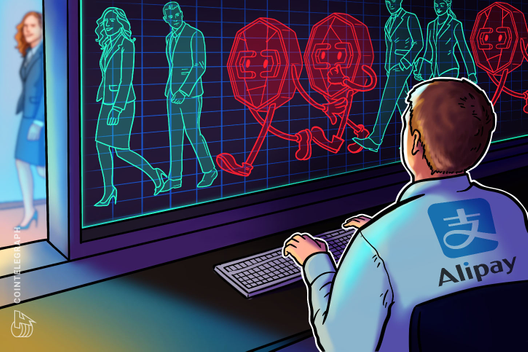 Earlier in October 2019, Binance announced a fiat on-ramp for crypto trading via Chinese payment services Alipay and WeChat. This move was part of the exchange giant’s peer-to-peer (P2P) trading rollout for Bitcoin (BTC), Ether (ETH) and Tether (USDT) against the Chinese yuan.

The public nature of this announcement did bring questions to the fore regarding the use of payment channels like Alipay and WeChat for crypto trading. Alipay did, in fact, release statements distancing itself from cryptocurrency trading activities, with Binance later clarifying that it wasn’t working directly with the aforementioned payment services.

Meanwhile the evolving narrative around the situation speaks to the legal status of Bitcoin and cryptocurrencies in China. Even with a trading ban in place, there are whispers of a booming P2P trading arena, with authorities in Beijing seeming to adopt a “see no evil, hear no evil, speak no evil” approach.

However, whenever these reports do make it into the public domain, Chinese authorities and businesses are swift to put a lid on them. Perhaps the arrival of the country’s proposed digital currency might necessitate the emergence of more clear-cut handling of crypto commerce in China.

Alipay wants nothing to do with Bitcoin

As previously reported by Cointelegraph, Alibaba-owned payment channel Alipay has moved to ban transactions involving Bitcoin and other cryptocurrencies. In an email to Cointelegraph, a spokesperson for the platform wrote:

“Alipay closely monitors over-the-counter (OTC) transactions to identify irregular behavior and ensure compliance with relevant regulations. If any transactions are identified as being related to bitcoin or other virtual currencies, we immediately stop the relevant payment services.”

This statement came in response to reports that Chinese crypto traders were using the platform as a P2P trading marketplace. Crypto exchange giant Binance even announced that it had enabled support for fiat deposits via Alipay and WeChat.

Cointelegraph spoke with Filipe Castro, co-founder and chief information officer of Utrust — a Swiss-based digital payments processor — about the Alipay announcement. “AliPay, as many other established companies are still focused on their traditional business models and see this ecosystem as a challenger,” Castro said.

For the Utrust chief, Alipay’s status as a major player in China’s electronic payment arena means it has to work toward balancing the need for increasing revenue streams and compliance with directives from authorities in Beijing. Castro also highlighted the less than favorable standing held by the crypto industry in China, noting:

“Mainland China has strict laws banning gambling, and many still see cryptocurrency as such. Alipay and other providers still look at other cryptocurrency providers as investment outlets and not payment vehicles. Thus, until this perception changes, it is likely that current measures will stay in force.”

In an interview with Cointelegraph, Celine Lu, founder and CEO of BitDeer — a hashpower sharing platform — provided further insight. According to Lu, the Chinese government pays particular attention to the activities of popular third-party payment processors like Alipay:

“In these regulations, the state clarifies the nature of Bitcoin as a virtual commodity. At the same time, for the purpose of prevention of risks to the financial system, the relevant regulations limit the participation of financial institutions and payment institutions in Bitcoin-related activities.”

Alipay isn’t alone in coming out to distance itself from Bitcoin OTC trading. Back in May 2019, WeChat changed its payment policy, forbidding the use of its platform for P2P transactions.

Is it all about the narrative?

However, despite Alipay coming out to deny the use of its platform for Bitcoin OTC trading, several commentators say the practice is common in China. The summary of the arguments posited by many is that such activities while illegal on paper, fall into a regulatory gray area.

To clarify, Bitcoin OTC trading is not in itself illegal in China. Back in May 2019, the government revealed that the 2017 trading and initial coin offering (ICO) ban did not affect Bitcoin’s legal status as a property that can be held or exchanged via P2P channels.

Indeed, following the 2017 trading and ICO ban, reports began to emerge of growing P2P Bitcoin trading in China. Platforms like WeChat became marketplaces for the convergence of prospective buyers and sellers.

There are even reports that major crypto exchanges use these backchannel avenues to conduct P2P Bitcoin trading in China. These exchanges reportedly mask such activities by using the guise of running a P2P trading desk for the BTC/USDT trading pair. OTC P2P trading reportedly accounts for the overwhelming majority of Chinese BTC/CNY trading. Users place manual buy and sell orders, with the exchanges acting as the go-between.

Given the informal nature of the arrangement, counterparty risk becomes a major problem. The buyer reportedly has to send fiat payments first before receiving the agreed-upon Bitcoin. Thus, these marketplaces tend to put in a lot of effort in ensuring that participants hold to their respective ends of the bargain.

The fiat payment part of the deal requires channels like WeChat, Alipay or wire transfers. However, financial institutions in mainland China are barred from facilitating crypto transactions. Thus, users of such channels usually run the risk of having their accounts terminated.

However, some commentators allege that such practices are possible not because of regulatory loopholes but due to an unwritten “implied consent” of some Chinese government officials. These people claim that crypto exchanges have forged useful relationships with key actors in Beijing that help to smoothen any legal wrinkles.

While the Alipay/Binance situation was unfolding, a Twitter account named Blocfilo posted some startling revelations about the Chinese crypto trading scene. Allegedly, despite the trading ban, many cryptocurrency exchanges still operate and have their headquarters in mainland China. The self-professed crypto exchange analyst also tweeted that government officials are prepared to look the other way as long as they receive bribes from the platforms. Excerpts from the thread read:

“You just gotta pay the government officials some money and you can operate just fine under the radar. A lot of crypto exchanges have already become banks to certain extent. Only the legitimate ones will survive in the long run though.”

Cointelegraph reached out to several Chinese crypto exchanges to ascertain the veracity of these claims. The platforms that responded declined to comment on the matter. If such statements are true, then it appears authorities in Beijing seem more concerned with optics rather than actual trading activities.

Crypto-yuan: To be or not to be?

Back in April 2018, Chinese social media-based news platform cnLedger revealed that there was a booming Bitcoin OTC trade for crypto bulls in the country. As reported by Cointelegraph at the time, traders in China were paying a premium for BTC via these OTC desks. Chinese traders exchange CNY for USDT, which is then used to purchase BTC overseas. Such activities bring capital control issues with yuan deposits leaving the country.

Indeed, one of the objections raised by China to Facebook’s proposed Libra cryptocurrency project is the potential impact on its capital control efforts. Some countries in Europe, such as Germany and France, say Libra could have troubling implications for the monetary sovereignty of nations.

Related: Chinese National Cryptocurrency Turns Out Not Being an Actual Crypto

There has been talk for some time of the People’s Bank of China (PBoC) creating a digital yuan currency. Some commentators suggest that such a move even presents greater prominence following the Libra announcement.

China already has a well-developed electronic payment ecosystem with the likes of Alipay and WeChat dominating the scene. The coming of a digital yuan is seen by some as an effort by the government to prevent the penetration of cryptocurrencies into the space.

Cointelegraph asked Utrust’s Castro about the potential impact of Alipay’s announcement distancing itself from Bitcoin trading on the future of crypto payments in China. According to Castro, Alipay’s stance is not surprising given what it has said in the past, adding:

“The advent of an e-Yuan digital currency, natively developed in China could help shape its strategic stance going forward. Competition from Libra and other private initiatives can undoubtedly act as a catalyst that accelerates this process.”

As reported by Cointelegraph, there is still no official consensus on the exact release date for the proposed digital yuan currency. Back in August, reports emerged that the PBoC was ready to roll out the central bank digital currency, or CBDC. However, conflicting revelations emerged a month later saying the central bank still required more time to study the pros and cons.

China’s proposed digital currency coupled with Facebook’s foray into the market has also reportedly spooked several key actors within the European Union. In an op-ed in the Financial Times, Bruno Le Maire, France’s finance minister, urged the EU to consider creating its own digital currency. According to Le Maire:

“We [the European Central Bank] should consider the creation of central banks’ own digital currencies, in the medium to long term. We cannot let China be the only player in this field. Our independence is at stake.”

Le Maire’s aversion to the involvement of private institutions in global monetary affairs echoes some of the sentiments the Utrust co-founder shared with Cointelegraph. During the interview, Castro highlighted the still-prevailing negative rhetoric surrounding the industry, stating, “There are many challenges still ahead, namely the establishment of a good, credible and trustworthy brand reputation for the cryptocurrency ecosystem.”

For now, the likes of Alipay need to maintain a public perception of crypto-aversion, even if private dealings reveal otherwise. Perhaps a time will come when governments will no longer be able to cast the industry in a bad light and cryptocurrencies will usher in the expected global electronic payment revolution. 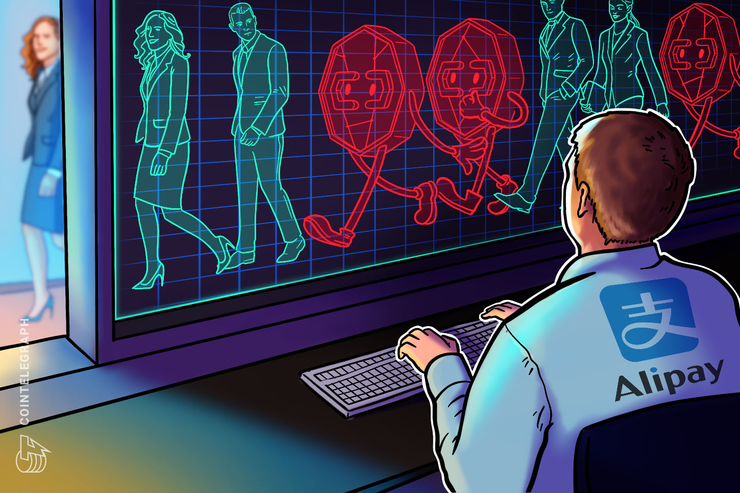