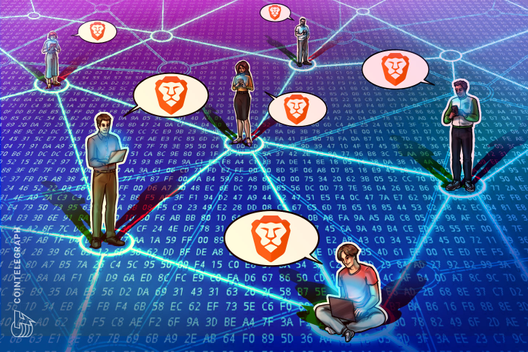 Furthermore, daily active users stand at over 2.8 million and the number of creators subscribed to its web advertisement network also reportedly substantially increased.

There are also over 290,000 Brave Verified Publishers who subscribed to the advertisement platform powered by Brave’s Basic Attention Tokens (BAT). The composition of those publishers is the following:

“200,000 of those are YouTube creators, 33,000 are website publishers or creators, 15,000 are Twitch streamers, and since we announced our support for Twitter tipping on August 1st, 28,000 Twitter accounts have joined to receive Basic Attention Tokens. ”

The browser launched its ads on an opt-in basis just over six months ago. Since then, the company reportedly concluded 385 campaigns on its platform and accumulated 97 million ad confirmation events. Brave also claims high user engagement rates with its ads:

“Platform engagement is extremely high, with a click-through rate of 14% (the industry average is just 2%). More importantly, 12% of click-throughs result in page visits of 10 seconds or longer. There have been 2.36 million 10-second active page visits overall.”

One campaign provided as an example by Brave is the ads bought by computer chip manufacturing giant Intel for its Intel Gamer Days 2019. In the initiative, the CPU producer used “Brave Ads as a social driver to reward participation for spreading the word about the upcoming Gamer Days events.”

Another example featured in the announcement was also the latest Brave Ads Grant, which was awarded to The Lupus Foundation of America. As part of the initiative, the foundation verified their website as a Brave Creator and allowed Brave Ads to drive people directly to their site to tip and auto-contribute, in addition to traditional contribution options.

As of press time, cryptocurrency market data platform Coin360 shows that BAT — currently worth $0.226 per coin — has seen its value increase by about 11.65% over the last 24 hours.

As Cointelegraph reported in September, Brave browser has become more popular than its rivals such as Firefox, Opera and Chrome in Japan.