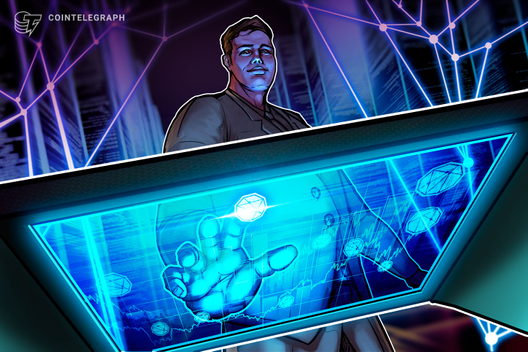 Bitcoin failed to break resistance at $8.8K but XRP and ETH are now showing signs of a possible recovery

Bitcoin price (BTC) bulls looked as if they were taking charge last week as BTC/USD rose by over $1,000, albeit momentarily.

After this point, 50% of the weekly gains were wiped out in a matter of minutes as it fell back down to the $8,300 range.

As Bitcoin price attempts another recovery, could we start to see altcoins regaining momentum? A look at this week’s charts across the top-3 cryptocurrencies certainly paints a very interesting picture. 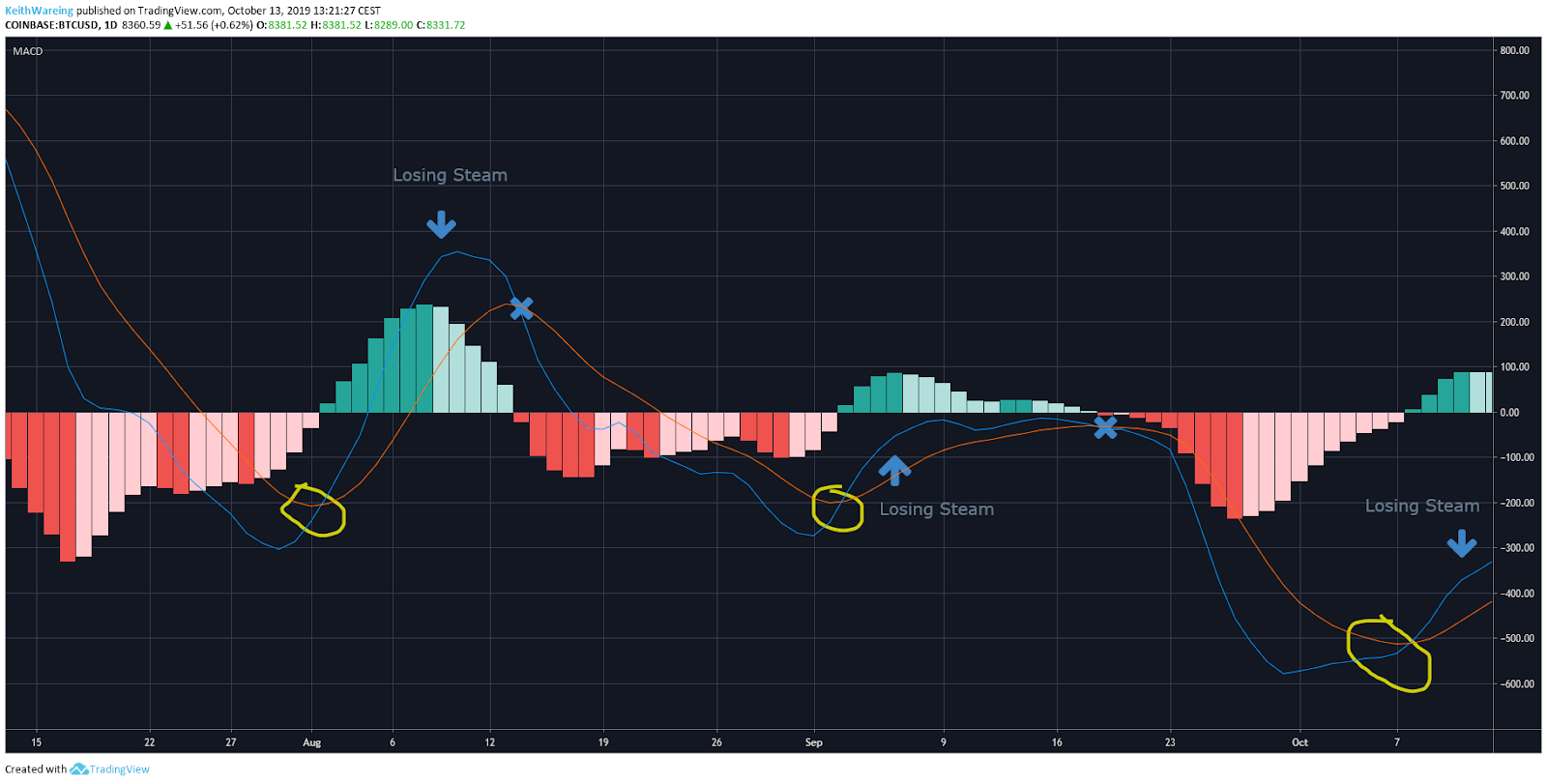 As can be seen on the daily charts, the blue MACD crossed bullish through the signal line on Oct. 7. The short-lived move, which was anticipated in last week’s analysis, began to lose steam on Oct. 11 as can be seen from the change in the trajectory of the blue line, which typically leads to a reversal a few days later, as highlighted in the chart above. 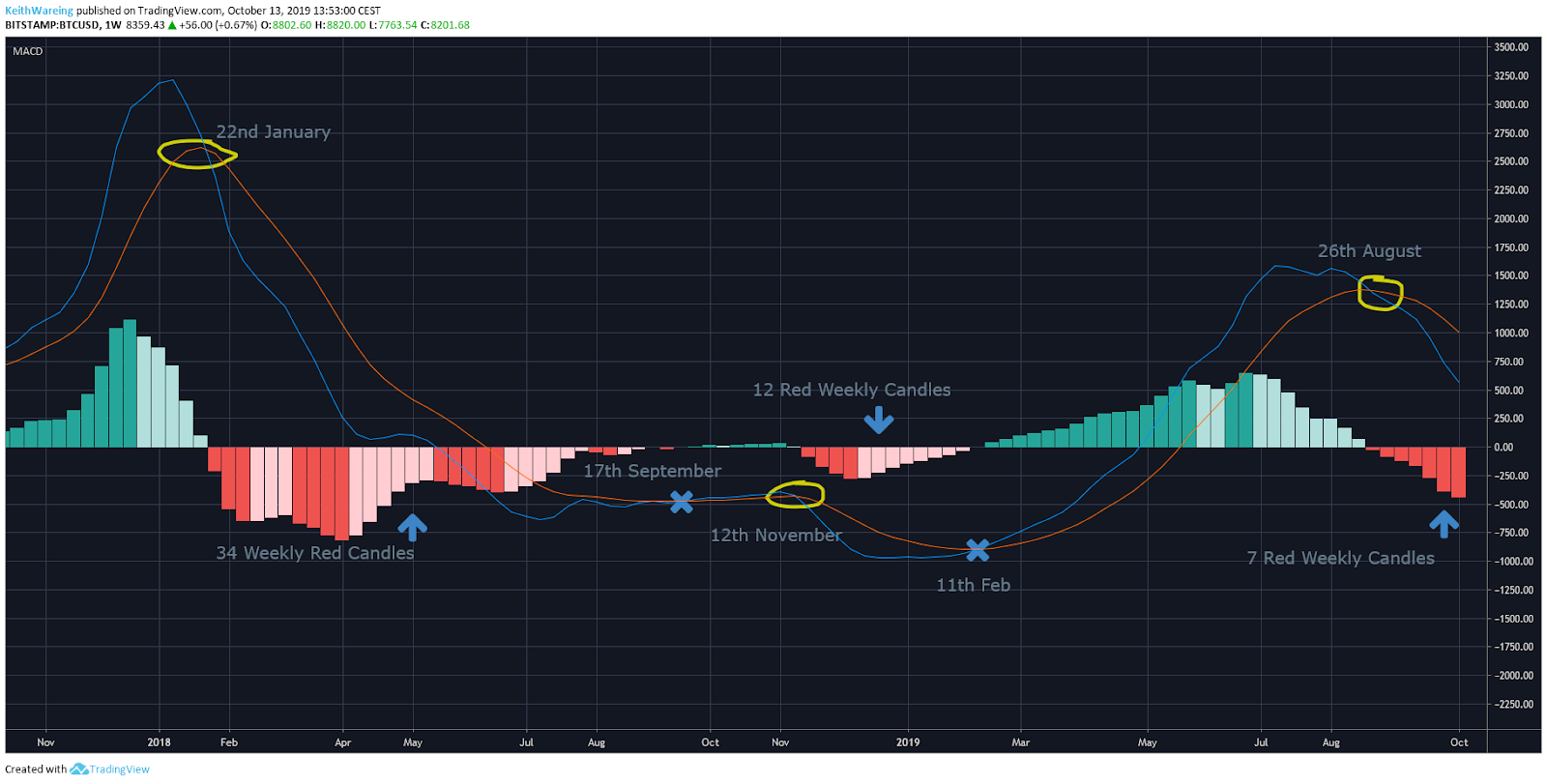 The weekly chart for Bitcoin paints a very different picture, however. After printing a seventh dark red candle on the MACD histogram, bulls can only hope that the past week’s activity will bring a pale pink candle, which would indicate that the downward move for the digital asset is drawing to a close.

That being said, the last time BTC had a bearish MACD cross on the weekly it took 12 weeks between Nov. 12 and Feb. 11 to start a recovery. Whereas before that, it took 34 weeks for Bitcoin to start showing signs of a bullish reversal. 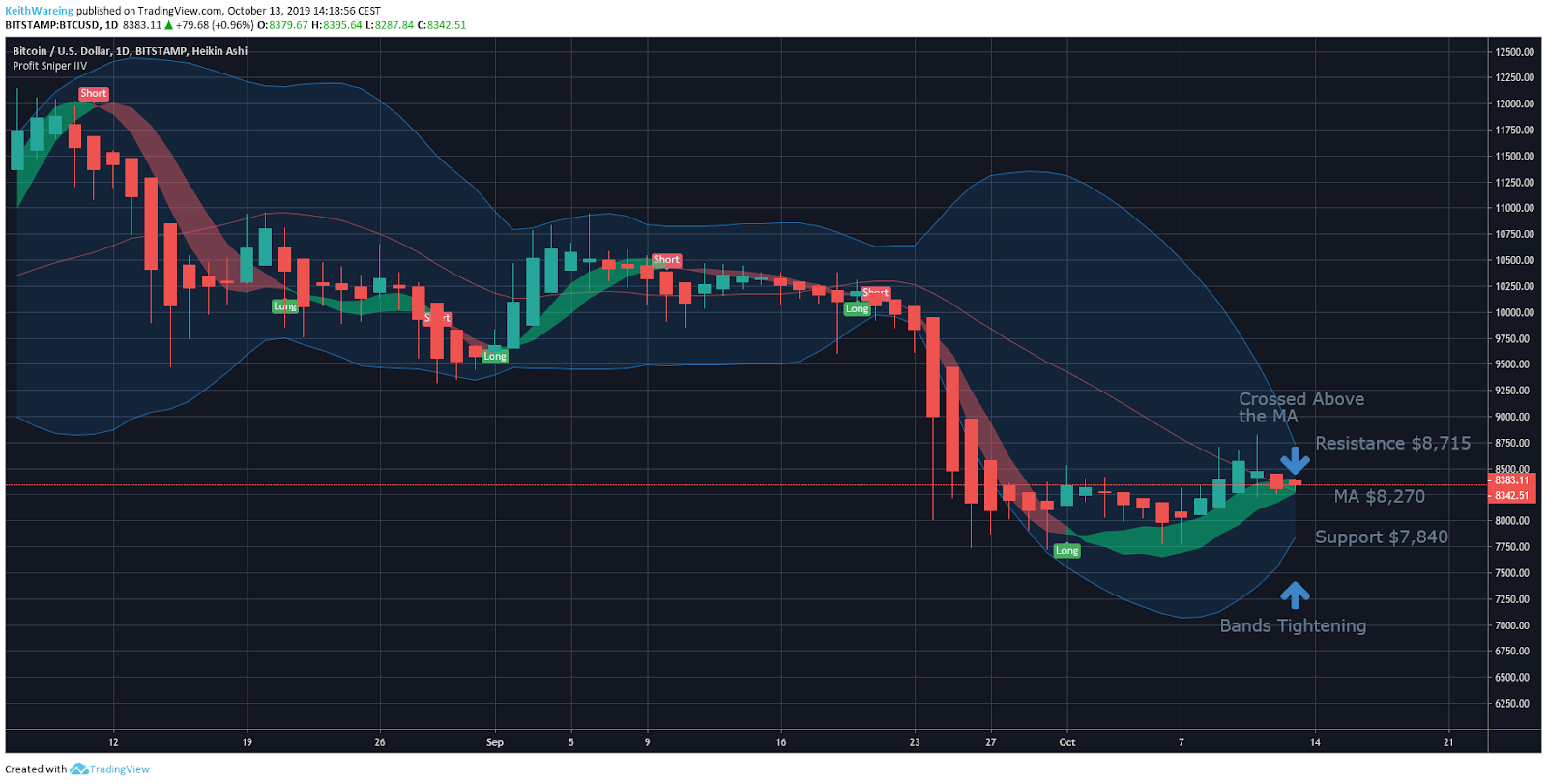 Interestingly, the Bollinger Bands (BB) indicator, which serves as dynamic support and resistance, are showing signs of a big move to come soon.

As the Bitcoin price continues to consolidate in a sidewards range the bands start to close in. This is an early sign that BTC/USD will soon get a big breakout — likely this coming week — which will either be a continuation of the current trend or a reversal.

One positive sign here is that the current price of Bitcoin is sitting above the BB day moving average. On the flip side, it also means that the support is getting higher by the day, and has already moved up from $7,120 to $7,840.

This means that another downward move of $500 as seen on Oct. 11 could potentially see Bitcoin price extend down to the next levels of support on the weekly and monthly timeframes.

Should the bulls take control, however, and break through the resistance of $8,715, BTC/USD could establish a strong foothold on the weekly chart. 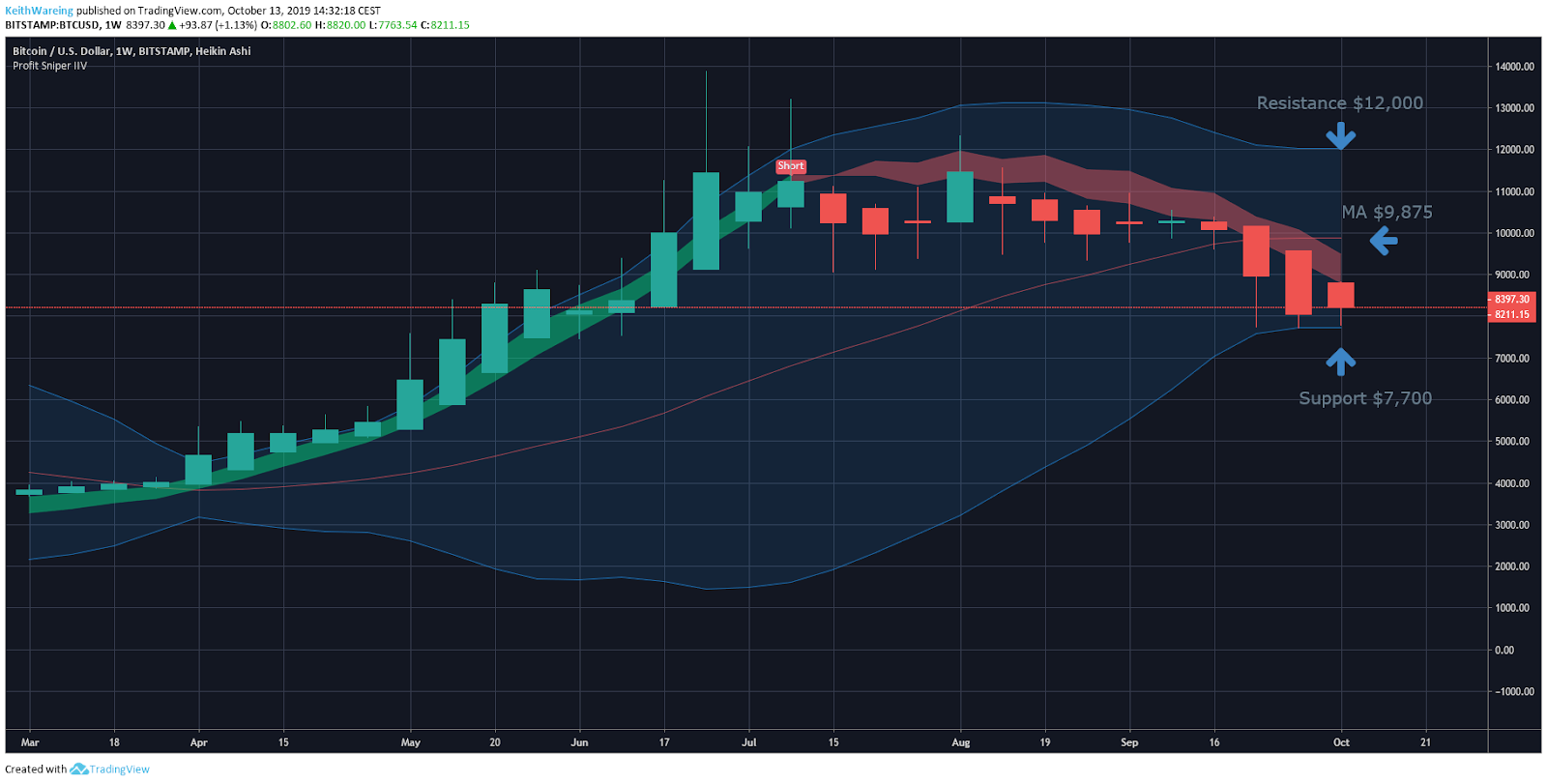 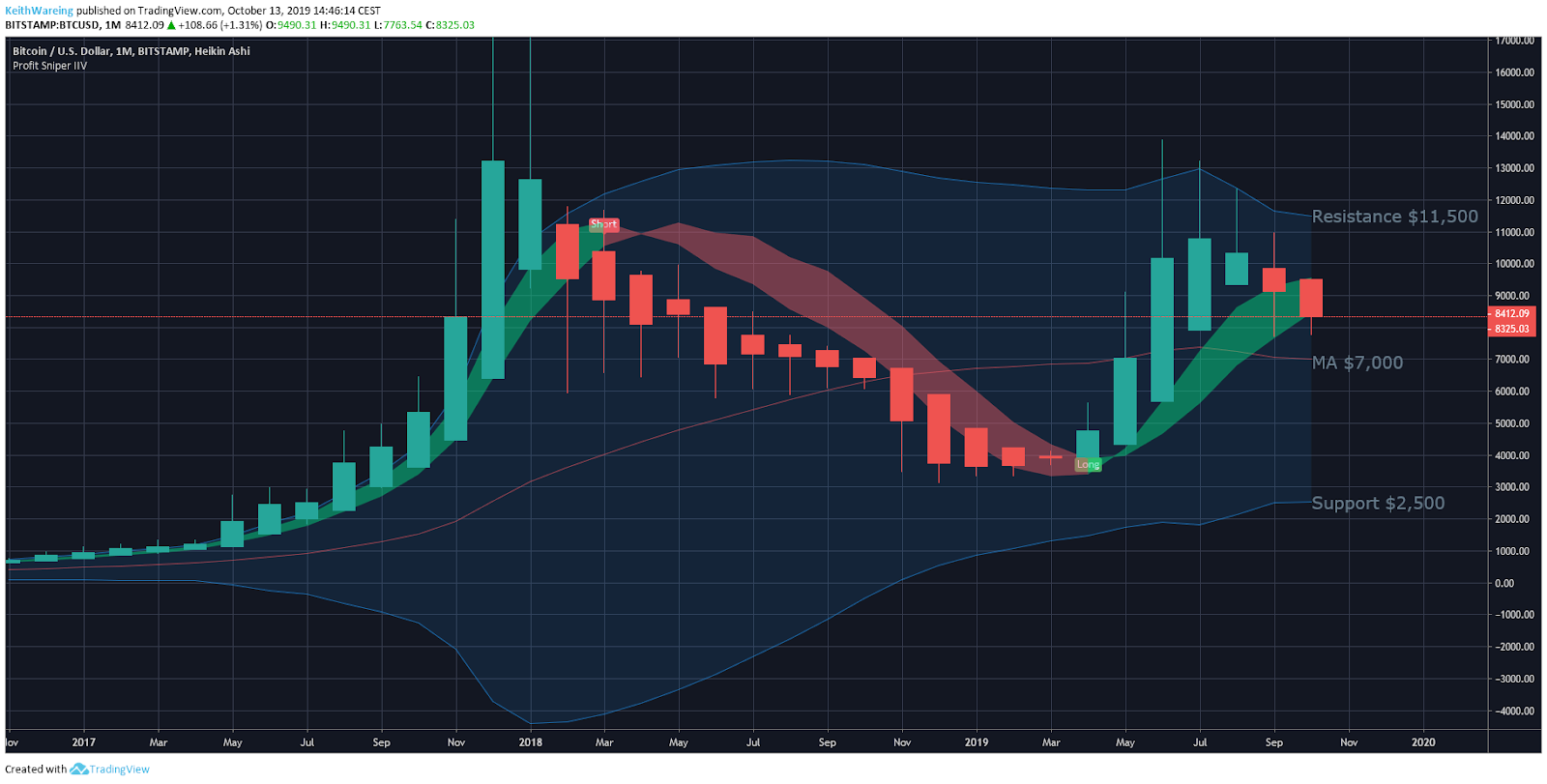 The monthly view for Bitcoin Bollinger Bands shows that BTC is firmly planted in a middle range between $7,000 and $11,500.

These two levels can be very helpful in determining the short-term price outlook. Falling below $7,000 is still a very real risk at this point, and doing so could see Bitcoin spiral into freefall with the bottom being at levels very few want to see.

At present, the information provided by both BB and the MACD is to expect a continued period of consolidation with $7,000 being the critical support.

XRP/USD looking to break out

One coin that looks set to break out from its bearish cycle in the short-term is XRP. This past week there’s been a noticeable uptick in social media coverage after Ripple CEO Brad Garlinghouse appeared in a candid interview on the „Off the Chain“ podcast hosted by Anthony Pompliano.

Garlinghouse addressed the controversial issues surrounding XRP, such as Ripple’s substantial holdings and speculation around the possible classification of XRP as a security.

Luckily for Ripple, this media exposure has appeared to give XRP a boost, and from a technical point of view, the timing couldn’t be better. 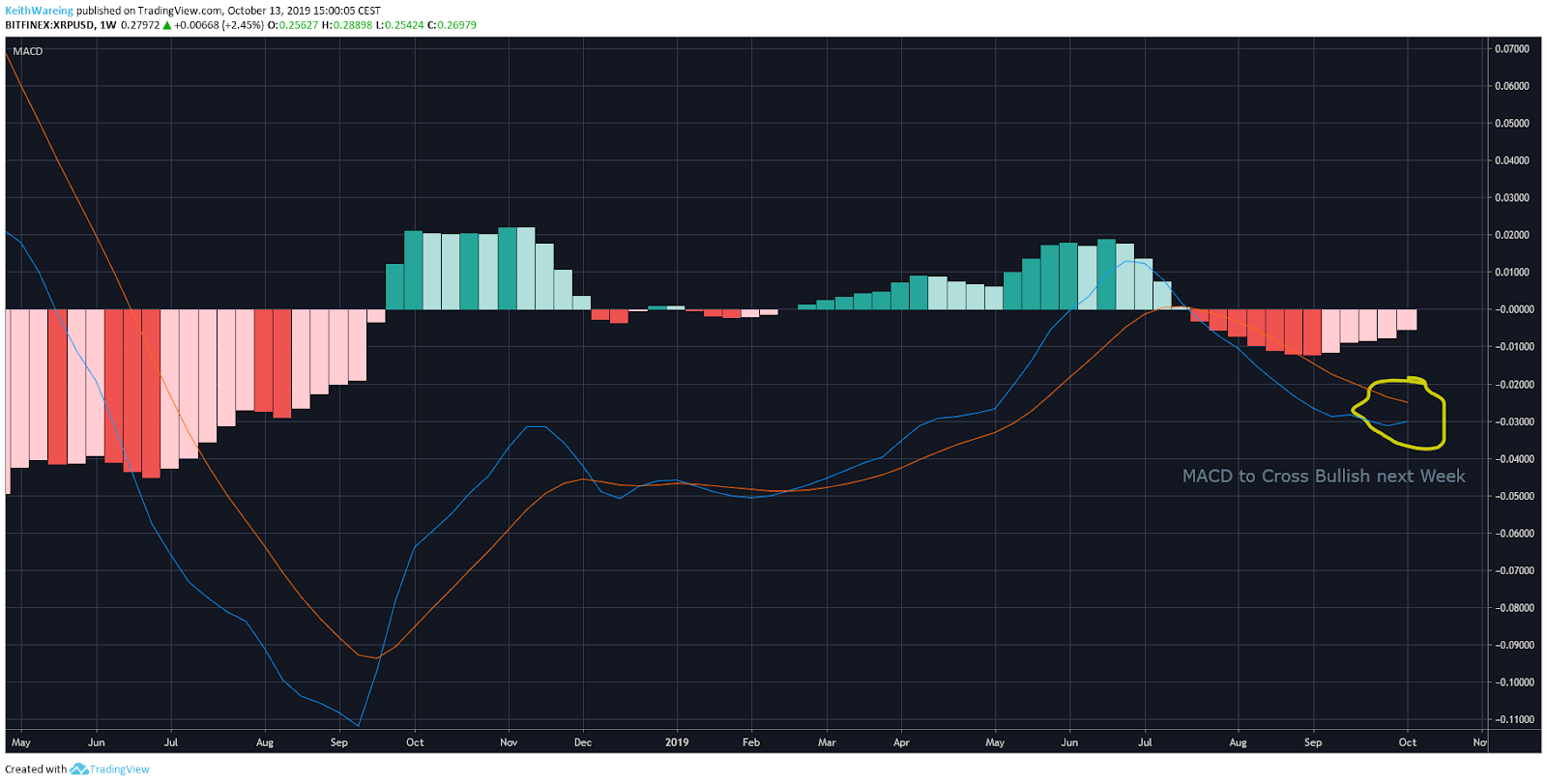 The MACD on the weekly chart for XRP/USD looks primed to cross bullish on the next candle close. XRP has fallen in value by over 50% since its yearly high of $0.51 in June, and this next move could set it on a path to overtake Ether (ETH) by market cap over the coming weeks. 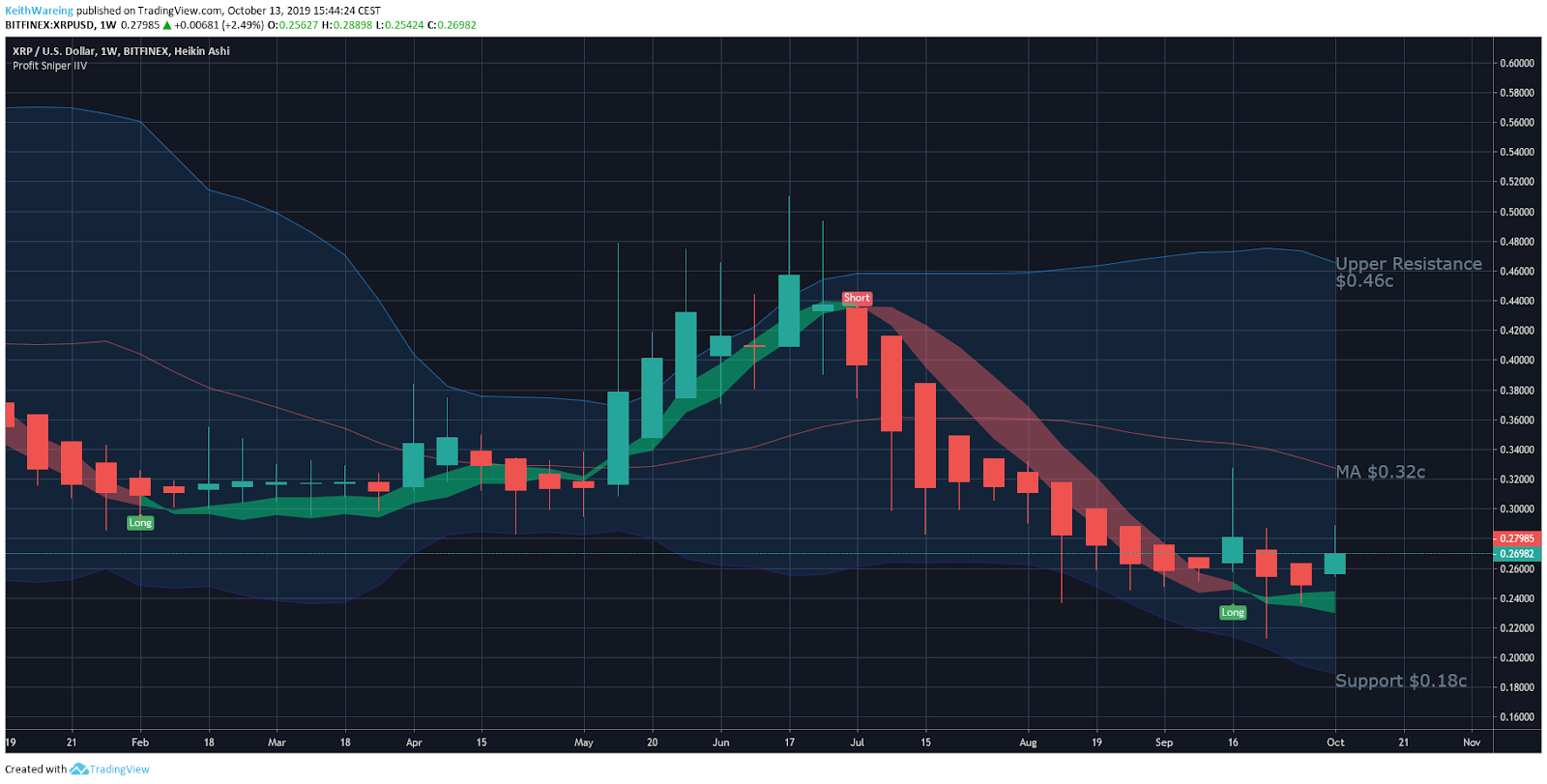 The range on the weekly Bollinger Bands shows the first level of resistance at around $0.32 for XRP, with support sitting around $0.18.

A move past the Weekly Moving Average could put the controversial digital asset on a path to $0.46, which based on the current circulating supply of 43,166,787,298 XRP would put the market cap at $19.8 billion, nearly matching that of Ether’s, which has a market cap of $19.9 billion.

A flippening in the cards?

Ether might not give up its place as the second-largest cryptocurrency by market capitalization quite so easily, however.

The weekly MACD for ETH is showing early signs of an end to its bearish divergence as denoted by the last weekly candle on the weekly histogram being pale pink rather than red.  However, the MACD line is yet to show signs of crossing up. 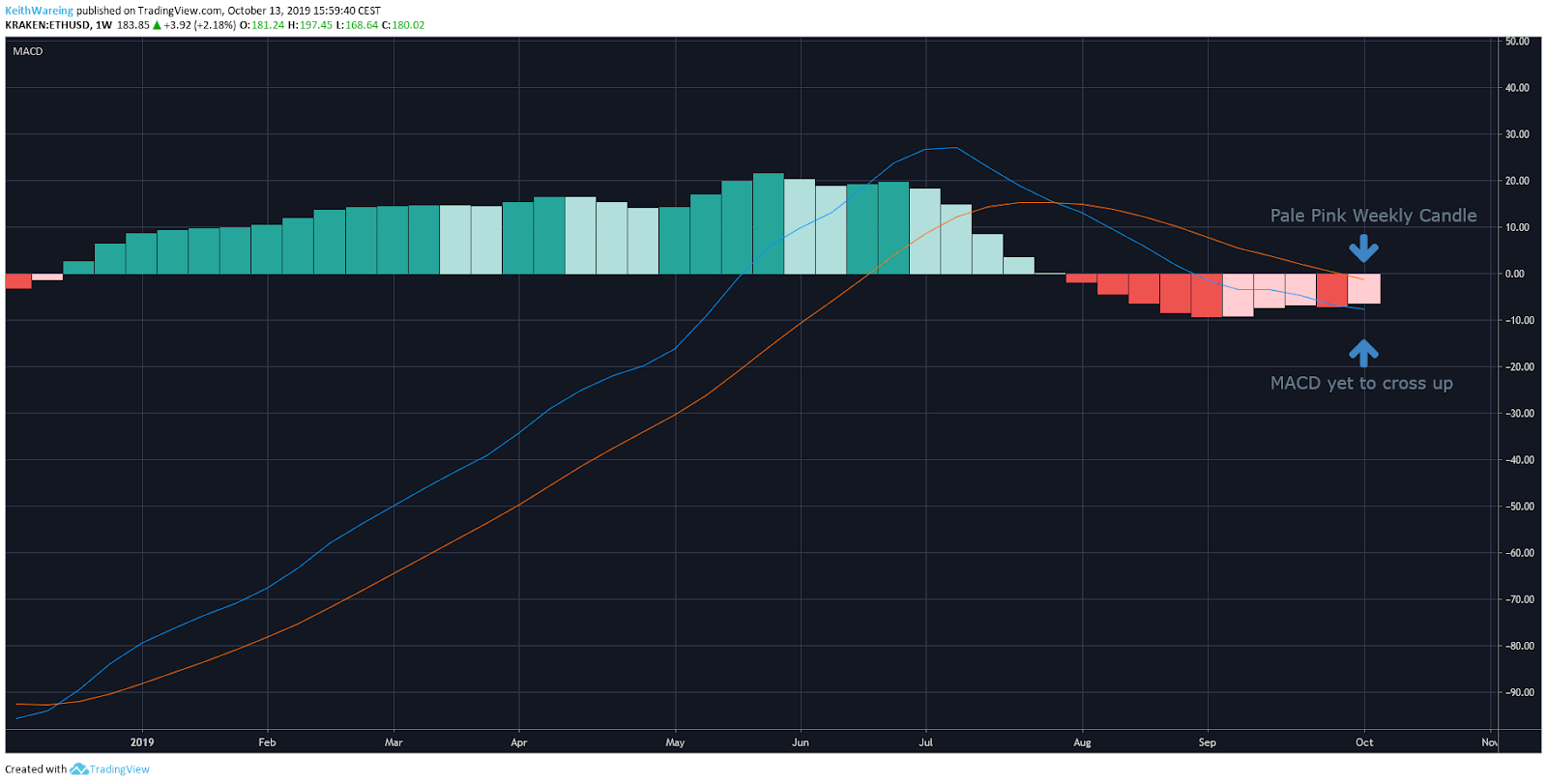 The Bollinger Bands for Ether show us that the current price of around $183 is equidistant from the support and resistance.

As such if the bearish divergence continues, ETH/USD will need to hold support at $138.  However, if a reversal plays out throughout the week, the price could have a go at $220 before being rejected.

However, if Ether gets locked in a sidewards range as with Bitcoin lately, it could be bad news for Ether’s place as the number two cryptocurrency by market cap. 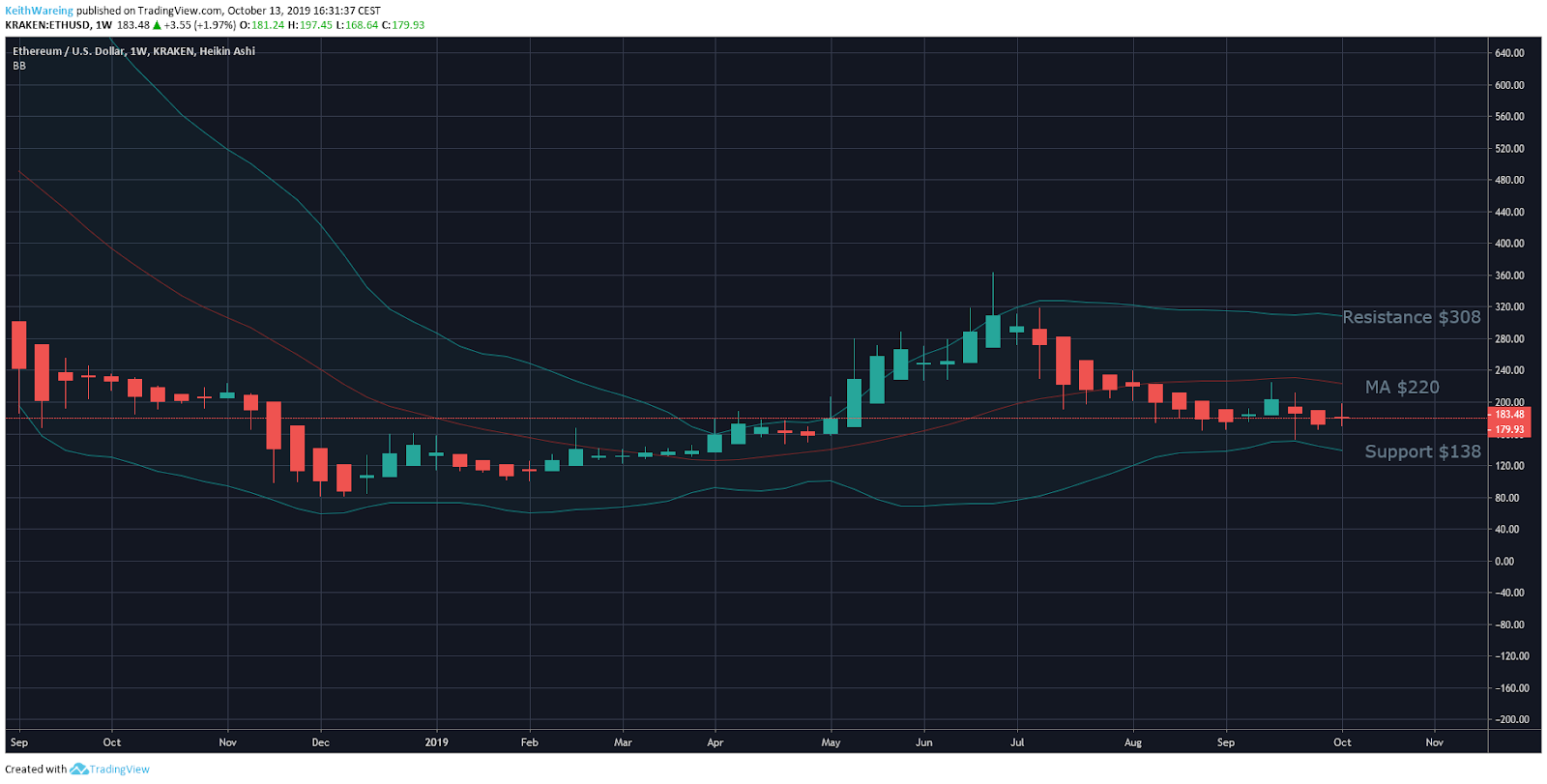 If Bitcoin pushes past $8,715, it will put the bulls back on track to break the 200 Day Moving Average again.

From here, the next levels of resistance are likely to be found around $9,875 and then it’s onto $12,000. Breaking this key $12K level even by a wick puts it on a path to break the yearly high.

Bitcoin needs to fend off $7,880 and $7,000 to stop it from falling to unfathomable lows. But while a break below $7,000 doesn’t necessarily mean $2,500 is in play, it could see BTC find a middle range between the two values or somewhere in the $5,000 range as a possible outcome in the coming weeks.

Bitcoin failed to break resistance at $8.8K but XRP and ETH are now showing signs of a possible recovery