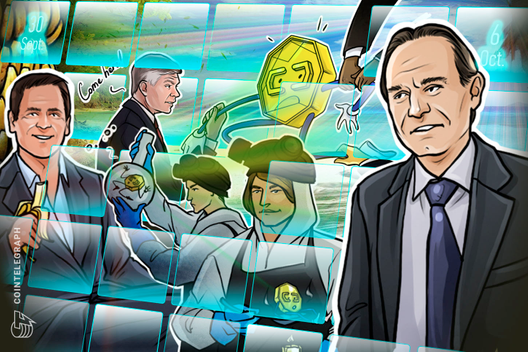 In this week’s Hodler’s Digest, PayPal pulls out of Libra, crypto markets struggle to recover, and Mark Cuban really doesn’t like Bitcoin

PayPal officially pulls out of the Libra Association

It’s official: PayPal has left the Libra Association — the governing body of Facebook’s embattled digital currency. Although the payment processing giant says it remains supportive of the stablecoin’s aspirations, the company was absent from a meeting of 28 Libra backers on Thursday. Others may follow suit. On Wednesday, reports suggested Mastercard and Visa were also unsure about whether they wished to become paid-up participants. Some companies believe Facebook exaggerated claims that regulators were comfortable with Libra — something that evidently isn’t the case given the recent backlash. They also fear that regulatory scrutiny could end up bleeding into their own businesses. In other developments this week, leaked audio of Q&A sessions hosted by Mark Zuckerberg in July revealed the CEO wanted to take a consultative approach to get the project off the ground. Meanwhile, American banks on the Federal Advisory Council warned Libra has the potential to create a “shadow banking” system — substantially reducing bank payment volumes.

Crypto investors who were hoping to see signs of recovery in prices have been left bitterly disappointed this week. Bitcoin (BTC) has encountered some volatility, but ultimately has struggled to break away from $8,000 — a price point established during last week’s crash. A fake breakout saw BTC jump from a seven-day low of $7,746 to highs of $8,480 between Sept. 29 and Oct. 1, but the gains were not to last, with the world’s dominant cryptocurrency retracing back to its earlier price level. Analysts say BTC needs to break upward before altcoins can start outperforming it. Also this week, a markets overview from Binance Research singled out the launch of institutional trading platform Bakkt as a contributing factor in Bitcoin’s price slip.

Major U.S. exchanges to jointly define which cryptos are securities

Established American crypto firms, Coinbase and Kraken among them, have teamed up to launch a rating system that defines which digital assets are securities. The so-called Crypto Ratings Council is designed to provide more clarity on which tokens can be traded without the supervision of regulators. Digital assets are scored on a scale of 1 to 5 — with the highest score indicating that a certain token is considered as a security that cannot be issued, sold or traded by unregulated firms. Executives are hoping that the U.S. Securities and Exchange Commission will view this as a positive step, but critics have claimed the council’s assessments could be compromised by conflicts of interest. In other news, the crypto exchange OKEx has announced it is creating a self-regulated organization with a view to standardizing crypto exchange compliance practices and policies.

Tim Cook has poured cold water on the idea that Apple intends to create its own digital currency. Speaking to a French media, the Apple CEO said: “I truly think currency should remain in the hands of the state. I’m not comfortable with the idea that a private entity can create a modern currency.” His remarks could be regarded as taking a direct swipe at Facebook’s Libra — and also have the potential to rile crypto proponents. Cook’s stance also flies in the face of his own executives. Last month, Jennifer Bailey, vice president of Apple Pay, said the company is monitoring developments in the crypto industry closely because it has “interesting long-term potential.” 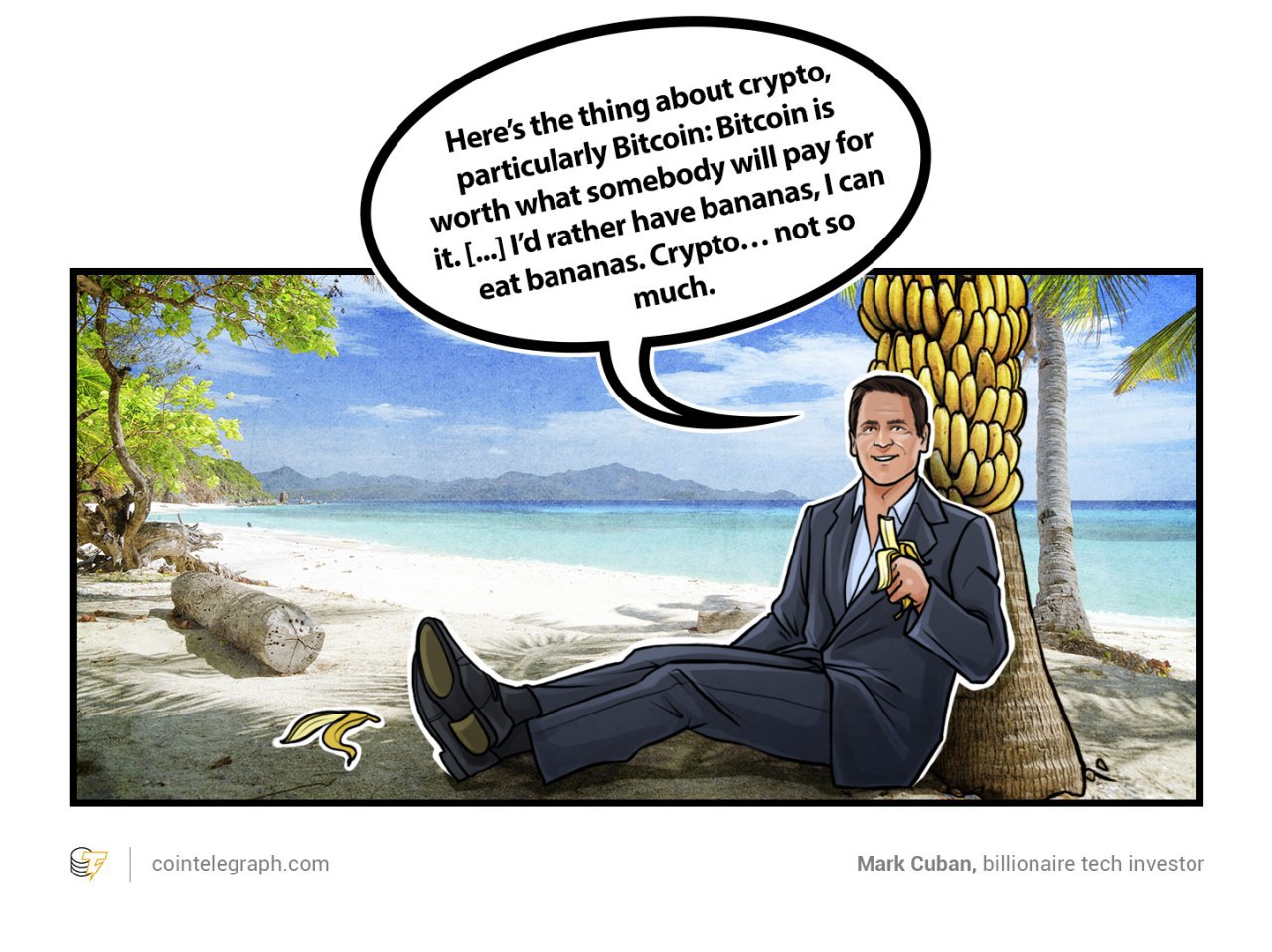 “I’d rather have bananas”: Tech billionaire Mark Cuban on Bitcoin

Billionaire technology investor Mark Cuban made his stance on crypto painfully clear this week — telling a video Q&A session he would be happier owning bananas than Bitcoin. A Twitter user had asked Cuban why he was so against crypto given his interest in “providing opportunity for people to grow their net worth.” The entrepreneur replied by arguing that BTC has no intrinsic value — just like artwork, comic books and baseball cards. Cuban then insisted that BTC is too complicated for the average person, and drew parallels between crypto and gold, adding: “You carry around a gold bar — someone’s gonna hit your ass, knock you out and steal your gold bar and it’s gonna happen again and again and again. I’d rather have bananas, I can eat bananas. Crypto… Not so much.” 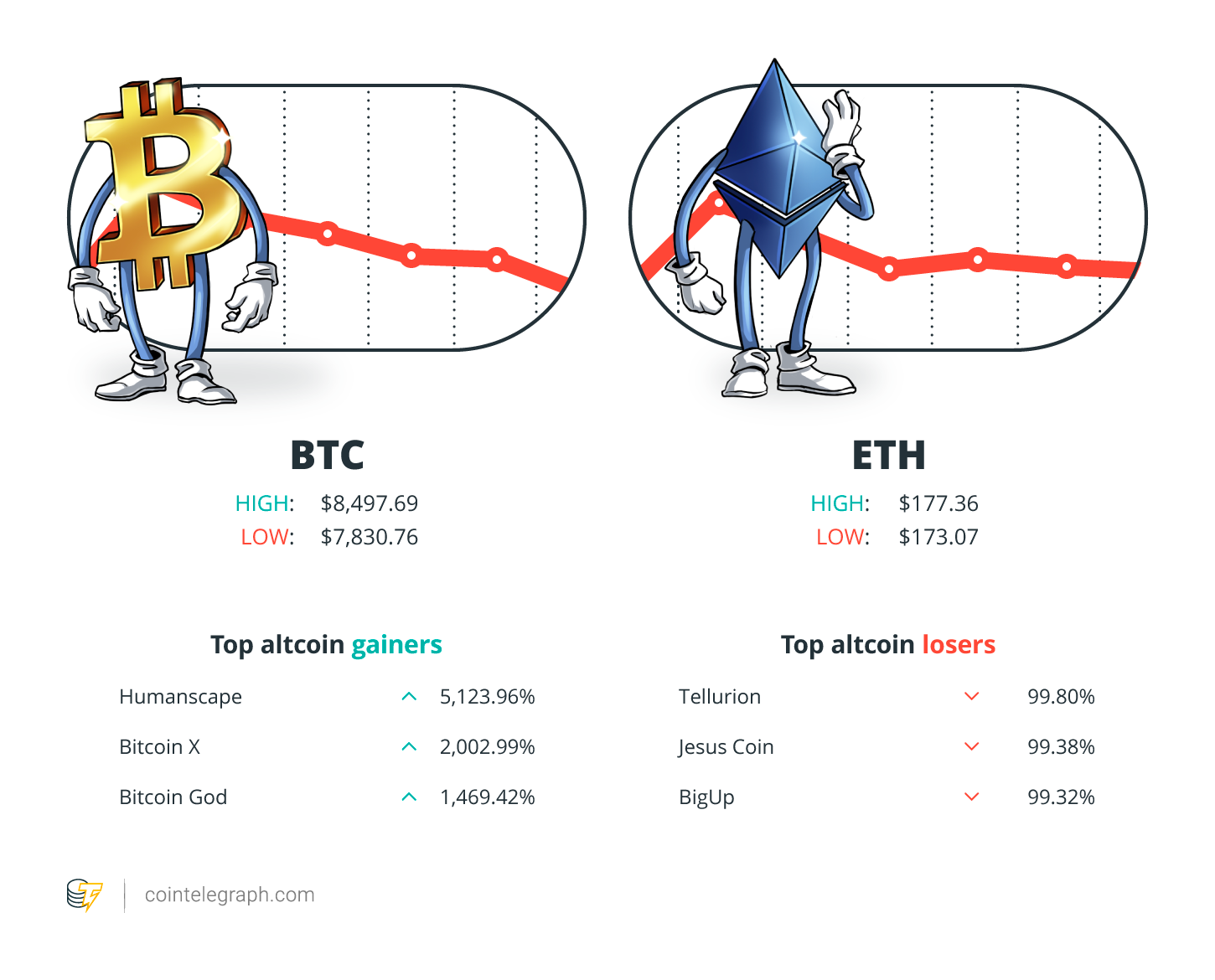 “Here’s the thing about crypto, particularly Bitcoin: Bitcoin is worth what somebody will pay for it. […] I’d rather have bananas, I can eat bananas. Crypto… not so much.”

“It [digital currency] is inevitable. […] I think it is better for us to start getting our hands around it.”

Patrick Harker, president of the Federal Reserve Bank of Philadelphia 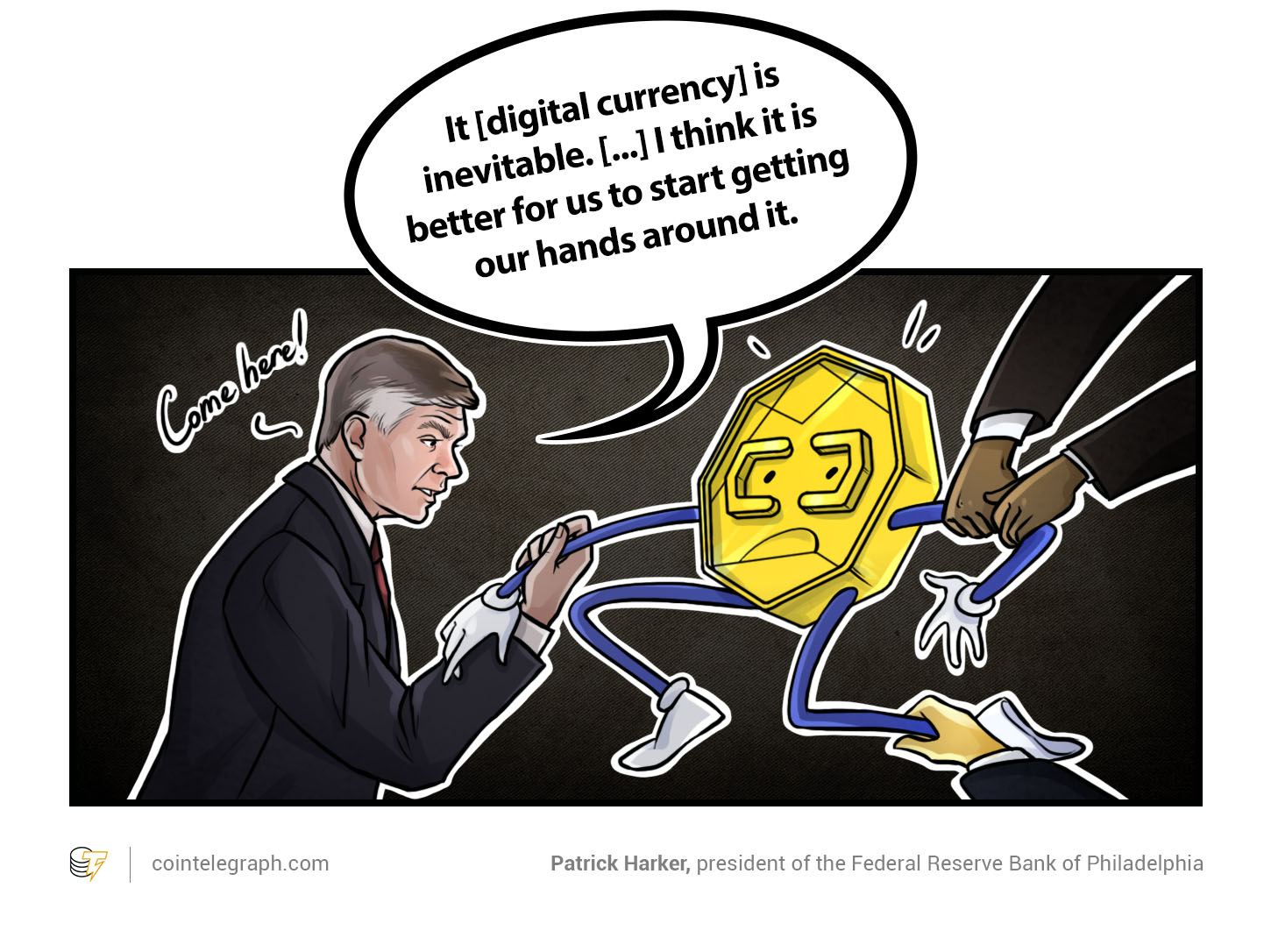 “I am much more nervous about projects which develop in a dark corner in the financial system somewhere, spread themselves out through cyberspace and one day are too big to be stopped.”

“We are concerned that the primacy of the U.S. Dollar could be in long-term jeopardy from wide adoption of digital fiat currencies. […] Is the Federal Reserve exploring the development, or actively developing, a U.S. dollar digital currency?”

“Facebook is potentially creating a digital monetary ecosystem outside of sanctioned financial markets — or a ‘shadow banking’ system.”

“Bakkt’s disappointing start seems to have been a contributing factor to the recent price decline.”

“The http://FairWin.me Ponzi Scheme contains critical vulnerabilities that put all funds at risk. Spread knowledge (especially in Asia) Users need to withdraw their funds and stop interacting with the contract ASAP.”

Munich-based BayernLB has predicted that BTC will enjoy a big leap in 2020 — suggesting that the forthcoming halving event for the major cryptocurrency has yet to be factored into its current price. Senior analysts at the bank said gold has had to earn its high stock-to-flow ratio “the hard way over the course of millennia,” but BTC is set to achieve a similar ratio within a matter of months. Stock-to-flow ratios are calculated by taking the amount of assets that is held in reserves and dividing it by the amount of an asset produced annually. Don’t expect BayernLB’s prediction to receive universal praise — gold bugs such as Peter Schiff are adamant that the risk of a rapid descent down to $4,000 or lower remains high. 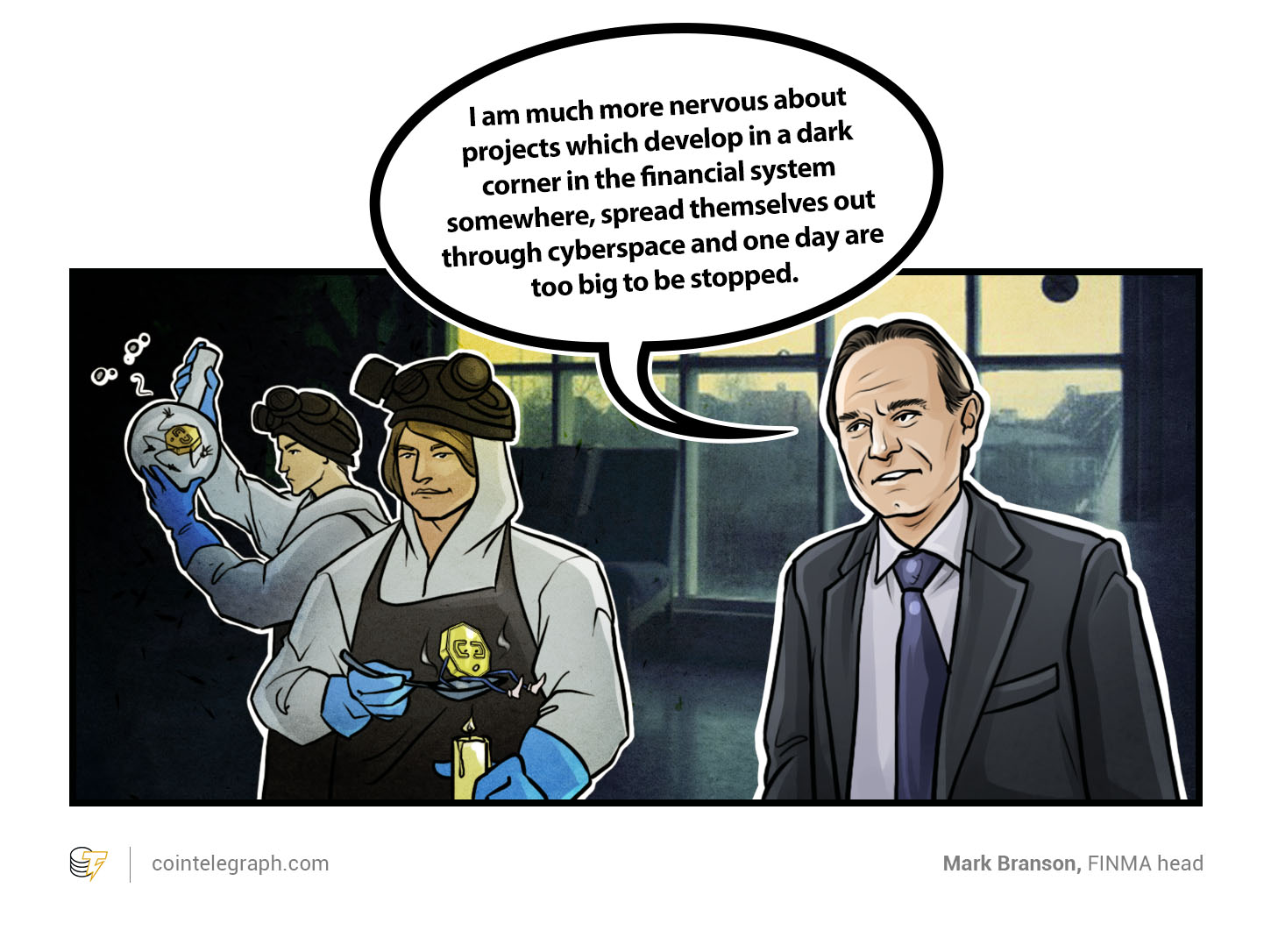 Coinexchange.io is shutting down because of financial difficulties, with the altcoin platform insisting that the closure is purely a business decision that isn’t connected to a security breach. The exchange, which supports more than 500 altcoins and has a daily trading volume of about $700,000, said the cost of providing high levels of security and customer support meant “it is no longer economically viable for us to continue offering market services.” Trading and deposits will cease within two weeks, and users are being urged to halt any activity as soon as they can. Customers are being asked to remove all remaining funds from the platform by Dec. 1.

The beginning of the week saw the Bitcoin network experience fresh turbulence — and on Tuesday, video appeared to show why. A fire has destroyed mining rings worth $10 million, with a giant data center owned by Innosilicon going up in flames. Footage appeared to show the machines continuing to run despite the fire. This coincided with a drop in Bitcoin’s hash rate — dropping from 86 quintillion hashes per second to 82. Social media users have connected the dots, but others have stressed that hash rates only provide a limited view of BTC’s overall health.

United Kingdom-based crypto wallet provider Blockchain.com has seen two of its longest-serving executives head for the exit. COO Diana Douillet Guzmán and Chris Lavery, executive vice president of finance, are both expected to leave. This is the continuation of an apparent exodus that has seen several bosses leave the company within just 12 months of being hired. It is believed that Blockchain.com’s board has investigated why so many departures are occurring — coming to the conclusion that many of the new hires were a poor fit for the crypto startup’s culture because they hailed from the traditional financial sector. Changes to the firm’s hiring process have been recommended, which include drawing on a wider pool of talent.

Crypto companies often find out the hard way that hackers know their security systems better than they do. Bug bounties have become popular in countering this, with hackers given rewards whenever they find vulnerabilities. Here, Henry Linver explores these schemes in further detail — and it seems the concept is not without its critics.

Offline transactions could create additional security layers and theoretically enable complete censorship resistance for cryptocurrencies. Osato Avan-Nomayo explores whether this could also be the silver bullet for achieving high levels of adoption worldwide.

EOS users have been experiencing periodic problems with network access, but developers insist everything is “operating correctly.” With new research claiming that the entire network can be frozen with just $6 worth of tokens, Stephen O’Neal delves into the problem, and what — if anything — Block.one is doing about it.

In this week’s Hodler’s Digest, PayPal pulls out of Libra, crypto markets struggle to recover, and Mark Cuban really doesn’t like Bitcoin