Bitcoin Price Pinned Below $8,200 as Bulls and Bears Fight for Control

Bitcoin Price Pinned Below $8,200 as Bulls and Bears Fight for Control Bitcoin needs to close above $8,200 this weekend or bears could seize the opportunity to push BTC price back below $7,800

As the weekly close approaches Bitcoin remains pinned in the $8,300 to $7,800 range. For the past few days, the digital asset has made lower daily highs and it no longer rides along the 20-MA of the Bollinger Band indicator on the 4-hour chart.

Basically, Bitcoin is losing steam and now struggles to pierce $8,200 as trading volume dries up and the Bollinger Bands tighten. All of this suggests a move is imminent. 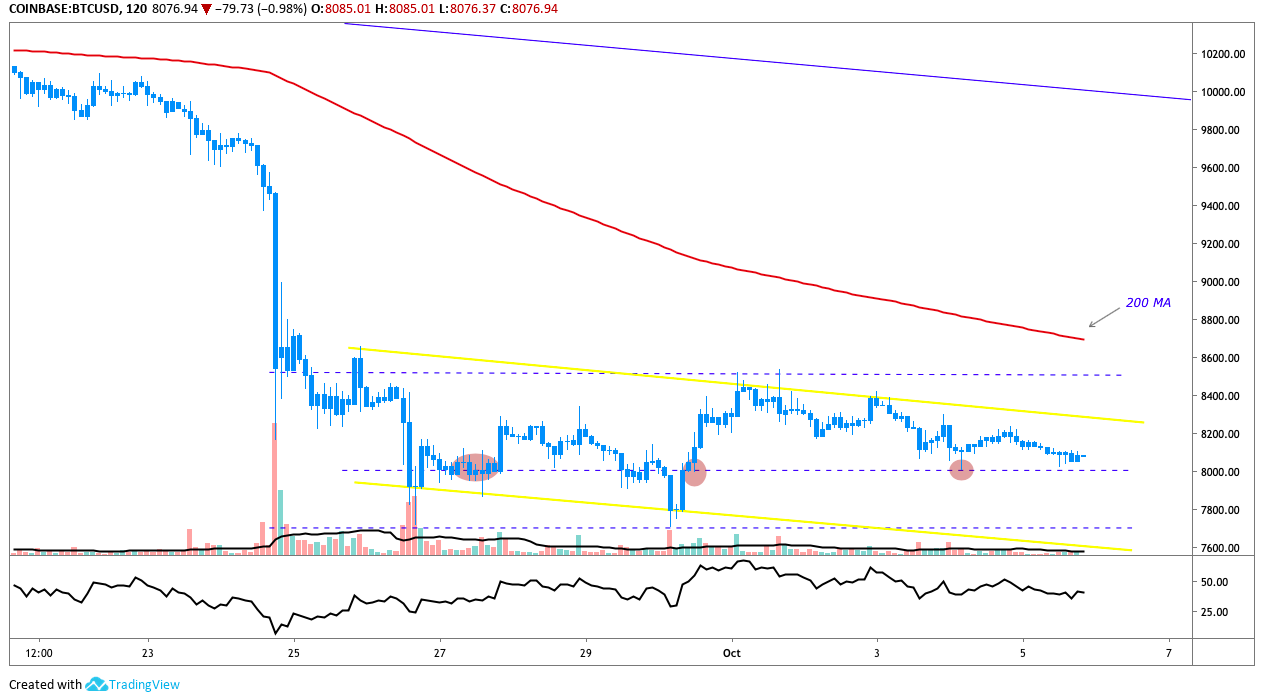 Multiple indicators suggest a move to the downside and bulls will need to push Bitcoin price to a close above $8,200 as soon as possible or a retest of the local bottom at $7,800 is possible. Earlier this week Bitcoin bounced from this point twice. The third visit to $7,800 could see a drop below $7,800 and nearer to the 50% Fibonacci Retracement level at $7,500. 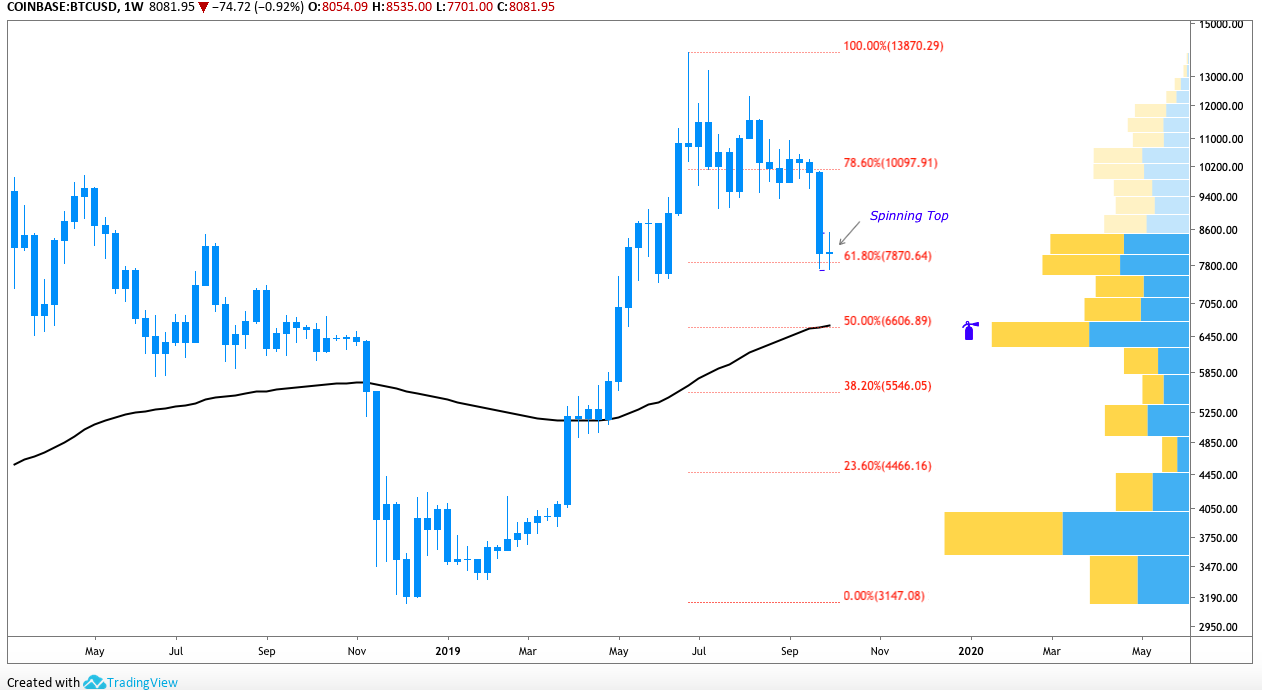 As shown by the spinning top candlestick on the weekly timeframe, Bitcoin remains in a stalemate between bearish and bullish outcomes. Note that the 111 day exponential moving average (EMA) is aligned with the 50% Fibonacci retracement level at $6,600 and the volume profile visible range (VPVR) also shows purchasing demand from $6,700 to $6,300.

There’s always the possibility that a surprise $1,000 drop like the one that occurred two weeks ago will occur and Bitcoin will bounce from this point and find support. 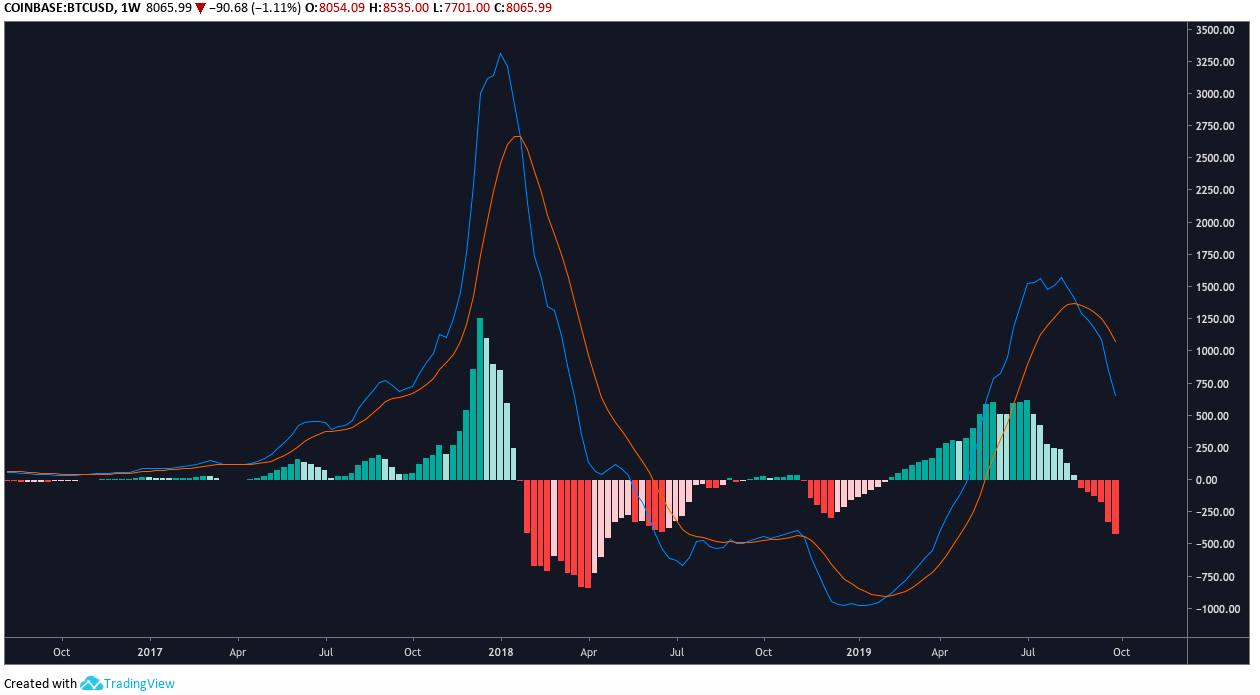 The weekly moving average confluence divergence and the Stochastic RSI remain bearish while the daily MACD is somewhat indecisive. As has been pointed out by nearly every analyst over the past two months, the MACD crossed below the signal line on Aug. 19, a first since Feb. 4. 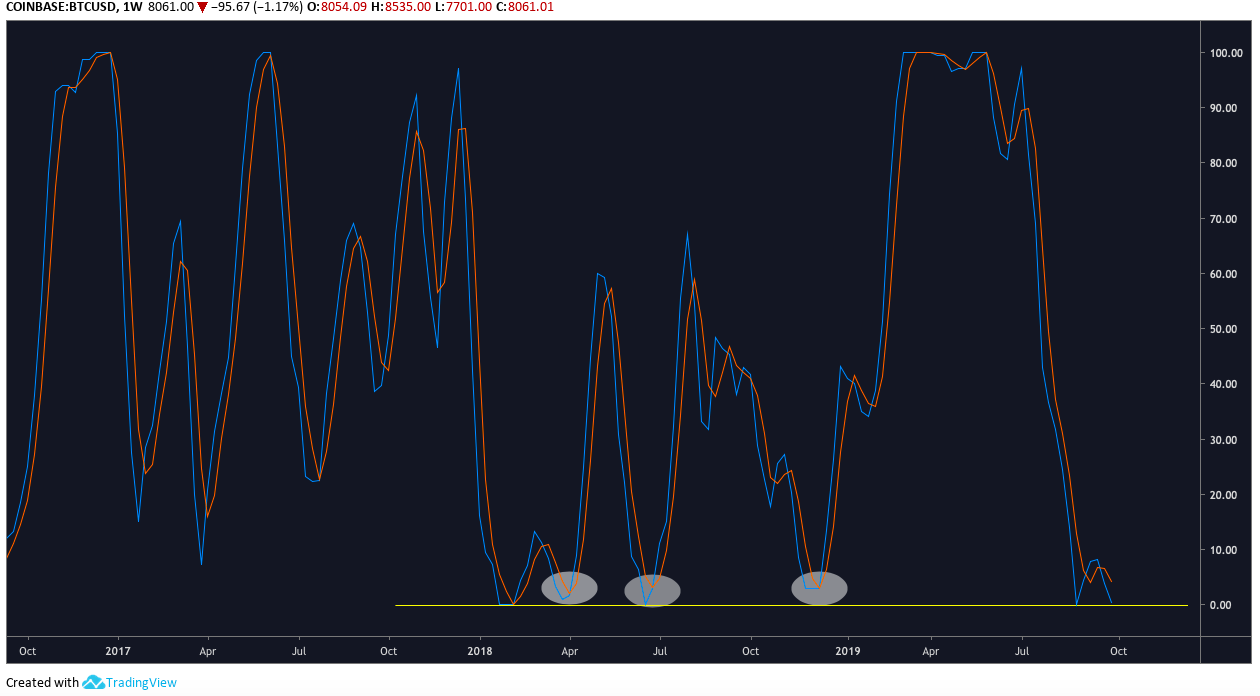 While the MACD is an indicator that lags behind an asset’s price action, the Stoch does not and it currently rests at 0. Looking back to months prior, one can infer that a change in direction is due.

One will also recall that narrowing the Bollinger Bands, a tightening trading range, and a steady decline in volume typically precede an explosive move from Bitcoin. If only we had a crystal ball to determine which direction the asset will take!

Assuming Bitcoin can break above $8,200 and the descending channel trendline at $8,250, a move to the 200-MA at $8,700 could occur. Volume providing, bulls could push the price as far as $9,000 which is where the 20-WMA is located. The MACD histogram on the daily time frame currently shows higher lows and a reduction in selling pressure, whereas the 4-hour histogram has flipped pink. At the time of writing the 1-hr histogram has flipped green and popped above 0.

While this is encouraging, volume remains relatively stagnant and Bitcoin still trades under $8,200 so there’s still a strong chance of rejection at the overhead descending channel trendline.

In situations such as these, savvy traders will remember that volume precedes price, so keeping an eye on this indicator and whether or not Bitcoin crosses above the middle arm of the Bollinger Band indicator might be a tell.

The bearish outlook is pretty much the same as it has been all week. Failure to hold at $7,800 could press Bitcoin price down to $7,500. Falling below this point, $7,300 is where eyebrows will begin to raise.

It seems the majority of traders have taken a bearish bias and expect Bitcoin to drop below $7,800 so taking a look at the order books of your favorite exchange might provide some insight on where hidden support and resistance levels might be.

For example, if many traders have set their stops at $7,600, it’s possible that Bitcoin price will slice through this level and quickly drop to $7,300 or below. With that said, it is the weekend and all throughout 2019 Bitcoin has made volatile moves on weekends so there’s always the possibility of an unexpected move that goes against the consensus of traders. For the time being, all eyes are glued on the weekly close as bulls and bears expect Bitcoin to make a decisive move over the next 48-hours.

Bitcoin needs to close above $8,200 this weekend or bears could seize the opportunity to push BTC price back below $7,800