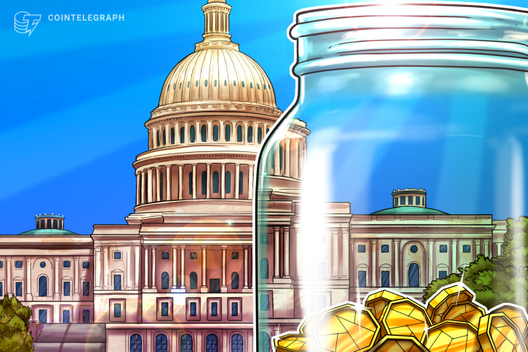 A young Congressional candidate in the U.S. is accepting crypto donations in her bid to unseat Nancy Pelosi

A candidate for the United States House of Representatives in 2020 is accepting cryptocurrency donations to run against Representative and Speaker of the House Nancy Pelosi.

Agatha Bacelar, a Stanford engineer and designer who served with Emerson Collective and Democracy Earth argues that the existing political establishment wants to hold back a future “where economic freedom is afforded to all,” according to the campaign’s website.

The challenger is accepting donations in five cryptocurrencies including Bitcoin (BTC), Ether (ETH), Bitcoin Cash (BCH), Litecoin (LTC) and USD Coin (USDC) through Coinbase, one of the most popular U.S.-based crypto exchanges and wallet services.

Bacelar aims to gain the nomination for the Democratic candidate in California’s 12th Congressional district in the primary election on March 3, 2020. So far, her campaign has raised $5,000 out of a $1 million target. Bacelar claims that the $1 million goal is equal to the value of Pelosi’s stock in Facebook.

The engineer’s campaign will face significant challenges, as Rep. Pelosi has represented San Francisco in Congress for 31 years. As Speaker of the House, Pelosi wields significant influence over the American political process and has recently defended an impeachment inquiry into U.S. President Donald Trump. 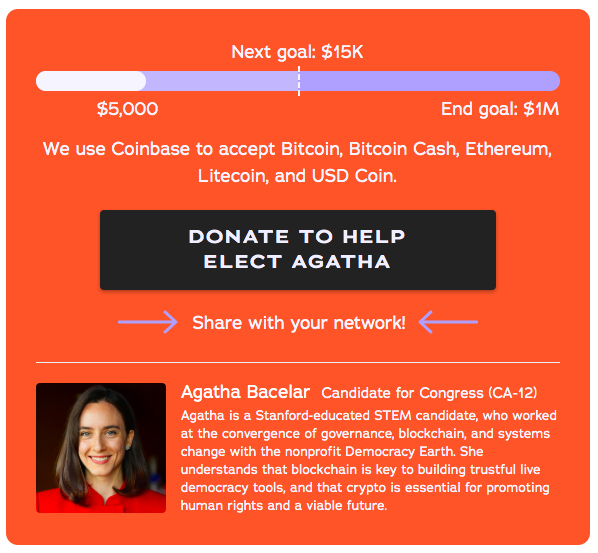 The crypto industry has been dimming in the U.S.

Bacelar criticized the level of tech awareness in the House, arguing that only 3% of representatives have some background in science, technology, engineering and mathematics.

“Blockchain startups no longer incorporate in the U.S., while regulatory inaction and policies favoring big tech companies have allowed monopolies to block out competition that the next web would bring.”

Cryptocurrencies have increasingly made their way into various aspects of the political process in the United States. Candidates for various levels of political office in the country have accepted digital assets to fund their campaigns.

The crypto industry has also formed mechanisms for representation in Washington D.C. In late August, BitPAC, the first-ever Bitcoin-based political action committee announced that it will expand its candidate supporting program with a utility token dubbed Politicoin.

A young Congressional candidate in the U.S. is accepting crypto donations in her bid to unseat Nancy Pelosi