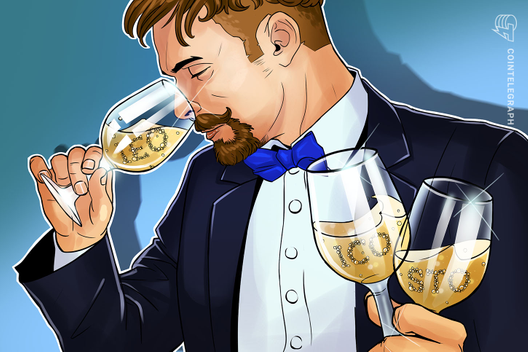 Are IEOs just having their golden period or are they here to stay?

The crypto community has seen a tectonic shift in fundraising trends: from the decline of initial coin offerings (ICOs) to the hype around security token offerings (STOs) and then the rise of initial exchange offerings (IEOs). The inclination for fundraising seems to evolve every year. Similarly, 2019 brought with it a new way for crypto businesses to launch their tokens.

Fundraising is the key to any business to take off. Crowdsourcing trends have taken off globally across all sectors, especially in the decentralized world of cryptos — though the way to crowdsource changes as technology progresses and as society progresses.

Are ICOs a thing of the past?

Back in 2017, ICOs were one of the most popular topics in the cryptosphere. That year alone saw 875 projects raise over $6 billion in funds through ICOs. Even when looking at Google search trends for the popularity of ICOs, it can be seen that it had peaked at the same time Bitcoin’s prices had hit an all-time high (i.e., December 2017-January 2018). 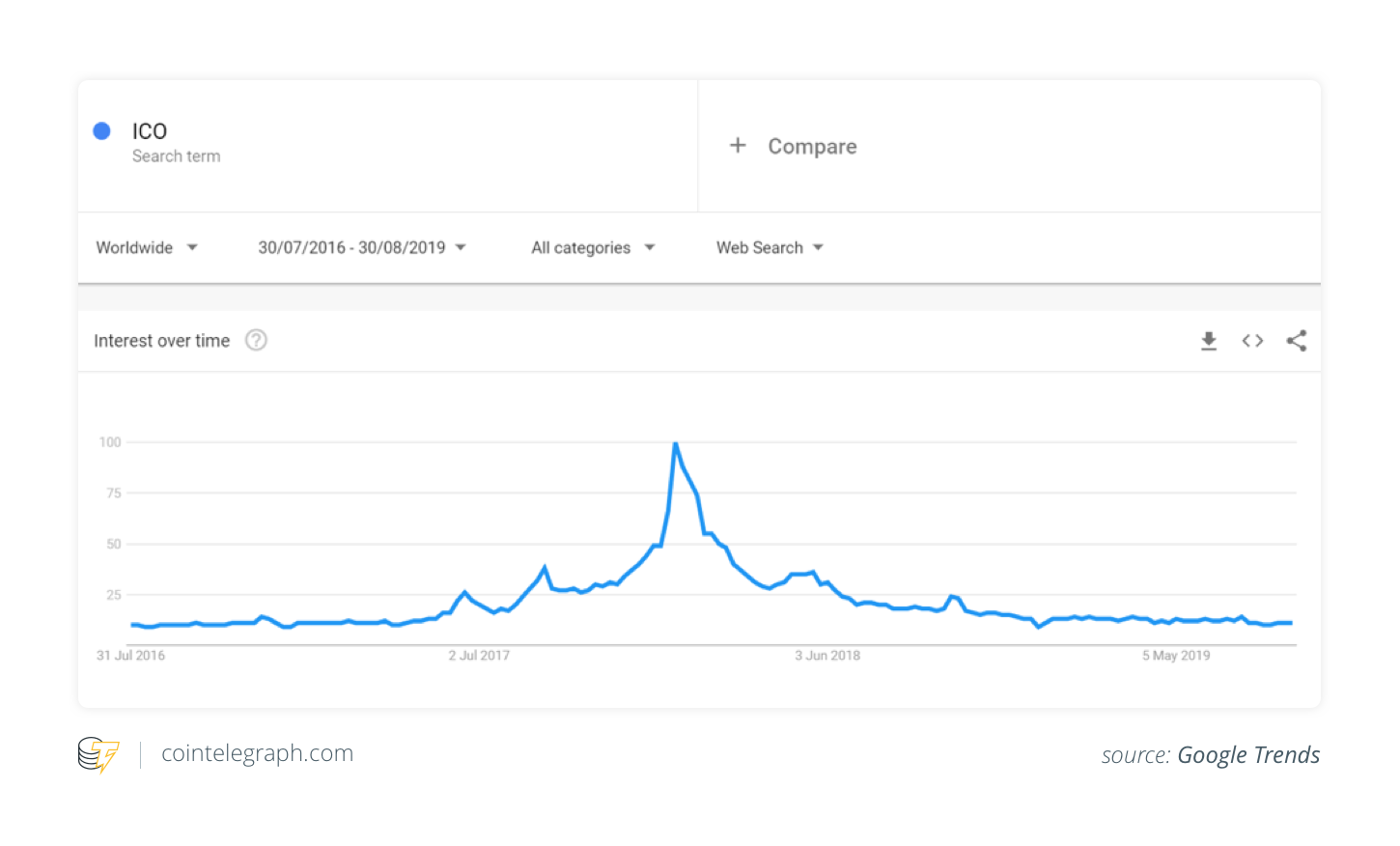 The decline in interest in ICOs began in 2018. Even though the year saw 1253 ICOs raise around $8 billion, the vast majority of the funding came in the first half of the year. Getting into 2019, only 84 projects have managed to raise a total of under $350 Million in the first three-quarters of the year.

However, the narrative that ICOs have become obscure is still overstated. Indeed, $350 million is still a lot of capital in an ecosystem that is in a nascent stage. There have been major ICOs even in 2019. Blockchain firm Algorand raised over $60 million in a token sale this June while Tron Game Global raised about $80 million in its ICO.

Maturity of the ecosystem plays a role

It cannot be overstated how important the collapse of Bitcoin prices from its all-time high was for the industry. ICOs in 2017 and even in 2018 were controlled by greed and speculation to a great extent. Most people were looking at the industry as a get-rich-quick scheme while companies realized that they had the ability to generate hundreds of thousands in funding by just plagiarizing white papers and promising unrealistic returns to their investors.

As one study showed, over 80% of ICOs conducted in 2018 were scams. Now, there are regulations in place and people have been prosecuted for running scams. Not only did this play a role in warning the public about facing the consequences of their actions but also spread awareness about the possibilities for misconduct in the industry.

STOs were supposed to become the next progression of ICOs, but now, most realize the unrealistic requirements to participate in one. Investors must be considered accredited by the United States Securities and Exchange Commission (SEC) to participate in STOs.

So, even though STOs are backed by real assets, the high barrier of entry prevented it from being a viable option for fundraising. In fact, raising capital through an STO is so difficult because of the SEC that it is nearly identical to a traditional initial public offering (IPO). However, STOs are more cost-effective than IPOs.

If 2017 was the year for ICOs, 2019 is the one for IEOs. Triggered by the Binance crypto exchange launching an offering for BitTorrent in January, there have been a plethora of projects going to exchanges that offer the same service.

An IEO is orchestrated by a crypto exchange on behalf of a startup that is seeking to raise funds. In return for their services, the startups have to pay listing fees and a percentage of the tokens sold in the IEO. The relationship between the exchange and the startup thus becomes symbiotic as the exchanges are incentivized to help startups with marketing and promotions.

Ronald Chan, the director of partnership at the exchange ProBit, summed up the rise of IEOs to Cointelegraph in an email conversation. He said:

“First, retail users started to become wary of the many ICOs popping up. Users were looking to established brands in the cryptocurrency industry to vet through the projects before they would participate in token sales. Second, there was a proliferation of crypto exchanges and some exchanges found it profitable to fill this demand of vetting through the projects before token sales.”

In many ways, users are basically outsourcing due diligence to the exchanges, which can better guarantee security and the technology infrastructure than firms can do themselves. The exchange vets the project to ensure it is trustworthy. Another advantage is that the token is listed for trading almost immediately on the exchange.

Related: How Do Crypto Exchanges Select Coins, What Does It Take to Get Listed?

Many believe that IEOs provide a fairer playground to newcomers, both for new investors and startups looking for funds. Nischal Shetty, the CEO of WazirX, which is the biggest crypto exchange in India, thinks that the shift to IEOs is a natural progression. Additionally, he said that one of the biggest advantages that IEOs have is their audience. In a discussion with Cointelegraph, he stated:

“IEOs present a ready audience that understands how crypto works, the good and bad of it. Overall, its a win-win situation for everyone involved.”

However, people in the U.S. cannot take advantage of IEOs yet. IEOs are currently illegal, as tokens are clearly securities and unregulated exchanges are acting as brokers. Global investors, however, have shown that IEOs are the go-to way to fundraise a crypto project. The $1.5 billion raised by IEOs in 2019, without the participation of U.S.-based investors, exemplifies this.

Is the venture capital funding against decentralized philosophy?

Venture capital (VC) funding is somehow left out of contention when it comes to crypto projects. Even when the ICO hype was at its peak, there was venture capital investment coming in. Notably, massive crypto projects like Circle and Coinbase received funding through VCs.

In fact, in 2018 alone, VCs invested close to $3 billion in crypto and blockchain-related projects, which is almost 40% of what was raised by ICOs. It’s important to remember that VCs are seasoned investors and have plenty of experience and data to back their investments, which cannot be said for the average ICO investor.

Related: Biggest Crypto Hedge Funds and What They Tell About the Market

Vijay Anand, an angel investor and CEO of The Startup Center, thinks that the traditional venture capital model of funding is against the philosophy of the entire blockchain and crypto space. In a conversation with Cointelegraph, Anand said:

“A distributed system (talking about cryptocurrency/blockchain), which was always hard to build but was what was desired is within reach. Coincidentally, there are also some very socialistic underpinnings around it. To fund socialistic infrastructure using capitalistic measures seem to be fundamentally flawed thesis. If we can wrap our minds around what distributed systems should look like, and not try to control it, the future will unveil itself much sooner.”

One of the biggest advantages of the blockchain ecosystem is its decentralized nature. Thus, centralized funding should ideally not been sought after by blockchain startups. However, this hasn’t stopped VCs from investing in blockchain firms and from looking for funding with venture capitalists. In fact, on Aug. 6, 2019, crypto lender BlockFi secured $18.3 million in a funding round led by Valar Ventures.

Is IDO the next IEO?

An initial DEX offering (IDO) is similar to an IEO except for the fact that IDOs are conducted on decentralized exchanges (DEX) while IEOs are carried out on centralized ones. A couple of months back, Raven Protocol (RAVEN) conducted an IDO on Binance DEX.

However, DEXs currently have very little traction — to the point that many within the community have questioned the utility of a DEX. Binance DEX itself has a daily trading volume of a little under $2 million. ProBit exchange’s Chan puts this in perspective by saying:

“DEX have not reached maturity yet in terms of numbers of users and order book depths. Successful IEOs require a healthy amount of user base and good engagement with these users to be popular.”

An ICO is just a tool to raise funds. In many ways, the drawbacks of ICOs had given rise to STOs and IEOs. IEOs are just ICOs with a new layer of intervention and regulation that attempts to ensure value and lower risks for participants. STOs, on the other hand, have such a high barrier for entry that they become unviable for most projects.

The decline in interest for ICOs can be attributed to the strengthening of regulations around the market. Additionally, the average investor is now wiser about associated risks and does more due diligence than a couple of years back. Hoverer, IEOs have proved to be an avenue that is the middle way for the libertarian structure of ICOs and the draconian structure of regulation that comes with STOs.

Are IEOs just having their golden period or are they here to stay?