Crypto in Court — Overview of the Biggest Lawsuits Worldwide

Crypto in Court — Overview of the Biggest Lawsuits Worldwide The SEC continues to file lawsuits in the U.S., but banks are on the receiving end of international crypto court cases

Over the last 24 months, all major legal systems have been floundering to develop a regulatory framework that can be applied across the blockchain industry. This lack of a standard foundation has led to the world watching current court cases within the crypto industry with extreme scrutiny, as these will likely provide a precedence to build future regulatory decisions upon.

Cointelegraph has covered many of these cases, with the most (in)famous one being the lawsuit against self-proclaimed Bitcoin creator Craig Wright. But what do all these cases suggest in regard to the overall sentiment toward crypto within the United States court system?

Recent cases in the U.S.

The New York Office of the Attorney General (OAG) is investigating the Bitfinex exchange over allegations of fraud and misleading investors. Prosecutors allege that the exchange and associated stablecoin firm, Tether, covered up an $850 million loss — and in doing so, misled investors. The latest in the case involved Justice Joel M. Cohen, a Supreme Court judge in New York County, who denied a motion to terminate the investigation by Bitfinex and Tether. In response, the companies said that they will appeal the decision.

Software giant Oracle has filed a lawsuit against blockchain startup CryptoOracle, with allegations of trademark infringement and cybersquatting, following publicity of the startup on CNBC. The complaint claims that the startup selected its name in order to trade on Oracle’s reputation. Oracle first attempted to resolve this outside of court with a cease-and-desist letter, but this resulted in the startup filing to trademark CryptoOracle.

Bradley Sostack, an XRP investor, alleges in a class action lawsuit that Ripple misled investors and sold XRP as an unregistered security, in violation of federal law. Sostack’s latest filing was on Aug. 5, with Ripple being required to respond to this suit by mid-September 2019.

The U.S. SEC filed a complaint against Reginald Middleton, Veritaseum Inc. and Veritaseum LLC in relation to a fraudulent and unregistered initial coin offering (ICO). Of the $14.8 million raised, $8 million has recently been frozen by the U.S. Eastern District Court of New York.

In March 2018, traders filed a case claiming Coinbase committed fraud, insider trading and market manipulation in relation to the Bitcoin Cash (BCH) markets. The claims of fraud have since been dismissed by U.S. District Judge Vince Chhabria of the Northern District of California. Should this case continue, traders will need to base claims on a negligence lawsuit.

Founder of ConsenSys-incubated startup Token Foundry, Harrison Hines alleges that his former business partner Joseph Lubin has breached contract and is suing for over $13 million. The documents were filed with the New York Supreme Court, claiming that Lubin has a connection with a breach of contract, conversion, quantum meruit, unjust enrichment, fraud, declaratory judgement and unpaid profits.

The state of New Jersey alleges that Pocketinns, a blockchain-driven online marketplace ecosystem, sold over $400,000 worth of unregistered securities to 217 investors. Poketinns intended to raise as much as $46 million in its token sale held in January 2018.

Operator of the now-defunct Bitcoin exchange BitFunder, Jon Montroll, was accused of obstruction of justice during an investigation of the fake 6,000 BTC hack in 2013. Montroll pleaded guilty and has received a 14-month prison sentence, which is small compared with the 27- to 33-month sentence suggested by the prosecutor.

Kantor was the mastermind behind a cryptocurrency scam related to ATM coin between 2014 and 2017. In the court proceedings, he was found guilty, and was ordered to forfeit and pay over $2 million in addition to receiving an 86-month prison sentence.

The Community, a hacking group aged between 19 and 28, and is made up of five U.S. citizens and one Irish national, has received a 15-count indictment in relation to SIM swapping charges. It is alleged that the fraud resulted in $2.5 million worth of cryptocurrencies being stolen in seven attacks. The charges of conspiracy to commit wire fraud and wire fraud carries a maximum penalty of 20 years in prison each. The Irish man has been extradited to the U.S. to face charges.

The SEC alleges that Pacheco operated a multimillion-dollar cryptocurrency pyramid scheme, Ipro Network, attracting over $26 million from investors from 2017 to 2018. It is further alleged that the defendant misappropriated investors‘ funds with the purchase of a $2.5 million home and a Rolls Royce automobile.

The CFTC claimed that Hunt and Hecroft engaged in a fraudulent scheme to solicit Bitcoin from the public. In June 2019, a U.S. District Court for the Northern District or Texas found the pair guilty and ordered them to pay $400,000 in restitution, including a $180,000 civil monetary penalty each.

The CFTC filed a complaint with the New York Southern District Court against now-defunct United Kingdom-based entity Control-Finance Ltd. in June 2019. According to the file, the company defrauded more than 1,000 investors to launder at least 22,858 Bitcoin with a value of over $230 million, as of Aug 2019.

This lawsuit sits with the U.S. District Court for the Southern District of New York and alleges that Longfin, a financial services company, committed fraud through fabricated revenue numbers in order to secure a spot on the Nasdaq. This is part of an ongoing lawsuit against Longfin that has already seen $27 million frozen by the SEC over securities fraud and insider trading.

Operator of the now-defunct Bitcoin exchange BitFunder, Jon Montroll, was accused of obstruction of justice during an investigation of the fake 6,000 BTC hack in 2013. Montroll pleaded guilty and has received a 14 month prison sentence, which is small compared with the 27 to 33 month sentence suggested by the prosecutor. The case concluded in July, 2019.

In March 2018, the U.S. FTC placed a freeze on the Bitcoin Funding Team’s funds and stopped its activities through a court order due to misleading marketing practices. Through a chain referral scheme, the four individuals behind this team and the My7Network had developed a pyramid scheme according to the FTC. In August 2019, the FTC announced it settled the charges against the individuals, adding up to just under $1 million.

The majority of court cases appear to be in relation to fraud and cases being brought forth by U.S. authorities or by individuals. In addition to the ones mentioned above, many cases tend to reach settlement prior to becoming public or hitting court due to concerns about a lack of precedence. Since this industry is so new, it is difficult for both prosecutors and defendants to predict the overall direction proceedings will take.

Partner at Devoise and Plimpton Law firm, Byungkwon Lim believes that the courts have yet to face some of the more complicated ordeals that will surface with the cryptocurrency industry, as some digital assets change their designation amid ongoing developments. He told Cointelegraph:

“I am not sure if I have ever seen any traditional asset or instrument that goes through this type of transformation. I don’t know how courts will do about this type of issue. I think there are a lot of issues like this that are unique to blockchain and crypto asset — a legal liability of an open source chain, the legal treatment of miners, validators or others who keep the network securely operating, and so on.”

Gunton pleaded guilty to supplying online personal data and hacking services for cryptocurrency. The discovery was by chance during an unrelated routine visit to Gunton’s home due to a Sexual Harm Prevention Order imposed by the court for previous offenses. Gunton was sentenced to 20 months in prison and ordered to repay almost $500,000.

India’s Supreme Court openly criticized the RBI’s handling of a cryptocurrency business ban in July 2018. In the most recent session, the court ordered the RBI to respond within two weeks. This case runs throughout a rough period for India while the Indian government considers a blanket law making cryptocurrencies illegal for all Indians.

The Supreme Court of Israel has ruled against the Leumi bank’s block on cryptocurrency exchange Bits of Gold’s account. The block was based on grounds of regulatory concerns. This is the latest in a back-and-forth exchange between the two parties in the Israeli Supreme Court.

Santander was sued by Brazilian exchange Mercado Bitcoin in 2018 as a result of the exchange’s accounts being closed and locked. Since then, the Spanish bank appealed the decision but has since had the appeal denied, and thus reconfirming the previous ruling to return the funds and pay the fine.

It is clear that many international cases appear to be ruled in favour of cryptocurrency parties and enterprises. Many cases see disputes between crypto-related companies and banks, but the traditional and solid foundation of the banks does not wave the courts’ focus on justice.

Lawyers have a say

Overall, it seems like the framework of the new technology is at the core of the problem the courts are facing when they become involved in cases related to cryptocurrencies and blockchain. Lim further clarified:

“From a high level perspective, as many have pointed out, one significant issue is whether the existing legal framework can adequately regulate or address a business model or process built on the blockchain technology. Perhaps that may never be feasible, given that Satoshi put together blockchain to eliminate social costs from a centralized system. The existing legal framework has developed around a central authority. If miners vote to modify the source code of a chain and, as a result, users of the chain suffer a loss, it’s not clear what those users can do.”

Also it seems like states and authorities are expanding their efforts to understand and define the new industry. But as Lim says, this is a catch up game for them:

“In my experience in working with various regulators, many of them do dedicate significant resources to study the technology and industry. They inevitably have to do a lot of catch-up, but many of them are quite versed in the space.”

Marc Boiron, a partner at FisherBroyle, holds the view that supporters of cryptocurrency will face an uphill battle in these first few years, until the wider public and media retain a better understanding and thus a less-biased view of the technology:

“With time, as judges and jurors learn more about cryptocurrencies from an economic and technological perspective, I’d expect to see a shift towards a more neutral view. Until then, it is important for anyone dealing in cryptocurrency-related litigation to work with attorneys who can educate judges throughout the litigation.” 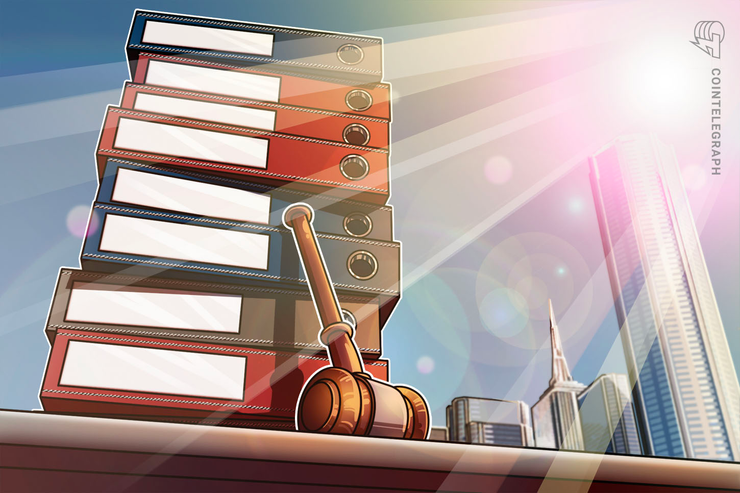 The SEC continues to file lawsuits in the U.S., but banks are on the receiving end of international crypto court cases