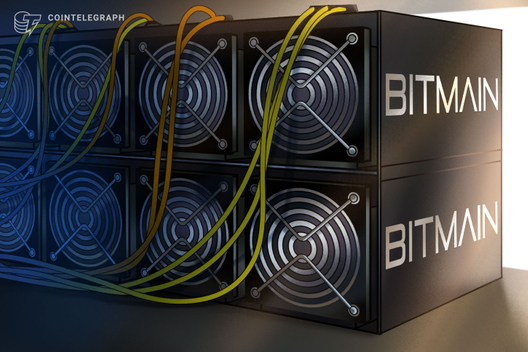 Bitmain goes all out with giant 600,000 chip order

Bitcoin (BTC) mining giant Bitmain will increase its capacity by 50% in the next six months on the back of a giant hardware order, a source close to the deal has said.

As reported by Chinese social media network WeChat on Aug. 23, Bitmain, which has seen a dramatic reversal of fortunes in 2019, will now buy 600,000 mining chips.

According to a source close to the Taiwanese chip manufacturer processing the order, the chips will be of the most recent 7nm variety, the hash rate of which will be 50 tera hashes per second.

“Based on this calculation, after half a year, Bitmain’s total network computing power will skyrocket by about 50%,” the publication notes, adding Bitmain’s valuation will subsequently top $12 billion.

Mining operators trickle into the black

As Cointelegraph reported, the increase in Bitcoin mining profitability this year has improved the prospects for operators like Bitmain. In late 2018, pressure was visible, with the company closing down operations and firing staff in some countries.

The impact of the previous Bitcoin bear market lingers on, Bitmain reporting losses of $625 million for January and February.

Renewed plans to conduct an initial public offerings — or IPO — in the United States could meanwhile come to fruition before the beginning of 2020. Bitmain goes all out with giant 600,000 chip order