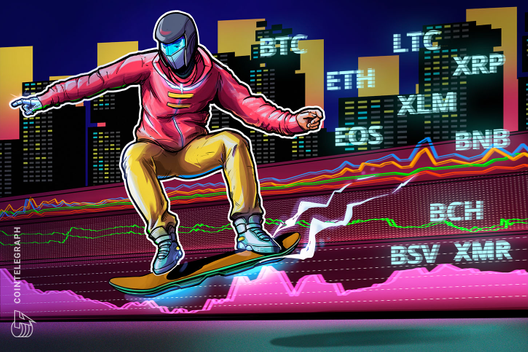 What are the key levels to watch out for in Bitcoin? Let’s consult the charts

Crypto markets are under pressure as the total market capitalization has dipped close to $260 billion. United States Secretary of State Mike Pompeo believes that Bitcoin should be regulated similar to other financial transactions because the ability to do anonymous transactions with it can be used for financing terrorism. This shows the myopic vision of governments regarding cryptocurrencies.

The institutions, however, are scooping up Bitcoin. Nelson Minier, head of over-the-counter (OTC) trading at major cryptocurrency platform Kraken, said that there is a 20 fold increase in OTC transactions since 2018, which is a bullish sign. Morgan Creek Digital Assets co-founder Anthony Pompliano expects Bitcoin to make its way into every institutional investor’s portfolio.

In the past few days, many analysts have highlighted that Bitcoin will act as a safe haven in case of a crisis. However, Spencer Bogart, a general partner at Blockchain Capital, believes that Bitcoin will do well during monetary devaluation, but will struggle to perform during a liquidity crunch.  Should traders buy the current dip in Bitcoin and other altcoins or wait for lower levels? Let’s analyze the charts.

Bitcoin (BTC) has turned down from the moving averages, which are located close to each other and have flattened out. The RSI has again dipped back into the negative zone. This shows a balance between buyers and sellers.

If the consolidation has to continue, bulls will have to defend the critical support at $9,080 because if this support breaks down, the BTC/USD pair can plummet to $7,451.63. A breakdown will catch many aggressive bulls off guard and will dent sentiment.

Conversely, if the pair rebounds sharply from $9,080, it can be a good buying opportunity as it will offer an attractive risk-to-reward ratio. We suggest traders wait for the price to rebound sharply from $9,080 before entering a long position. The trade can be protected with a stop loss at $8,900.  However, if the rebound is weak, long positions should be avoided because it shows a lack of buying interest, which might eventually result in a breakdown to lower levels. We should see a decisive move within the next few days.

Ether (ETH) turned down from the 20-day EMA on Aug. 20, which is a negative sign. The bears will now try to break below $174.461, the intraday low on Aug. 15. If this support is violated, the downtrend will resume and the cryptocurrency can plummet to $150.

The downsloping moving averages and the RSI in the negative zone show that bears have the upper hand. Our bearish view will be invalidated if the ETH/USD pair rebounds from $174.461 and rallies above $204. The next level to watch on the upside will be $235.70. We will wait for the trend to turn up and the price to sustain above the 20-day EMA before proposing a trade in it.

The pullback in XRP stalled at the 20-day EMA. This shows that traders are using relief rallies to lighten up their positions. The price is likely to retest the $0.225-$0.24508 support zone. If bears succeed in breaking below the zone, the downtrend will resume and the next target to watch on the downside will be $0.19. With both moving averages sloping down and the RSI close to the oversold zone, advantage is clearly with bears.

Contrary to our assumption, if bulls defend the support zone, the XRP/USD pair might again attempt to ascend the 20-day EMA. If the price sustains above the 20-day EMA, it will be a sign that the current breakdown was a bear trap. Such a move might offer an excellent long-term buying opportunity with an attractive risk-to-reward ratio. Until then, we remain neutral on the cryptocurrency.

Bitcoin Cash (BCH) has turned down from the 20-day EMA. This is a bearish sign. It has a minor support at the trendline of the ascending channel, below which it will retest the neckline of the head and shoulders (H&S) pattern.

A breakdown and close (UTC time) below the neckline will complete the H&S pattern, which is a huge negative. The first support on the downside is at $166.98, but if it fails to hold, the drop can extend to $105. The downsloping moving averages and RSI in the negative zone suggest that bears have the upper hand.

Our bearish view will be negated if the BCH/USD pair rebounds off the neckline. We will turn positive if the price sustains above $360. Until then, we suggest traders remain on the sidelines.

In a strong downtrend, the pullbacks do not even reach the 20-day EMA. That is what happened in Litecoin (LTC) as the rebound from the 61.8% Fibonacci retracement level fizzled out well before reaching the 20-day EMA.

The LTC/USD pair is likely to breakdown of $69.9227 and drop to the next support at $58. If this support also breaks down, a decline to $49.3305 will be in the cards. The downtrending moving averages and RSI close to the oversold zone suggest that the bears are in command.

Our bearish view will be invalidated if bulls defend $69.9227 and propel the pair back above the 20-day EMA. We suggest traders wait for the decline to end and a new buy setup to form before entering any fresh positions.

Binance Coin (BNB) has again turned down from the 50-day SMA. This is the third such occasion in the past few days when bulls have failed to scale above the 50-day SMA, which is a bearish sign. The price can now dip to the strong support of $26.202. If this level breaks down, a fall to $24.1709 is probable.

The BNB/USD pair has been among the strongest altcoins. Any sustained weakness in it will indicate that even the strong bastions are crumbling. A break below $24.1709 will start a downtrend that can result in a fall to $18.30.

Conversely, if bulls defend $26.202 or $24.1709, it can remain range-bound for a few more days. We will wait for the price to sustain above the 50-day SMA before recommending a long position in it.

The bounce off the strong support of $3.30 fizzled out at $3.8013 on Aug. 19. This is a bearish sign because it shows that buyers are unwilling to pay higher prices to buy EOS. If the price breaks down of $3.30, all the traders who bought during the recent dip to $3.30 will be under loss.

As the loss deepens, they might be forced to close their positions. The next support below $3.30 is $2.69 and below that $2.18. The downtrending moving averages and RSI close to the oversold zone indicate that bears are in the driver’s seat.

Our bearish view will be invalidated if aggressive bulls again buy closer to $3.30. If the next rebound is strong, the EOS/USD pair might attempt to break out of the 20-day EMA once again. The pair has not closed (UTC time) above the 20-day EMA since breaking below it on June 26. If the price sustains above the 20-day EMA, it will signal that buyers are back in the game. Until then, we suggest traders remain on the sidelines.

The bulls are struggling to push Bitcoin SV (BSV) higher. Though it closed above the 20-day EMA on Aug. 19, it quickly reversed direction on the next day. This suggests a lack of conviction among buyers. Both moving averages are sloping down marginally and the RSI is in the negative zone, which shows that bears have a slight advantage.

Nonetheless, if bulls defend $107, we might see a recovery attempt, which will face resistance at the moving averages. Traders should wait for a buy setup to form before establishing fresh long positions in it.

It is difficult to predict the movement inside a range. Though Monero (XMR) broke out of the moving averages, it failed to reach $98.2939. It turned down from $90.95 and is on its way to the next support at $72.

If $72 cracks, it will signal a deeper correction to $60 and if this level also fails to hold, the decline can extend to $50. However, if $72 holds, the XMR/USD pair will move up to the moving averages and above it to $98.2939. We might suggest long positions on a strong bounce off $72, but if this level breaks, traders should wait on the sidelines.

The bulls failed to push Stellar (XLM) back above $0.072545, which is a bearish sign. It indicates a lack of demand even at the yearly lows. The bears will now try to resume the downtrend. Both moving averages are trending down and the RSI is close to the oversold zone, which confirms that the path of least resistance is to the downside. The next target to watch is $0.05.

When the trend turns down, many times, the price drops to illogical levels as fear grips traders and they dump their positions when they can not bear the pain anymore. Hence, it is best to avoid buying in a downtrend until a bottom is in.

Another possible buy signal is when a breakdown fails to gather momentum and quickly reverses direction. If the XLM/USD pair turns around from current levels and scales above both moving averages, it will signal a likely change in trend.

What are the key levels to watch out for in Bitcoin? Let’s consult the charts