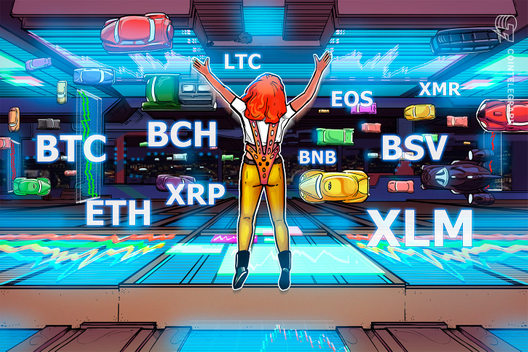 Has Bitcoin topped out in the short term or will traders have the opportunity to buy it lower? Let’s consult the charts

Nicholas Colas, co-founder of DataTrek Research, believes that the performance of Bitcoin in the past few days shows that it is working like a geopolitical turmoil indicator. He points out that Bitcoin predicted Hong Kong protests and some capital flight out of Hong Kong and China.

Both in Argentina and Hong Kong, investors paid a premium for Bitcoin to protect their capital during periods of crisis, but as trade war tensions between the United States and China abated, Bitcoin prices cooled off. However, Murad Mahmudov, chief information officer at cryptocurrency hedge fund Adaptive Capital, believes that investors should think big. He expects Bitcoin to hit $100,000 in the future.

Bitcoin did not react to the SEC’s decision of postponing its ruling on three Bitcoin exchange-traded fund proposals, which shows that crypto markets have matured. Is the current weakness in the crypto space a buying opportunity? Let’s find out.

Bitcoin (BTC) has dipped back below the downtrend line and the moving averages. This has triggered our recommended stop loss on the long position. The failure of bulls to build up on the gains following a breakout of the downtrend line is a bearish sign as it shows profit booking at higher levels. With no major support in sight, a drop to the critical support of $9,080 looks likely.

The support at $9,080 has held twice earlier, hence, we anticipate bulls to defend it once again. A bounce from the support will face resistance at the downtrend line and the moving averages. We expect the BTC/USD pair to pick up momentum above $12,000.

On the other hand, if the pair breaks down of $9,080, it will become weak and can drop to $7,451.63. Considering the weakness in the short term, we suggest traders wait before buying again.

Ether (ETH) turned down from the uptrend line on Aug. 12, which is a bearish sign. The failure of bulls to push the price above the uptrend line and the 20-day EMA shows a lack of buyers at higher levels.

The bears will now try to sink the ETH/USD pair below the critical support of $192.945. If this support breaks down, the next stop is at $164, but if that support also gives way, the decline can extend to $150. Both moving averages are trending down and the RSI has dipped into the negative zone, which shows that bears have the upper hand.

Our bearish view will be negated if the pair bounces sharply from $192.945. A breakout of the 20-day EMA will increase the probability of a range bound action with resistance at $235.70. We will wait for the price to break out and sustain above $235.70 before recommending a trade in it.

XRP is again correcting toward the critical support of $0.27795. Repeated retests of a support level weaken it. Both moving averages are sloping down and the RSI is in negative territory, which shows that bears are in command. If $0.27795 cracks and the price sustains below it for three days, it will signal the start of a new downtrend. The next support to watch on the downside is $0.19.

Our assumption will be invalidated if the XRP/USD pair bounces sharply from $0.27795 and rises above the 20-day EMA. If the price sustains above the 20-day EMA, it will attempt to move up to the 50-day SMA. A breakout of $0.34229 will increase the probability of a move to $0.45. We suggest traders wait for the digital currency to show signs of a revival before attempting to buy it. Until then, it is best to remain on the sidelines.

Bitcoin Cash (BCH) broke above the overhead resistance of $345.80, but it turned down from the 50-day SMA. A failure to scale the 50-day SMA has attracted selling that has dragged the price back below the 20-day EMA. The next drop towards $300 is likely to break it and challenge the neckline of the head and shoulders pattern.

Conversely, if the BCH/USD pair bounces off current levels and breaks above the 50-day SMA, it can move up to $428.54. Above this level, the rally can extend to $500. Therefore, we suggest traders keep the stop loss on the long position at $300. We will raise this in the next analysis because the 20-day EMA is flat and the RSI is just below 50, which suggests a balance between buyers and sellers. Let’s reduce the risk when sentiment across the asset class is not very positive.

Litecoin (LTC) has plummeted below the immediate support of $83.65 and is now threatening to break below the support at $76.7143. Both moving averages are sloping down and the RSI is in negative territory, which shows that bears are firmly in the driver’s seat.

Binance Coin (BNB) has broken down of the 20-day EMA, which is a bearish sign. There is a minor support at the trendline, below which a drop to $24.1709 is possible. The flattish moving averages and the RSI just below 50 indicate a consolidation in the short term.

The support is at $24.1709 and resistance is at $32.50. A consolidation in this range would be a positive sign. If the BNB/USD pair stays in a range for a long time and then breaks out of it, the probability of a new high increases. On the contrary, if the pair breaks down of the range, it can slip to $18.30. As the sentiment has turned bearish, we have withdrawn the buy recommended in an earlier analysis.

After being stuck between the 20-day EMA and $3.8723 for the past few days, EOS has now broken down of the support. This shows a lack of demand even at these levels, which is a bearish sign. The downtrending moving averages and the RSI in the negative zone suggest that bears have the advantage.

If the price does not bounce above the 20-day EMA soon, the next support at $3.30 might also break down. Conversely, if bulls defend $3.30 and push the price above the 20-day EMA, the EOS/USD pair can rise to $4.8719. A breakout of this level can start a recovery that can carry the price to $6. Hence, we might suggest a long position if the price sustains above $4.8719. Until then, we remain neutral on the pair.

On the other hand, if the BSV/USD pair breaks below $136.89, it can drop to $107. This is an important level to watch because if this breaks down, the next support is at $85.338. The 20-day EMA is flattening out and the RSI is just below 50, which points to a consolidation in the near term. We will wait for a new reliable buy setup to form before suggesting a trade in it.

Monero (XMR) has broken down of the moving averages and the support line of the ascending channel. This is a negative sign. Both moving averages have started to turn down and the RSI has dipped below 50, which shows that bears have a slight advantage in the short term.

A breakdown of the channel can drag the price to $77 and below it to $72. Therefore, traders can keep the stop loss on the long position at $77. We are not recommending a closer stop loss, because sometimes the price falls only to collect all the existing stops before turning back up.

If bulls can force a turnaround from current levels and propel the price above the moving averages, the XMR/USD pair will make another attempt to break above the overhead resistance of $98.2939. Above this level, we expect the recovery to pick up momentum.

The bulls are trying to keep Stellar (XLM) inside the range while bears are attempting to start a new downtrend. The downtrending moving averages and RSI in negative territory show that the bears have the upper hand. They will now try to sink the price to new yearly lows. If successful, the fall can extend to $0.05.

Our negative view will be invalidated if bulls defend the yearly low and propel the price back above the 20-day EMA. That will be the first indication of a trend change. If the XLM/USD pair sustains above the 50-day SMA, it will increase the probability of a rise to $0.145. That will offer an attractive risk-to-reward ratio. Hence, we might suggest a long position on a breakout of the 50-day SMA.

Has Bitcoin topped out in the short term or will traders have the opportunity to buy it lower? Let’s consult the charts