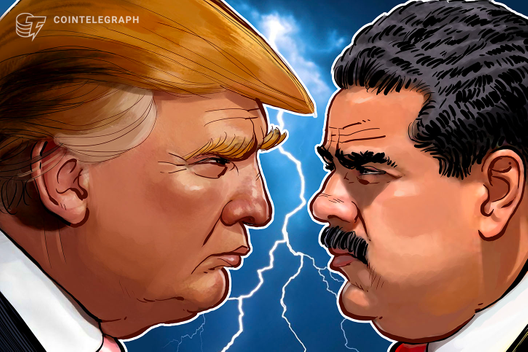 The United States’ hawkish move has been reflected in a new all-time-high for peer-to-peer trading volume on LocalBitcoins in the country.

Trump takes on the ‘usurper’

As the Associated Press (AP) reported on August 5, the U.S. administration’s action took immediate effect this Monday, with President Trump citing Maduro’s ongoing “usurpation” of power — as well as human rights abuses by his supporters — as the grounds for the decision.

Even ahead of yesterday’s strident move, Venezuela has been weathering ruinous economic turmoil sparked by its political crisis. Multiple countries —  including the U.S. — consider Maduro’s last election victory to have been fraudulent and support Venezuela’s opposition leader and self-declared interim president Juan Guaido’s attempts to dislodge him from power.

While the administration’s decision has stopped short of a full trade embargo, the restrictions resemble the U.S.’ actions against staunch opponents such as Cuba, Syria, Iran and North Korea, as AP reports.

Trump’s executive order prohibits U.S. citizens from engaging in transactions with any Maduro or government supporters and also prohibits the latter from travelling to the U.S.

The order excludes most private sector transactions as well as the delivery of essential humanitarian aid. Previous sanctions had targeted Venezuela’s oil industry as well as high-level government insiders.

Amid the stand-off, Trump’s national security adviser John Bolton and Commerce Secretary Wilbur Ross will notably today represent the U.S. at the International Conference for Democracy in Venezuela, hosted in the Peruvian capital, Lima.

At this unprecedented fraught moment in U.S.-Venezuelan relations, weekly trading volume for Bitcoin (BTC) against the Venezuelan Bolivar on peer-to-peer site localbitcoins.com has posted a new all-time high, as Coin Dance data reveals.

Weekly volume for Bitcoin against the Venezuelan Bolivar. Source: coin.dance

As reported, massive hyperinflation and the presidential stalemate in Venezuela this February had already brought Bitcoin volumes in the country to unprecedented levels: a new erstwhile record was set earlier this month as the bolivar’s inflation hit 10,000,000%.

As reported this January, Venezuela has railed against U.S. sanctions, including those levied specifically against transactions in the country’s state-issued, oil-backed digital currency, the Petro. In March, President Trump banned US citizens from buying Petro tokens.

This July, the non-profit American Foundation for Defense of Democracies (FDD)  warned that state-based alternative cryptocurrencies based on major commodities such as oil could make sanctions much more difficult to enforce.