On July 30, the United States Committee on Banking, Housing and Urban Affairs hosted a hearing on cryptocurrencies in a regulatory context. Lawmakers are showing renewed interest in digital currencies against the backdrop of Facebook’s crypto odyssey: This week’s testimony followed two Libra-focused hearings, which were held in Congress earlier in the month.

Indeed, while the recent session’s scope was meant to be broader, Libra remained one of the key topics. The main consensus was that the influx of cryptocurrencies and blockchain is inevitable and that the U.S. would prefer to be a leader in this sector. Here are the main takeaways from the latest Senate hearing.

The recent “Examining Regulatory Frameworks for Digital Currencies and Blockchain” hearing had three witnesses: Jeremy Allaire, co-founder and CEO of payments company Circle, who represented the Blockchain Association; Rebecca M. Nelson, a specialist in international trade and finance at a congressional think tank, the Congressional Research Service; and a law professor Mehrsa Baradaran from the Irvine School of Law at the University of California.

Allaire, being a crucial industry player, advocated for positive regulations, while Baradaran — who has a history of criticizing Bitcoin and engaging with its community — stressed some of cryptocurrencies’ shortcomings. Nelson, on the other hand, did not take sides, instead providing the Senate with factual information regarding the state of crypto regulation across the world. Thus, the lineup seems to have ensured an overall balanced, informative discussion. Perhaps it was the calmer tone that allowed the Senate to finish the session in just 1 1/2 hours, compared to the more than two-hour-long discussions on Libra.

In his opening statement, Sen. Mike Crapo from Idaho admitted that the crypto space is emerging, and it is important for the U.S. to be at the forefront of that innovation. The senator said:

“It seems to me that digital technology innovations are inevitable, could be beneficial, and I believe that the U.S. should lead in developing these innovations and what the rules of the road should be.”

Interestingly, during one of his questions to Allaire, Crapo also suggested that it would be impossible for the U.S. to ban cryptocurrencies even if it wanted to, saying:

Allaire asked for a regulatory framework

The Circle CEO’s testimony stressed the necessity for the U.S. to adopt clear regulations for cryptocurrencies and around the custody of assets in particular. Otherwise, industry actors will have to migrate to other jurisdictions, Allaire continued. “The increase in proliferation of digital asset projects outside the U.S., the movement of companies to leave the U.S. and projects to get started outside the U.S. is definitely getting people’s attention,” the Circle head said in a post-hearing interview with Bloomberg, adding:

Notably, Allaire seems to be experiencing those issues first-hand: Earlier this month, his crypto company launched a new subsidiary in Bermuda in order to serve non-American customers of Poloniex, a cryptocurrency exchange owned by Circle. Consequently, many new services, like advanced trading products and new crypto asset listings, won’t be available to U.S. consumers.

Crapo brought up Circle’s expansion to Bermuda while interviewing Allaire at the hearing. The company’s CEO responded by saying that the Securities and Exchange Commission (SEC) has provided limited guidance on what does not constitute securities. He clarified:

“There is a fundamental mismatch between the regulatory structure and guidance that we have here in the U.S. and the nature of these digital assets. Markets around the world are adopting these, not just Bermuda but Singapore, Switzerland, even jurisdictions like France introducing tailor proposed definition of digital assets so that issuers can feel comfortable.”

Further, at some point during the hearing, Sen. Jon Tester from Montana asked Nelson from the Congressional Research Service, “Do you agree that cryptocurrencies are leaving the U.S.?” to which she confirmed: “It’s certain that other jurisdictions are ahead of the United States to become cryptocurrency hubs.” William McCormick, founder of blockchain consultancy firm Pure Knot, told Cointelegraph regarding this:

“It is clear that the Senate is realizing that cryptocurrencies are truly global money that they cannot throw a net around, lest Asian countries take an insurmountable lead in innovating with digital assets. The US is falling behind the rest of the world in terms of regulatory clarity and this led to blockchain startups moving out of the US, evident by Circle moving to Bermuda recently to set up their exchange HQ.

Later, Crapo asked Nelson to provide specific examples of jurisdictions that are accommodating to cryptocurrencies. The congressional researcher brought up Switzerland to illustrate her point, noting that it manages to police money laundering — another major concern for the Congress — despite having somewhat relaxed regulations in place.

Another point was raised by Sen. Christopher J. Van Hollen of Maryland as he talked about real-time transactions: “Our failure to have moved forward with this technology as so many countries have already done is costing millions of Americans billions of dollars every day.”

However, Sen. Sherrod Brown of Ohio implied that new regulatory rules for cryptocurrencies are not necessary. In his view, digital assets represent a mere financial instrument, just with new technology backing them, asking, “If there aren’t really new products, why would we need rules and regulations?” Baradaran added that she sees similarities in the resistance of tech companies to regulation in the same way that large banks are resistant to them. However, some industry experts, like Jenny Shaver, who is the chief operating officer at crypto-backed loans company Salt, would beg to differ. She told Cointelegraph, “Crypto and digital currencies are evolving globally and it’s crucial we update the century old laws that apply to fiat, and not apply them to digital assets which is a new asset class.”

Bringing up the 2007-08 financial crisis

Continuing his thoughts about regulations, Brown highlighted the danger of weak regulations by asking what lessons can be applied to tech companies after the 2007-08 financial crash, which was led by banking behemoths. Baradaran agreed, noting that there is a fear that the U.S. will lose its technological edge if it doesn’t let these companies grow unburdened. Notably, the law professor also referenced the 2007-08 financial collapse during her statement. Thus, in her opinion, it’s natural that people have embraced Bitcoin in the aftermath of a financial shock, saying:

“Is it any wonder that, as so many people lost trust in the system, they enthusiastically embraced Bitcoin, a new alternative, non-sovereign currency introduced on the heels of the crisis to respond to the financial system?”

Baradaran and senators argued over financial inclusivity in crypto

Following on from the ideas in her prepublished testimony, Baradaran, who specializes in financial inclusivity, argued that the current problems in the U.S. economy are issues of policy, not of technology — so blockchain (despite being an “amazing” development, as she claimed) is not necessarily the answer. According to Baradaran, there is already a public ledger in place — it’s called the Federal Reserve.

When Sen. Catherine Marie Cortez Masto of Nevada asked Baradaran why digital currencies cannot bank the unbanked (which is apparently one of Libra’s primary goals), she explained that these people live in “banking deserts” and do not have access to anything other than cash. Cortez asked, “How does any digital-based currency help when people are operating in cash?”

Moreover, Sen. Brian Schatz of Hawaii expressed similar concerns.“What it sounds like to me is tech people wanting to wave a wand and skip a bunch of steps and avoid the tough politics of doing things for people and say, ‘We’ve got a new tech that will solve all this stuff,’” he said while addressing Allaire. “Do you really think that in a society in which only 81% of the public currently has a smartphone we’re anywhere close to democratizing the use of these products?” Schatz went on to add:

“I don’t doubt the importance of the technology or that we’ll probably all be using it in two decades but I think that’s a different assertion than ‘oh, by the way, it’s going to solve all these societal ills.’”

Brown, who went as far as to say that Facebook “broke journalism” and “helped incite a genocide,“ during previous hearings, seized the chance to take another shot at the social media giant and its crypto plans:

“Facebook has proved over and over […] that they can not be trusted. But they don’t care. They move fast, they break things. Minor things, like our political discourse and journalisms and relationships and privacy. Now they want to break our currency and payment systems, hiding behind the phrase ‘innovation.”’

Additionally, other senators said they were puzzled by the way Libra’s operations are reportedly backed by assets. Sen. Mark Warner of Virginia asked, “If you have a 100% reserve, where is Libra going to make money on this?”

Despite the increase in the number of Senate hearings on cryptocurrencies, the U.S. authorities still seem overall hesitant about cryptocurrencies. This could be partly explained by the design of the domestic political system, according to Cal Evans, a U.S. litigation specialist and founder of Gresham International. He told Cointelegraph:

“The biggest problem with the U.S. system is the Federal and State governments compete with each other. We see states such as New York, Wyoming and others being proactive. Whereas the Federal government seems to be conflicted as to which direction to take. It is not so much restrictive laws or rules which hinder Crypto adoption in the U.S. it is more the total lack of any clarity which leaves people confused as to their legality and status.”

Moreover, Evans noted that such sessions, although useful, can also be quite contracted. He elaborated:

“Politicians in the U.S. will use these to push ‚agenda‘ points which suit their circumstances. Let’s not forget, in the U.S. banking and financial institutions are large contributors to members of congress in both houses. It is unlikely that those who’s political positions are financed by the banks, will be backing a technology which ultimately, will replace them.”

Nevertheless, the U.S. would not want to forfeit the crypto space to other jurisdictions, according to McCormick. “It is clear that the Senate is realizing that cryptocurrencies are truly global money that they cannot throw a net around, lest Asian countries take an insurmountable lead in innovating with digital assets,” he told Cointelegraph. “The US is falling behind the rest of the world in terms of regulatory clarity and this led to blockchain startups moving out of the US, evident by Circle moving to Bermuda recently to set up their exchange HQ.”

Indeed, the hearing ended on a high note, as Crapo reiterated his argument about the inevitability and potential benefits of cryptocurrencies. “I want the U.S. to stay at the forefront of this technology, which both has incredible potential and incredible risk,” the senator noted before adjourning the meeting. 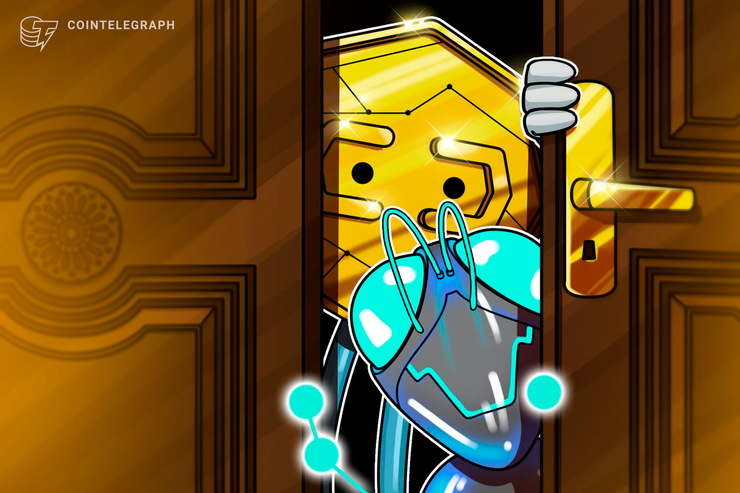