3 Reasons Analysts Are Bullish on Bitcoin Despite 33% Price Correction

3 Reasons Analysts Are Bullish on Bitcoin Despite 33% Price Correction 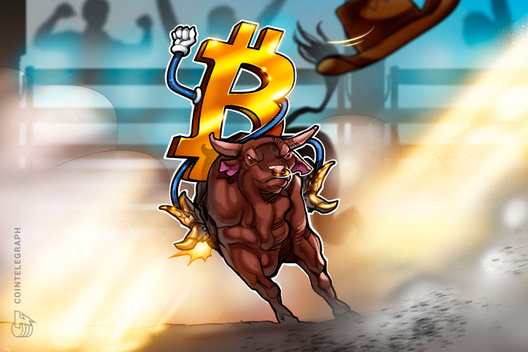 Alongside the looming halving and predicted influx of new institutional platforms for trading Bitcoin, the stage for a new all-time high price could be set

As Bitcoin dropped an additional 8% on Saturday, naysayers claim the rally to a new all-time high is over. So what is it that’s keeping market analysts bullish in the face of a 33 percent correction?

Bitcoin’s most recent price action has been less than satisfactory, unless you’re a bear. To date, the top digital asset is down 32% from it’s 2019 high of $13,739 and short term price action remains overwhelmingly bearish.

Over the past two weeks Bitcoin formed an M-top at $13,739 and $13,177 before dropping to the neckline around $9,600. Most traders expect that Bitcoin will retrace to the 61.8% and 50% Fibonacci Retracement level which is also near the CME futures gap. It’s possible that the group think surrounding the CME gap is causing it to function as a magnet, drawing BTC price nearer to the $8,500 – $7,500 range.

Traders will also have noted that Bitcoin has dropped out of the broadening wedge that had carried it from $4,000 to the 2019 high and the parabolic trend is long negated, hence the probability of a revisit to the 61.8 Fib retracement.

So, the short-term outlook is bearish. Yet several analysts across the sector remain extremely bullish on Bitcoin’s long-term price action. Let’s have a look at some of the key factors which are influencing their opinion.

The amount of unmoved Bitcoin has increased significantly over the past five years and coins falling into this category have been held in the same wallet address for 180 days to 2 years. This suggests that Bitcoin is increasingly becoming a store of value rather than a medium of exchange. One could assume that if Bitcoin’s price continues to rise, so will the number of unmoved Bitcoin.

Not everyone supports this conclusion, however. Adamant Capital founding partner Tuur Demeester countered saying that:

“I’m not so sure […] 5 years without updating your cold storage method is a long time in Bitcoin. Imo most of these coins are likely lost.”

While Demeester could be right, taking a deeper look at the Coin Metrics chart shows that the number of untouched coins on the 1800-day and 1-year time frame has noticeably increased with compared against longer-time frames. This increase also aligns with Bitcoin’s price increase in U.S. dollars.

Ultimately, the given report shows a correlation between increases in Bitcoin price and the amount of wallet addresses holding the digital asset as a store of value.

On Saturday expert crypto-analyst PlanB tweeted a rather intriguing chart that he and ParabolicTrav worked on. 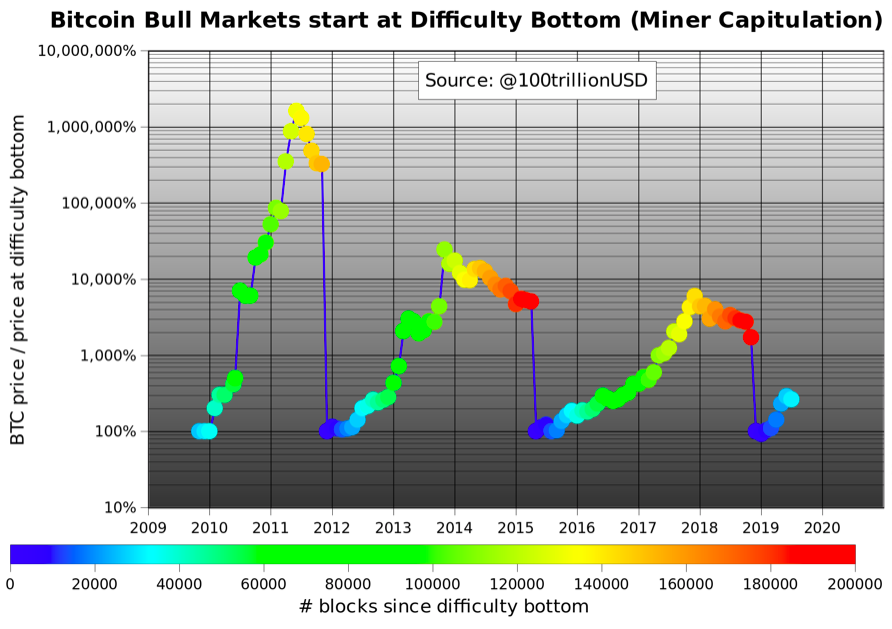 According to the analysts, after a BTC/USD rally reaches its peak, a massive amount of Bitcoin is available at lower prices. The start of new Bitcoin bull markets have coincided with miner capitulation and Bitcoin price tends to rise from these bottoms to grow 100 times.

Cointelegraph reached out to PlanB for further clarification of this observation and PlanB explained:

“It could be a sign of a maturing Bitcoin market with reduced volatility. More money is needed to move markets now than it was in 2010-2011. Or, it could just as easily be 100x again, because Bitcoin markets are nonlinear power law distributed with black swans normally occurring [as opposed] to being outliers.”

Bitcoin’s current price action actually appears to be mirroring previous cycles and since bottoming in February, the digital asset has already rallied to the tune of 300%.

Pre-halving hype could push Bitcoin towards $20,000

A few weeks ago popular crypto-analyst FilbFilb reached an identical conclusion. He is convinced that despite the current correction, Bitcoin price won’t revisit its 2019 low of $3,120.

“Miners sell into market demand everytime the revenue per Bitcon rises above mining costs and he expects that they will ‘limit selling’ as the pre-halving event approaches to invoke the new halving bubble.”

Simply put, the basic rules of supply and demand determine Bitcoin price and FilbFilb believes that “what happened in 2018 was miners selling off their Bitcoins at marginal costs.”

“Only the most efficient miners survived, while their inefficient competitors got eliminated,” he added.

Similar to PlanB and Parabolic Trav, FilbFilb agreed that miners are currently holding on to new mined Bitcoins as they await the 2020 halving event.

If this group of crypto-analysts are correct, then we should begin to see miners selling fewer coins as Bitcoin price gains in the near future. Selling will then resume as buying pressure decreases.

As for the future of Bitcoin’s price, this trio of analysts see BTC/USD following the general trajectory of short-term consolidation followed by pre-halving hype leading Bitcoin back to $20,000.

In the event that Bitcoin does test its all-time high price, it’s entirely possible that long-term holders who purchased BTC near its ATH peak around $16,000 could exit their positions and produce a selloff.

Of course, all of this is dependent on the digital asset’s technical setup as it approaches these highs. From a technical standpoint, the most likely scenario could involve continued decline until $7,500. This would be followed by a lengthy period of consolidation as reaccumulation takes place and Bitcoin’s daily price fluctuations tighten.

But as the excitement around the 2020 halving event builds, most analysts expect miners and investors to hold onto their coins. Alongside the predicted influx of retail investors and the debut of institutional investing services from the likes of Bakkt, TD Ameritrade and Fidelity Investments, the stage could be set for a new all-time high.

Alongside the looming halving and predicted influx of new institutional platforms for trading Bitcoin, the stage for a new all-time high price could be set