The PAC, named Humanity Forward Fund (Humanity FWD), rolled out its Bitcoin-powered fundraising program, named “21 Days of Bitcoin for the 21st Century” on July 25, and will continue accepting Bitcoin donations until Aug. 14, according to its official website.

Humanity FWD was launched by supporters of Democratic presidential candidate Yang on July 24 to support his run for the presidency of the United States in 2020, Coindesk reported July 25.

To enable the Bitcoin-powered fundraising challenge, Humanity FWD partnered with BTC payment processor OpenNode, which will be reportedly accepting Bitcoin from lightning wallets. 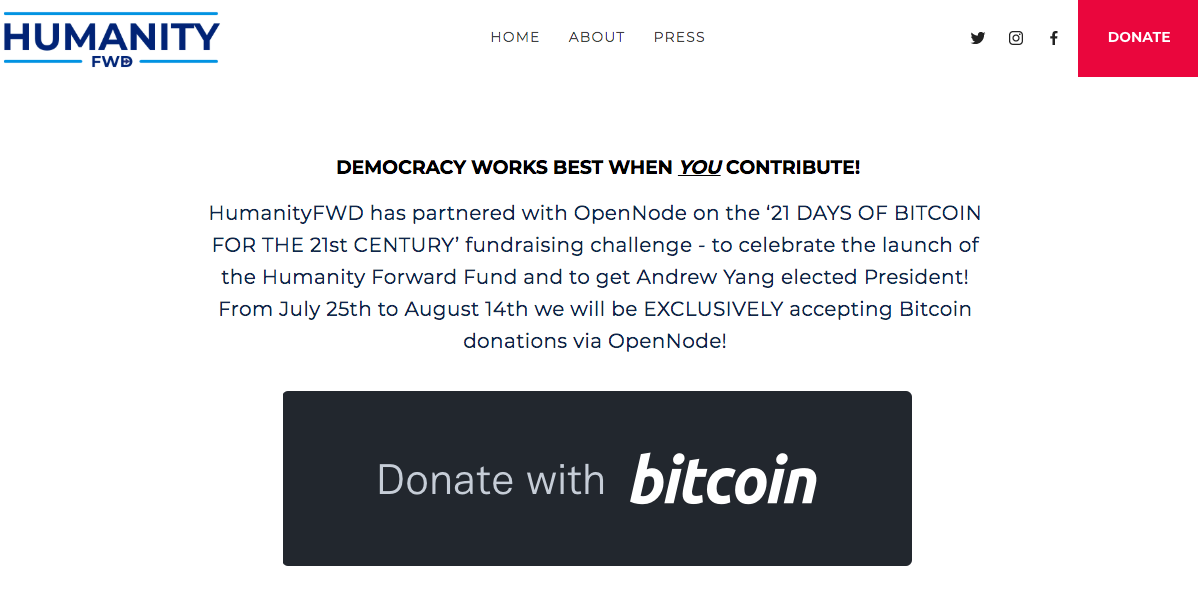 Cohen revealed that the PAC has not yet decided on whether Humanity FWD will immediately convert raised Bitcoin to fiat or rather hold it until after the “21 Days of Bitcoin” program ends, outlining the challenge of managing Bitcoin donations. He elaborated that Bitcoin’s volatility would create additional regulatory requirements, such as the need to keep a record of Bitcoin’s price change for each donation.

Humanity FWD is not the first crypto-powered PAC in the U.S., Coindesk reports, citing data by the Center for Public Integrity that estimated the value of political crypto donations during the 2017-2018 election cycle at $570,000.

In September 2018, California’s campaign regulator banned Bitcoin from political donations as the agency raised concerns over donated funds traceability and transparency. Previously, the South Carolina regulators prohibited a local candidate from using digital currency donations to support his campaign as definition of campaign contribution did not include crypto.

Meanwhile, Yang is known for his pro-blockchain stance. Earlier this year, the candidate advocated for clear regulation in crypto industry.