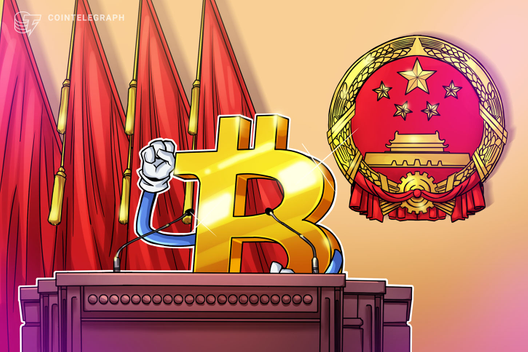 Bitcoin is virtual property, a Chinese court has ruled. Will it change the country’s famously bearish attitude toward cryptocurrencies?

Last week, Bitcoin (BTC) was legally recognized by a Chinese court, whereby it was concluded that the cryptocurrency should now be considered as digital property. The decision that the Hangzhou Internet Court made in a ruling was met with enthusiasm from some community members, who assumed that Bitcoin is now legal in the People’s Republic of China (PRC) — famously one of the harshest jurisdictions for digital currencies in the world — and that the local government might soon ease its pressure on Bitcoin. However, some experts are less confident to call it a regulatory thaw.

China is a key player in the crypto space, hosting a substantial share of Bitcoin mining and trading. According to a late 2018 study, around 60% of BTC’s total hash power is generated in China, while unregulated domestic cryptocurrency exchanges facilitate 60% of all global trading of the stablecoin Tether (USDT), as another study indicates.

Despite such high numbers, the Chinese crypto industry has been significantly constrained as a result of regulatory suppression. In September 2017, domestic authorities banned local exchanges and initial coin offerings (ICOs) from operating. As a result of the crackdown, people in China can hold cryptocurrencies but cannot legally exchange them for fiat money via trading platforms. However, according to Jehan Chu, co-founder of Kenetic Capital, there is a small regulatory loophole: The ban does not directly forbid people from exchanging cryptocurrencies among each other. Chu told Cointelegraph:

“While exchanges and companies that are trading Bitcoin have been banned in China personal ownership and exchange has not been ruled illegal. This has left space for individual ownership while institutional Chinese trade has moved offshore, but intact.”

Ashley Tian, senior legal manager at Ecovis R&G Consulting Ltd., confirmed that peer-to-peer trading remains legal. “Please note that the purchase, sales or hold of cryptocurrency itself does not violate any Chinese law,” she told Cointelegraph in an email. Tian stressed that local people have to use foreign exchanges to purchase digital currencies but also notify local regulators of their investments and pay taxes.

Meanwhile, there have been reports from China suggesting that the 2017 ban could be extended to other crypto-related spheres — namely, mining and marketing. Thus, earlier this year, news surfaced that a local government agency is considering prohibiting crypto mining in the country, while it has been reported that isolated districts in Beijing have prohibited all commercial venues from hosting any cryptocurrency-related event.

Notably, while cryptocurrencies have been subject to harsh regulatory scrutiny in China, Bitcoin’s underlying technology is a national priority for the country’s government. President Xi Jinping has even referred to blockchain as a technological breakthrough, while the city of Hangzhou, the capital of east China’s Zhejiang province, hosts the Blockchain Industrial Park, a partly state-sponsored hub for blockchain development.

The Hangzhou ruling: bullish or neutral?

On July 18, the Hangzhou Internet Court, situated in the same city that houses the Blockchain Industry Park, was overseeing a dispute between a now-defunct exchange and one of its users, identified as Wu.

As local media reports, in 2013, Wu purchased 2.675 BTC for 20,000 RMB (around $2,900) from a platform called FXBTC via a store on online marketplace Taobao and stored them in a digital wallet on its website. According to the plaintiff, in May 2017, he tried to access his funds but discovered that the FXBTC’s website shut down back in 2014. Wu was unable to contact the platform’s administration and hence couldn’t retrieve his Bitcoin holdings.

Wu then filed a lawsuit against FXBTC, who allegedly did not give any notice prior to closing the platform. He also sued Taobao for allowing “banned items like cryptocurrency” to be listed on its market — even though Bitcoin trading in China was banned later in 2017. Wu demanded FXBTC and Taobao to pay around 76,300 RMB ($11,000) in compensation.

Although the bench rejected the plaintiff’s claims against FXBTC and Taobao due to a lack of evidence, it acknowledged Bitcoin as a commodity because it carries value, is scarce and can be used as a means of transferring value. However, digital currencies such as Bitcoin “do not have the legality of an official currency,” the Hangzhou Internet Court specified.

“For the Chinese who purchase the cryptocurrency in legal means, it shall be the lawful property protected by PRC civil laws,” Tian commented on the court’s decision for Cointelegraph. Notably, the People’s Bank of China (PBoC) — the central regulatory authority that oversees financial institutions in the country, which essentially instituted the 2017 crypto ban — has since confirmed the ruling. „Indeed, Bitcoin is virtual property, but it’s not fiat money,“ an official from the PBoC is quoted saying in an article published by the Global Times, a local English-language newspaper.

Dovey Wan, founding partner at Primitive Ventures, who broke the news to the English-speaking part of the crypto community on Twitter, believes that the case marks a milestone for crypto regulation in China. She wrote in an email conversation with Cointelegraph:

“This ruling is from Hangzhou Internet court, not a court from random tier 3 cities, and it’s one of the three dedicated internet/cyber court in China. Since it’s the first one it actually set a narrative precedent for further cases around Bitcoin.”

Wan further suggested that the court wouldn’t be able to make this decision if the general perception of Bitcoin by the PBoC and the ruling party was negative, which could be seen as a political shift toward recognizing cryptocurrencies. Likewise, Chu believes that the court’s decision “sets a precedent for future development and easing of China’s cryptocurrency laws” — if not juridically, then at least socially. He told Cointelegraph:

“Similar to a circuit court in the United States, this local ruling will not mandate national law but sets stage and points the way. More importantly, this ruling massively influences public opinion and normalizes ownership of Bitcoin in the court of public opinion.”

“I personally do not think this is any major change in policies towards Bitcoin in China. It is a regional police case which I have not seen much coverage in traditional media in China except in the Crypto space. Of course there is a chance that this case can be used as a precedence in future cases to defend that Bitcoin is a virtual property, but I believe Chinese legislation is still quite top-down. In addition, it does not make ‘Bitcoin mining’ or ‘Bitcoin trading’ legal at all. As far as I understood, local authorities are still cracking down Bitcoin mining farms across the country.”

Indeed, in October 2018, the Shenzhen Court of International Arbitration also ruled that cryptocurrencies such as Bitcoin are legally protected as property while reviewing an analogous dispute, in which the defendant failed to return holdings of Bitcoin, Bitcoin Cash (BCH) and Bitcoin Diamond (BCD), per a contractual agreement. The news was similarly received in the crypto-focused media as bullish, but the decree ultimately has not changed the regulatory situation in China. At the time, the arbitrator found that the contractual obligation under dispute did not fall under the relevant provisions as outlined in the 2017 prohibition. He declared:

“There is no law or regulation that explicitly prohibits parties from holding Bitcoin or private transactions in Bitcoin, but rather reminds the public about the investment risks. The contract in this case stipulates the obligation to return the Bitcoin between two natural persons, and does not belong to the ICO financing activities stipulated in the Announcement on Preventing the Risk of Subsidy Issuance Financing [i.e., the 2017 ban].”

Thus, the judge concluded that the contract was legally binding, adding, „Bitcoin has the nature of a property, which can be owned and controlled by parties, and is able to provide economic values and benefits.“

Similarly, the United States Internal Revenue Service (IRS) also views cryptocurrencies as property, meaning those who sell their cryptocurrencies for a profit are subject to a capital gains tax.

Can China’s views on crypto change because of Libra?

Regardless of the Hangzhou case, the regulatory landscape in China might soon change due to the arrival of Facebook’s Libra stablecoin. Earlier this month, Wang Xin, the director of China’s central bank, told the South China Morning Post that his agency is developing its own digital currency in response to Libra, saying:

“If [Libra] is widely used for payments, cross-border payments in particular, would it be able to function like money and accordingly have a large influence on monetary policy, financial stability and the international monetary system?”

The PBoC head then stressed that the bank decided to create its own digital currency specifically because of the unclear role the U.S. dollar might have once Libra is issued:

“If the digital currency is closely associated with the U.S. dollar, it could create a scenario under which sovereign currencies would coexist with U.S. dollar-centric digital currencies. But there would be in essence one boss, that is the U.S. dollar and the United States. If so, it would bring a series of economic, financial and even international political consequences.”

As such, the PBoC purportedly received approval from the chief Chinese administrative authority, the State Council, to begin work with other market participants and institutions on a central bank digital currency. Indeed, Zhuling from Aelf argues that Libra is “a confirmation that other countries are going to grow cryptocurrencies at global scale” for the Chinese government, and hence is much more influential than the Hangzhou ruling.

Other experts also agree that the current regulatory situation is far from perfect for local cryptocurrency holders. “The ruling is a positive note but until the average Chinese person can feel safe trading on an onshore exchange, the market will not move for news like this,” Chu of Kenetic Capital told Cointelegraph.

Nevertheless, the recent ruling shows that Chinese authorities might refrain from making hardline, bearish comments on cryptocurrencies in light of Libra as well as of crypto’s overall mainstream adoption. 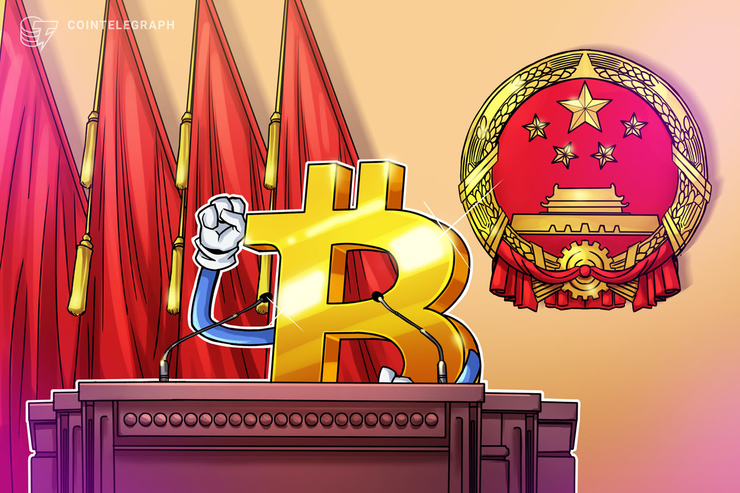 Bitcoin is virtual property, a Chinese court has ruled. Will it change the country’s famously bearish attitude toward cryptocurrencies?