The effect of block reward halvings for both Bitcoin (BTC) and Litecoin (BTC) mining could be mitigated by merged mining, according to a report by a research arm of major crypto exchange Binance released on July 12.

Following Charlie Lee’s prediction that some miners may shut down Litecoin mining after the halving, which is expected to take place on Aug. 5, 2019, Binance Research analyzed the potential of so-called merged mining to retain incentives for crypto miners.

Merged mining is a practice of using the work done for one blockchain, or parent blockchain, on other smaller child blockchains by implementing Auxiliary Proof of Work (AuxPoW). To date, there are three major examples of merged mining, including Bitcoin blockchain-parented Namecoin (NMC), Litecoin-merged Dogecoin (DOGE), and Myriadcoin (XMY) which is merged with both LTC and BTC.

In the new report, Binance Research concluded that merged mining could “potentially provide and opportunity” to increase mining rewards in the light of future block reward halving scheduled for both Litecoin and Bitcoin. Alongside, other smaller chains could also potentially move to AuxPoW in order to support a higher level of network security while reducing the need for a separate mining set, the firm added.

At the same time, Binance Research warned about the potential shortcomings of merged mining from both a miner’s and a project team’s perspectives. Miners may not be incentivized to support child blockchains due to a significant level of operations costs as well as a potential decline in the given coin’s market price.

From the perspective of a project team working on a PoW crypto-asset, risks include dependency on the parent blockchain and new potential attack vectors.

In the report, Binance Research also considered Dogecoin, which has been operating for about six years to date, as the most successful example of merged mining. After Dogecoin adopted the merged mining model in August 2014, the coin’s mining hashrate increased by 1,500% while also showing correlation with Litecoin’s hash rate. According to the report, almost 90% of Dogecoin’s total hash rate derives from large Litecoin mining pools as of July 2019.

On July 5, Binance exchange listed Dogecoin on its crypto trading platform. On the same day, the exchange released its “2019 Q2 Crypto-Correlations Review,” stating that Dogecoin has become less correlated with other cryptos in Q2 2019, alongside with Bitcoin. However, the coin has continued to be significantly correlated with Litecoin, mostly due to the shared mining of two coins, the firm wrote.

On July 9, mining difficulty of bitcoin has reached a new all-time high by hitting a 9.06 trillion at an average hash rate of 64.85 quintillions per second (EH/s). 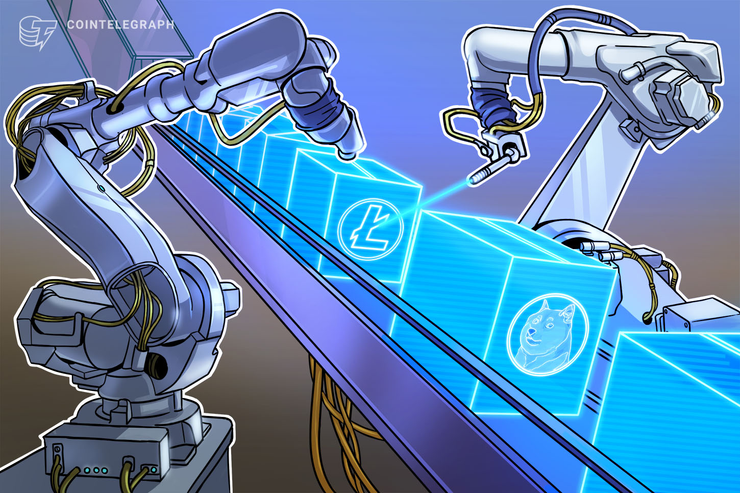