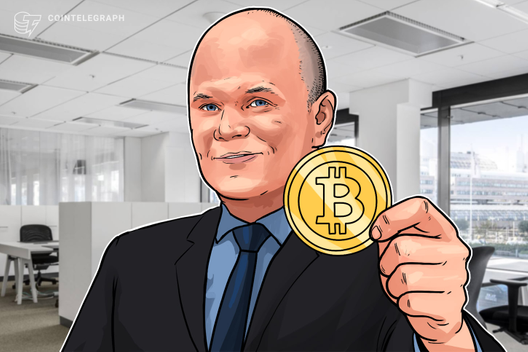 Mike Novogratz has predicted that Bitcoin’s price will stabilize between $10,000 and $14,000

Galaxy Digital founder and crypto enthusiast Mike Novogratz has predicted that Bitcoin’s (BTC) price will stabilize between $10,000 and $14,000, in an interview with CNBC on June 27.

Delivering his comments on CNBC’s Squawk Box show, Novogratz forecast that the leading digital currency will consolidate in the corridor between $10,000 and $14,000. Referring to Facebook’s entry into crypto with Libra, Novogratz said:

“One of the largest companies in the world said we believe in cryptocurrencies. […] If you’re an institutional investor who’s getting close and still worried about investing, it makes you that much more confident.”

The crash came on the heels of yesterday’s rally in which Bitcoin surpassed both the $12,000 and $13,000 price marks in a matter of hours.

Novogratz also commented on Facebook’s forthcoming stablecoin Libra, saying that “The Libra association will have a hundred votes, so it will be distributed. Maybe not decentralized. They plan on decentralizing over time.” Novogratz further added:

“What is tricky is the Facebook wallet which is where they will make their money. It will probably be a large part of commerce that is done on that blockchain.”

“If I’m wrong on that, I think I’m wrong to the upside, that there’s enough excitement and momentum that it could carry through.”

This week, many commentators argued that Bitcoin’s price surge was due to Facebook’s announcement of Libra; however Bitcoin was already trading above $9,000 when Facebook formally unveiled its Libra cryptocurrency protocol. Craig Erlam, a senior market analyst at the financial trading firm Oanda stated:

“Bitcoin has slowly – by its own standards – been rising in recent months but the launch of Facebook’s Libra has clearly been a catalyst for the recent surge.”

Other sources meanwhile agreed about Facebook’s limited role, but lacked faith in Bitcoin itself, Bloomberg calling current enthusiasm “the return of a speculative dream.” Mike Novogratz has predicted that Bitcoin’s price will stabilize between $10,000 and $14,000