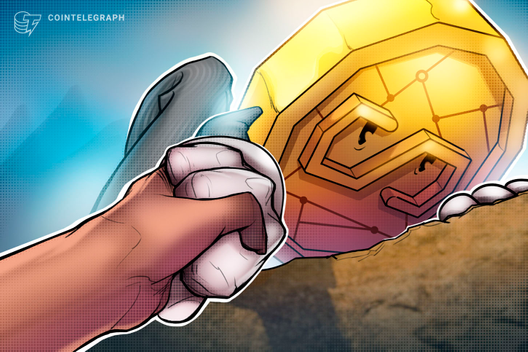 Throughout May 2019, United Kingdom-based nonprofit organization Oxfam International executed a month-long trial that saw MakerDAO’s DAI stablecoin distributed as a means of exchange among citizens of Vanuatu. The Oxfam initiative, named UnBlocked Cash, was conducted in partnership with MakerDAO, ConsenSys and Australian tech startup Sempo. The Australian government also supported the program.

Tsunamis, cyclones and volcanic eruptions comprise a constant concern for the citizens of Vanuatu, with WorldRiskReport describing it as the world’s most at-risk nation to natural disaster for five consecutive years. The month-long program saw 200 residents of the Vanuatu villages of Pango and Mele Maat issued tap-and-pay cards loaded with roughly 4,000 Vanuatu vatu (approximately $50) worth of MakerDao’s DAI stablecoin.

Local vendors who agreed to participate in UnBlocked Cash were provided with Android smartphones with an app facilitating the processing of DAI payments. The vendors were also able to convert DAI into fiat currency through Sempo‘s cryptocurrency exchange or any other platform, if desired. In total, 34 vendors participated in UnBlocked Cash, including local stores and schools.

Approximately 2,000 transactions were recorded during the pilot. Due to privacy concerns, an individual’s purchases were not tracked. However, the program recorded the general category of purchases — such as “medicine,” “food” or “bills.” During May, 5% of all new DAI addresses were created by the citizens of Vanuatu.

According to Australian media outlet Micky, contemporary research indicates that providing aid in the form of a liquid means of exchange is significantly more effective than giving in-kind support, such as food and other basic provisions.

The publication approximates that roughly “70 percent of Syrian refugees have been forced to sell in-kind donations for cash so they can buy the items that actually need to suit their personal circumstances.” The provision of cash also serves to encourage local economic activity.

Sandra Uwantege Hart, the head of Oxfam’s Pacific Cash & Livelihoods in Vanuatu, told Cointelegraph that „Oxfam was already managing a portfolio of activities designed to scale cash transfers as a means of delivering disaster assistance across the Pacific region” as early as 2017. She continued:

“Typically, cash transfers are much more efficient than providing goods as a form of aid relief, but they are also slow to set up and often bogged down by lengthy financial reconciliation processes and slow monitoring and reporting, which is often difficult for donors to verify. We saw the potential for higher transparency, rapid analytics and automated transaction tracking typical of blockchain solutions as a vehicle to improve and accelerate our cash transfer programs and ultimately make them more responsive to people’s needs.”

According to Hart, it took Oxfam “a while to find the right tech provider to get this solution off the ground before settling on Sempo through an RFP process. Sempo stood out from the pack as one of the only tech providers who fully understood both sides of the equation we were trying to solve — how cash transfers work, and how to design blockchain solutions in a local context-adapted way to make them work for the people who need them the most.”

Speaking to Cointelegraph, Sempo’s Melanie Hardman described that the platform’s mission is to solve the challenges encountered by both vendors and customers who seek to conduct trade in periods of crisis. Hardman said:

“Our platform consists of: an app used by vendors as a ‘point of sale’ platform, an e-voucher or ‘tap and go’ card which hold a balance of funds and is used by recipients to make purchases, and a dashboard managed by the Oxfam team, where they can enroll and approve program participants, disburse funds and monitor transactions.”

The platform is able to continue operating offline by “cryptographically recording recipient’s balances on tap-to-pay smart cards, which are then synced at a later point.” The platform also does not require recipients to have access to a mobile phone and does not require users to undergo Know Your Customer (KYC) identification checks, which Hardman described as “critical,” given that many people living in the developing world lack identity documentation.

In late 2018, Sempo used its platform to deliver cash aid to refugees based in the Greek city of Athens, Iraqi Kurdistan, as well as Beirut and Akkar in Lebanon. According to Sempo, the programs saw the “creation of a digital credit transfer platform that is easy for both vendors and recipients to use, regardless of literacy and existing levels of financial inclusion.” The company also noted that it was able to increase the transparency of the program by leveraging distributed ledger technology.

Sempo’s Nick Williams told Cointelegraph that MakerDAO and Sempo developed a process for UnBlocked Cash that distributed DAI-backed digital vouchers, which were redeemable for fiat currency, to Vanuatu citizens.

“Dai was used as collateral for a special e-voucher, which means that vendors can be reimbursed by anyone who meets the regulatory requirements of the Vanuatu Government. This gives the platform capacity for much lower cost overheads, as well as creating the foundations for open financial ecosystems in the communities that need them.”

Greg DiPrisco, head of business development for the Maker Foundation, told Cointelegraph that “Sempo was convinced that Dai was the best solution for their needs and thus went through the proper channels to ensure that they could use it in the pilot.” DiPrisco described the initiative as “a testament to the power of a decentralized stablecoin to empower disenfranchised populations.”

Sempo’s Hardman stated that the company was selected by Oxfam to provide its cash transfer platform technology for the Unblocked Cash pilot following year-long discussions between the two entities regarding “the potential to revolutionize the cash transfer space using blockchain.” Hardman continued:

“Sempo was invited to put forward a proposal by Oxfam as part of their RFP process. This involved Sempo presenting an initial presentation on our work to date, and then developing and submitting a proposal, which we did in partnership with ConsenSys.”

Claudio Lisco, strategic initiatives lead at ConsenSys, told Cointelegraph that the company was engaged by Oxfam alongside Sempo “to assess the time, cost and quality of digital cash based transfer programs” after the nonprofit became aware that ConsenSys had built a financial inclusion platform in conjunction with the Union Bank of the Philippines, titled Project i2i. Lisco stated:

“ConsenSys aided in the initial design of the pilot, provided blockchain advisory and communications support, and evaluated the pilot to make recommendations for future utilization and scaling potential. We were on the ground during the pilot, to document and collect data insights, and conducted interviews and filming. We are now producing the debrief report, video case study, and advising on future developments and how iterations of the cash transfer program can be scaled.”

While Sempo and ConsenSys will meet with Oxfam during the final week of June to discuss the pilot’s findings — and whether there is potential to employ the program at scale in Vanuatu and other regions — representatives of the entities involved indicate that the program was seen as a success.

Oxfam’s Hart stated that Oxfam’s previous cash assistance programs in Vanuatu involved a setup process that “took between 30 minutes and an hour of long lines and verifying paper lists.” According to Sempo’s Hardman:

“Within the pilot, enrolment times were reduced between communities from 5.4 minutes to 3.6 minutes, demonstrating significant time savings when compared with other cash transfer modalities, where recipients may have to attend a registration session, return at another time to verify their identity, and then travel to collect a cheque.”

Hart concluded that there were significant gains in the speed with which Oxfam was able to pay vendors, emphasizing meaningful participation on the part of many small, community-level merchants, who rarely take part in assistance programs due to typically being unable to wait weeks to be paid. Hart explained:

“Now, with weekly payments, virtually all vendors in this trial were small scale and community based, and located within walking distance for most recipients — this means that we are enabling small-scale community economic recovery that is more inclusive and better adapted to people’s purchasing habits.”

Transparency has long comprised a fundamental value proposition put forward by cryptocurrency, with the UnBlocked Cash pilot demonstrating the advantages digital currencies offer over opaque means for distributing public finance. Hardman stated that the initiative “provided high levels of transparency for Oxfam and their donor, the Australian Government, as administrators were able to see transaction data in real time both on the Sempo dashboard, and the public blockchain.”

Hardman also reported that Vanuatu community members indicated that Sempo’s platform would be the preferred modality of aid issuance in future disaster scenarios, attributing such to the greater ease of use afforded to recipients when compared with other forms of cash aid. However, she also noted, on reflection, that Sempo would like to see the platform’s offline data reporting functionality strengthened in order to improve monitoring.

“The pilot demonstrated that direct donations (without any intermediaries or administration) are possible utilizing Ethereum-based stablecoins. This method of transfer was also significantly cheaper for small donations. For instance, bank transfers to Vanuatu from Australia cost approximately $20 AUD. An Ethereum transaction, by contrast, averages less than 10 cents in AUD.“

Moving forward, Hart indicated that Oxfam is currently in the process of compiling reports aimed at showcasing the UnBlocked Cash initiative, and that it will “seek out the resources to be able to plan longer-term, and look at how we scale up this innovation in the Pacific, and elsewhere.”

Joshua Hallwright, Oxfam Australia’s humanitarian lead, told Cointelegraph that it is “highly likely that Oxfam will use stablecoins or other distributed ledger technologies to provide cash aid in disaster responses in the future, either in Vanuatu or elsewhere.”

Hallwright noted that “Oxfam is exploring the use of distributed ledger technologies because of their potential to change power dynamics and address inequities,” adding:

“As DLTs become ever more present in society, Oxfam is engaging in their development and impact in line with our goals of eliminating poverty and reducing inequalities. Oxfam is currently piloting six different uses of DLTs, globally, and sees these pilots as producing important insights that will shape future DLT applications in crisis responses and more broadly in emerging economies.”

The program showcases the potential of cryptocurrencies to facilitate far greater efficiency in the provision of resources, especially within the developing world and in response to crisis formulation. It is also good to hear that more such trials may take place, which could lead to a wide-scale adoption of crypto in the disaster relief sector.