Successful tech firm taps crypto as the solution to the advertising industry’s woes. Its DApp compensates publishers only when the campaign’s goals have been satisfied #SPONSORED

Paying for the ultimate result of an advertising campaign, and not just impressions or clicks, has always been the dream of advertisers. There have been attempts to solve this fundamental problem, but despite technological advancements, inefficiencies have remained. Fraud has been an issue, with underperforming publishers lacking of transparency,  which means that advertisers have been unable to guarantee whether their campaigns have reached the demographics they were promised.

Atayen Inc., a United States-based company that was founded in 2014 — and was, until recently, engaged in developing Facebook apps —  has proposed what they call an “oraclized” distributed application that acts as an “efficiency calculator” for ads placed across multiple venues.

Atayen has created a decentralized application based on the Smart Advertisement Transaction Token (SaTT), which means that the objectives of an ad are woven into a smart contract. The DApp independently measures the number of user interactions with advertising content, and as soon the goals agreed upon between the advertiser and publisher are met, the DApp releases the payment in SaTT to the publisher.

To achieve this, the DApp uses a plethora of external sources of data — or “oracles” — connected to various advertising platforms, such as Facebook, Twitter, Instagram and others.

Gauthier Bros, Atayen’s co-founder, sees this app as a herald of the “transparency revolution”  in online advertising. According to him, this technology may provide a common basis for calculating advertising transactions payments. Bros argues that this improvement is beneficial for advertisers as well as for publishers. He says:

“Defining a common rule of calculation and payment of advertising operations would bring transparency, security and a faster speed for payments to the advertising sector. It is about creating the constitution that governs an advertising transaction.”

Atayen’s DApp is coded in the Solidity language and allows parties to set a range of conditions that trigger the release of advertising payments to the publisher. The actual transaction closure, the number of clicks, the number of views and the total financial expenses are among these parameters.

Atayen says the technology isn’t necessarily bound to stay within the digital world, though. Since it supports an unlimited number of oracles that supply information of real-world events to the DApp, the technology use can be extended to direct marketing, print, billboards and TV ads — to any ad channel that can be independently, reliably and automatically measured.

The company sees their technology as a response to the radical change that the internet has seen during the last 10 years. Since the vast majority of traffic now circulates on sites like Facebook, Twitter and Instagram, simply measuring clicks is no longer relevant to advertisers’ bottom line, the company argues.

Being an enabler of a pay-per-result model for any conceivable advertising vehicle, Atayen’s ad tech aims to allow publishers to charge higher, but more justifiable rates. Bros, who is also Atayen’s CEO, says:

“Oracles feed the transactions, which can be a number of clicks, a number of views, a number of leads. After that, the smart contract calculates the amount owed by an advertiser to a publisher and automatically processes the payment. It’s simple, but efficient.”

To bolster the adoption of its technology, Atayen presented an easy-to-use wallet to manage SaTT, that, according to its spokesman, makes transactions in Bitcoin, Ethereum or SaTT as easy as sending an email.

SaTT is required to buy and sell advertising transactions in Atayen’s DApp. The company says it has taken measures against hoarding, hodling and speculations around this token. Bros explained:

„The purpose of cryptocurrency is to be liquid — to be able to buy products and services. In fact, mere speculation is not enough. Take the example of fiat: It is possible to speculate on forex, but the real utility of trading is consumption. Cryptocurrencies must also be bought for a specific purpose, which cannot be exclusively speculation. In the case of SaTT, it’s purpose is to buy advertising.”

SaTT’s ICO is currently in progress. At the time of writing, it’s ICOBench score is in the top five ongoing ICOs — with a 4.6 out of 5 star rating — and is the number one ongoing ICO in terms of the number of rating opinions, as of the “Week 8 of 2019” report. The company sees it as a sign of recognition of its business model and technology by the expert community. 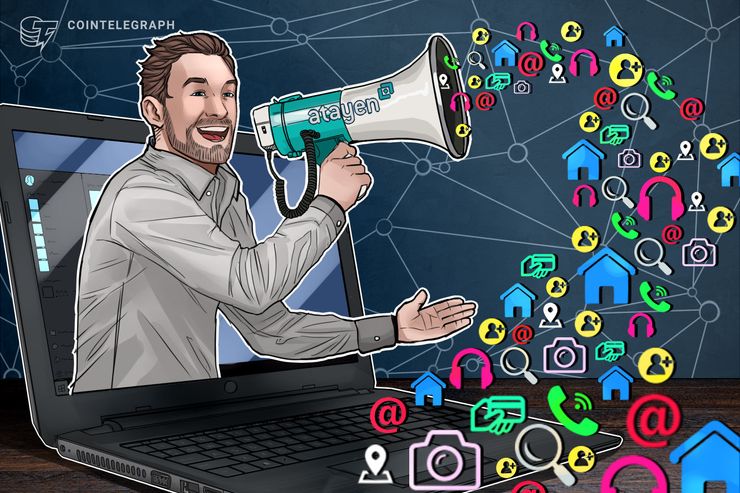 Successful tech firm taps crypto as the solution to the advertising industry’s woes. Its DApp compensates publishers only when the campaign’s goals have been satisfied #SPONSORED