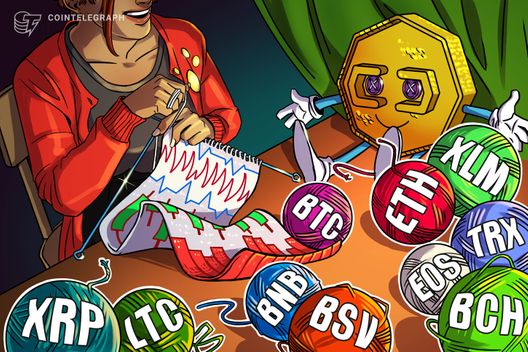 Legendary investor Warren Buffet has doubled down on his criticism of Bitcoin, but what do the charts point to in the short term? Let’s find out

Binance CEO Changpeng Zhao said that investors lapped up the Fetch.AI (FET) token on Feb. 25 in a record time of 22 seconds. This is a bullish sign. It shows that the investor appetite for initial coin offerings (ICOs) is returning.

Though the crypto space has been in a crushing bear market for more than a year, it has not stopped leading banks and stock market exchanges from launching new crypto services. Swiss bank Julius Baer, having about $381.6 billion in assets under management, plans to launch crypto asset services for its clients.

In a survey by KPMG, 48 percent of C-level executives believe that blockchain will change the way they do business in the next three years and 41 percent of participants said they are likely to use the technology. A number of such surveys have shown a growing interest in the blockchain technology by various industries.

However, these changes have still not been able to gain a stamp of approval from legendary investor Warren Buffet. In a recent interview with CNBC, he said that Bitcoin was “a delusion, basically.”

Bitcoin (BTC) has been struggling to rebound from the 20-day EMA for the past two days. This shows nervousness among buyers. A failure to move up will attract liquidation of long positions by the bulls and initiation of short positions by the bears. A breakdown below the downtrend line and the 50-day SMA can result in a drop to the critical support zone of $3,355– $3,236.09. If the digital currency drops to a new yearly low, the downtrend will resume. Therefore, traders can keep the stops on their long positions just below the current yearly low of $3236.09.

Conversely, if the BTC/USD pair moves up from the current level, a rally to the top of the range at $4,255 is probable. A break out of this resistance will signal a double bottom formation, which has a minimum target objective of $5,273.91. When the price sustains above $4,255, a number of traders waiting on the sidelines for a confirmation of a bottom are likely to jump onboard.

Both the moving averages are flat and the RSI is close to 50, which points to a range formation in the near term. Hence, the traders should wait for a breakout above $4,255 to add the remaining position.

Ethereum (ETH) has stabilized at the 20-day EMA. The bulls are trying to push the prices higher but have not been able to clear $145 for the past two days. A breakout of this level will be bullish resulting in a move towards $167.32. Therefore, traders can hold the remaining long positions with a stop loss of $125.

On the contrary, a breakdown of the 20-day EMA can sink the ETH/USD pair to the 50-day SMA and below it to $116.30. Both the moving averages are flat and the RSI is in the positive zone. This points to a consolidation in the short-term until the bulls breakout of the resistance or the bears breakdown of the supports.

Ripple (XRP) bounced sharply on Feb. 25 and even managed to move above $0.33108 but it could not sustain the higher levels. The bears again pushed prices back towards the moving averages on Feb. 26.

Currently, the bulls are trying to defend the moving averages. If successful, they will again attempt to break out of $0.33108. The XRP/USD pair will pick up momentum on a close above $0.33108. The target levels to watch on the upside are $0.40.

On the other hand, if the price slides below the moving averages again, it can drop to the next support at $0.27795. If this level breaks, the fall can extend to the yearly low of $0.24508. Traders can protect their long positions with the stop placed just below $0.27795.

EOS is attempting to hold and bounce off the 20-day EMA for the past three days. If successful, it will again try to break out of the overhead resistance at $3.8723. Above this level, the move can extend to $4.4930. This time, we anticipate the bulls to scale the resistance and surge towards $6. Hence, we suggest traders hold their remaining long positions with the stop loss at $2.90.

The EOS/USD pair will weaken if it declines below the 20-day EMA and the $3.2081 support zone. If this zone breaks, the next support is at the 50-day SMA. As both the moving averages are flattening out and the RSI is marginally in the positive, a consolidation for a few days is probable.

Litecoin (LTC) has been holding above the 20-day EMA for the past two days but has not been able to clear the overhead resistance at $47.2460. The 20-day EMA is flattening out and the RSI is close to the midpoint. This points to a consolidation in the short-term.

The recovery will resume if the bulls push the price above $47.2460. The next level to watch on the upside is $53 and above it $60. Therefore, we suggest traders hold their remaining long positions with the stop loss at $40.

Our view will be invalidated if the LTC/USD pair breaks down of the 20-day EMA and plunges to the 50-day SMA.

Bitcoin Cash (BCH) has been holding the support at the moving averages for the past two days. However, it has not been able to rise and sustain above the 20-day EMA.

A breakdown of the moving averages can attract selling that can plummet the price to $105 and if this level also fails to hold, the next support is way lower at $73.50. Therefore, traders having long positions can maintain the stop loss at $116.

On the upside, the BCH/USD pair will pick up momentum above $160. The flat moving averages and RSI at the center indicates a range formation in the near term.

Stellar (XLM) has been trading above the downtrend line for the past two days but the price has not rebounded strongly from the support. This shows a lack of demand at the current levels.

The XLM/USD pair will show strength if the bulls push it above $0.10. After scaling above this level, it can rally to the overhead resistance of $0.13427050. If the overall sentiment remains positive, we might suggest a short-term trade in it.

But if the digital currency turns down from the current level and plunges below the downtrend line, it can slide $0.0750 and below it to the low of $0.07256747.

The daily range in Tron (TRX) has been shrinking for the past two days. The small range shows that the bulls and the bears are waiting for a clear direction before taking a decisive action.

The price is largely stuck between $0.0230 on the downside and $0.02815521 on the upside. If the bulls scale above the overhead resistance and sustain it, a new uptrend is probable. Hence, we might suggest long positions again after the TRX/USD pair breaks out of the range convincingly.

The bulls are attempting to hold the 20-day EMA, while the bears are defending the $10–$12 zone. If Binance Coin (BNB) sustains the rebound, it is likely to consolidate there.

Both the moving averages are still sloping up and the RSI is in positive territory. This shows that the trend is up. In an uptrend, as long as the strong support holds, pullbacks should be viewed as buying opportunity.

If the BNB/USD pair sustains above $10, we might suggest taking a small position in it. A remaining position can be added above $12. Our bullish view will be invalidated if the bears sink the pair below the 20-day EMA. The next level to watch on the downside is the 50-day SMA.

Bitcoin SV rallied for the past two days and scaled above the overhead resistance of $71.412. However, the bulls are finding it difficult to sustain these levels. The bears are trying to sink the price back below the 50-day SMA.

The moving averages are on the verge of a bullish crossover, which is a positive sign. Traders can buy above $78 and keep a stop loss of $60. The target objective is $102. However, if the price struggles to break out of $90, partial profits can be booked and the stops on the rest can be trailed higher to breakeven. As the risk to reward ratio is not attractive, traders can keep the position size at about 40 percent of usual.

Legendary investor Warren Buffet has doubled down on his criticism of Bitcoin, but what do the charts point to in the short term? Let’s find out