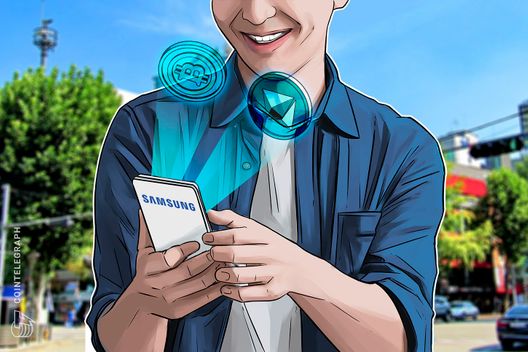 The new Galaxy S10 series smartphones by South Korean tech giant Samsung will apparently have wallet functions for Ethereum (ETH), Bitcoin (BTC) and two other tokens. A Samsung official spoke about the phone’s new features at the Mobile World Congress in Barcelona, Spain on Feb. 25.

In its presentation, Samsung revealed various crypto and blockchain related projects featured on the smartphone, including support for Bitcoin, Ethereum, COSMEE token (COSM) and Enjin’s token (ENJ). COSMEE is a blockchain-enabled mobile beauty decentralized app (DApp) where users can earn and spend COSM tokens. Enjin is a cryptocurrency wallet which will reportedly be installed in the new Galaxy S10.

COSMEE claims to have been selected by Samsung as the first partner DApp supported by its upcoming smartphone, while Enji can reportedly be used to send and receive ERC-20 tokens and ERC-1155 crypto game assets.

Varying reports have surfaced regarding blockchain and crypto integration in Samsung’s new phones. In December 2018, Samsung dismissed the idea of an integrated crypto wallet as “rumour and speculation.” In January, leaked photographs of the new smartphone suggested that the Galaxy S10 would support an Ethereum wallet.