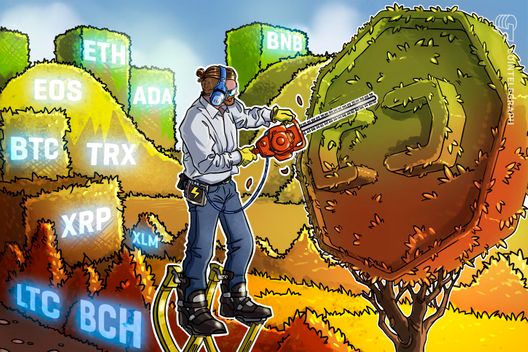 The longer the markets ignore fundamentals, the stronger the eventual breakout

A bottom formation after a long bear market is not a linear process. At various intervals, we are likely to witness spurts of buying and selling as the bulls and the bears attempt to establish their supremacy. After a smart recovery from the lows, when it looked like the bears had surrendered, came the plunge on Feb. 24, that wiped off about $15 billion from the total market capitalization within a few minutes.

Such selling is not always based on fundamental news or events. Technical factors like profit booking near a stiff resistance and initiation of short positions by aggressive bears can bring about such a sharp fall. While we expect volatility in the bottoming process, we are keeping our focus on the positive fundamental developments. The longer the markets disregard the fundamentals, the stronger the eventual breakout will be.

After Venezuela, now Russia plans to launch an oil-backed cryptocurrency. OPEC along with Russia are exploring options for settling their energy dealings in crypto instead of Petrodollars. If this happens, it will give a big boost to crypto markets. When a head of state endorses blockchain technology and recommends it to the leaders of other nations, it shows that the time of this technology has come.

The recovery in Bitcoin (BTC) that started from $3,355 could not scale above the critical resistance of $4,255. The bears swung into action on Feb. 25 and pushed the price back down to the 20-day EMA. The downtrend line, which had previously acted as a stiff resistance, should act as a strong support now.

If the price bounces from current levels, the bulls will again try to break out of $4,255. If successful, it will indicate a double bottom formation that has a pattern target of $5,273.91. The traders can protect their long positions with a stop loss just below $3,236.09.

Contrary to our assumption, if the bears sink the BTC/USD pair below the downtrend line, it can again correct to $3,355. If the support fails to hold up, the next support on the downside is at $3236.09, below which the downtrend will resume.

Both the moving averages are flat and the RSI is close to the center, which points to a consolidation in the near term. The price action of the next couple of days will give us better insight on whether lower levels are in the offering or is this just a shakeout of the weaker hands.

Ethereum (ETH) took a nosedive on Feb. 24 after rising above the overhead resistance of $167.32. We hope traders booked profits on half of their long positions as we had suggested.

The decline on Feb. 24 wiped off gains of the past six days. This shows the extent of the carnage. The ETH/USD pair is trying to bounce off the critical support at $134.5. The 20-day EMA is also nearby, hence, this level assumes significance.

A failure to hold this level will indicate weakness and will attract further selling. Below $134.50, a drop to $116.30 is probable. Therefore, traders can keep a stop loss of $125 on the remaining half position.

We do not want to close the position at current levels, because if the bulls succeed in defending the support, they will make another attempt to break out of $167.32.

Ripple (XRP) closed above the overhead resistance of $0.33108 on Feb. 23, thus triggering our buy recommendation. However, the very next day, the digital currency turned around and plunged below both the moving averages. It is currently attempting to hold the immediate support at $0.29282.

Currently, both the moving averages are flat and the RSI is just above the 50 level. This shows a balance between the buyers and the sellers. Traders can keep their stop loss just below $0.27795.

If the XRP/USD pair finds support at current levels, it will again try to break out of $0.33108. However, if it breaks down of $0.29282, it can slide to the next support at $0.27795, which should hold. If we do not find signs of buying within the next couple of days, we might suggest to close the position.

EOS reached our target objective of $4.4930 on Feb. 23. However, it did not stay at that level and quickly turned around. The fall was sharp, as it easily broke below the support of $3.8723. We hope traders would have locked in profits on half of their long positions as we had recommended in the previous analysis.

Currently, the EOS/USD pair is trying to hold the support at the 20-day EMA, which is sloping up. If successful, it will again try to break out of $3.8723.

However, if the bears breakdown of the 20-day EMA, the fall can extend to the 50-day SMA. If this support also breaks, the slide can reach the critical support at $2.1733. Therefore, traders can keep a stop loss of $2.90 on the remaining open position.

Litecoin (LTC) turned around from just above $53 on Feb. 24. The fall was sharp, and the support at $47.2460 was taken out instantly. We hope the traders had trailed the stops on half of their long position closely and locked in profits as suggested by us.

Currently, the bulls are trying to hold the 20-day EMA. If successful, the LTC/USD pair will again attempt to rise above $47.2460. However, if the support gives way, the pair can dive to the 50-day SMA. If this support also breaks, the trend will turn in favor of the bears. Hence, traders can keep their stop loss on the remaining position at $40.

Both the moving averages are flattening out and the RSI has dipped close to 50. This increases the probability of a range formation in the short-term.

Bitcoin Cash (BCH) attempted to extend its recovery on Feb. 23 but the sharp fall on Feb. 24 took it back to the moving averages.

Our view will be negated if the bears sink the BCH/USD pair below the moving averages. Such a move will result in a fall to $105. Traders who are long can hold their positions with the stop at $116.

Previous strong resistances act as supports after they are crossed. Thus, the downtrend line is likely to act as a strong support. If the XLM/USD pair bounces off this support, it will again attempt to scale the 50-day SMA.

Both the moving averages are flattening out and the RSI is close to the neutral zone. Hence, we anticipate a consolidation in the next few days. As the pair is still close to its yearly lows, we shall wait for a trend reversal before proposing a trade in it.

Currently, the bulls are again attempting to scale above the moving averages and the downtrend line. If successful, the TRX/USD pair will make another attempt to rise above the overhead resistance.

Binance Coin (BNB) is facing resistance in the zone of $10 to $12 as we have been mentioning. The price dipped back from close to $12 to just below $10 on Feb. 24. Nevertheless, we like the way the price bounced off the 20-day EMA, which shows that the bulls are buying on dips.

With both the moving averages sloping up and the RSI in the positive territory, the trend remains up. If the price sustains above $10, we anticipate the digital currency to consolidate between $10 and $12 for a few more days.

Our view will be invalidated if the BNB/USD pair plummets below the 20-day EMA. That can lead to a fall to the next support at the 50-day SMA. A breakdown of the 50-day SMA will tilt the advantage in favor of the bears. We shall wait for a breakout above $12 before recommending a trade in it.

Cardano (ADA) came close to the overhead resistance of $0.051468 but could not cross it. Strong selling at this resistance dragged the price back to the moving averages. The moving averages are fat and the RSI is also at the midpoint. This suggests that the consolidation is likely to continue for a few more days.

We shall turn positive on a breakout of the overhead resistance. Another probable trade is to buy closer to the bottom of the range, after a strong bounce from it. Such an entry will help the traders buy closer to a strong support. However, we shall suggest this trade only after the ADA/USD pair rebounds sharply from the key support of $0.036815. We do not find any buy setups at current levels.

The longer the markets ignore fundamentals, the stronger the eventual breakout