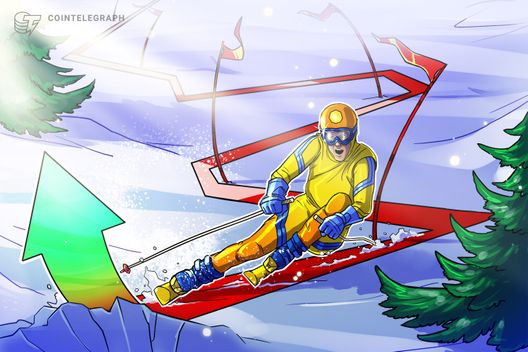 Bitcoin falls sharply back under $3,900 from over $4,000 as the top 20 cryptocurrencies report heavy losses

Sunday, Feb. 24 — the top 20 cryptocurrencies saw a sharp market reversal, reporting heavy losses over the 24 hours to press time after earlier today seeing major gains. Most of the severe downward movement among top coins happened in under half an hour.

At press time, Bitcoin is down over 5 percent on the day, trading at around $3,806, about 10 percent down from its mid-day high of $4,210, according to CoinMarketCap data. Looking at its weekly chart, the current price is just under 5 percent higher than $3,632, the price at which Bitcoin started the week.

Leading derivatives market CME Group tweeted on Feb. 21 that the recent surge in Bitcoin’s price at the beginning of the week lead to record Bitcoin futures volumes on Feb. 19, with over 18 thousand contracts traded.

Ethereum (ETH) is holding its position as the largest altcoin by market cap, which by press time is over $14.5 billion. The second-largest altcoin, Ripple (XRP), has a market cap of about $12.4 billion.

ETH has seen heavy losses, down almost 9 percent over the last 24 hours, according to CoinMarketCap. At press time, ETH is trading around $139, after having started the day at $148. The current price is about 16 percent lower than the coin’s mid-day high of $165.

On its weekly chart, Ethereum has seen its value increase almost 9 percent from $126, the price at which the coin started the week.

Ripple has lost nearly 7 percent in the 24 hours to press time and is currently trading at around $0.301, over 12 percent lower than its $0.34 high reported earlier today.

On its weekly chart, the coin has almost entirely reversed its gains, up just a fraction of a percent from the start of the week.

Among the top 20 cryptocurrencies, the ones experiencing the most notable losses are Litecoin (LTC), Bitcoin Cash (BCH) and Ethereum Classic (ETC), all seeing double-digit losses around 10 percent to press time.

Earlier this week, news broke that the Russian State Duma (the lower house of the Federal Assembly of Russia) plans to review and adopt new cryptocurrency regulation in March and that the country’s former Energy Minister, Igor Yusufov, is also proposing an oil-backed cryptocurrency.

Bitcoin falls sharply back under $3,900 from over $4,000 as the top 20 cryptocurrencies report heavy losses