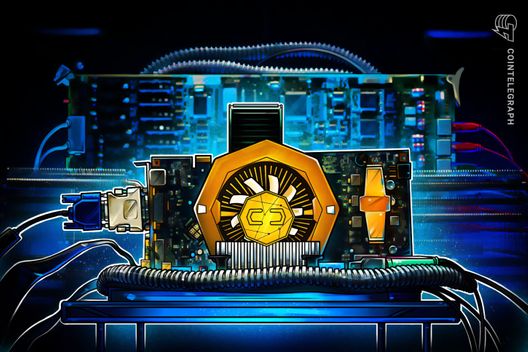 The bear market was particularly hard on Nvidia and its GPUs, but the company still reported full-year revenue gains in 2018. How dependent is it on the crypto market?

On Feb. 14, California-headquartered gaming and computer hardware manufacturer Nvidia reported full-year revenue gains in 2018, despite being one of the companies worst hit by the cryptocurrency market dip and subsequent lack of demand for mining components.

The firm’s main products include graphics processing units (GPU), among others, which became widely purchased by miners during the crypto boom of 2017 — as a result, the firm’s revenue started to correlate with the crypto market condition (at least to some extent), which resulted in a few shake-ups. 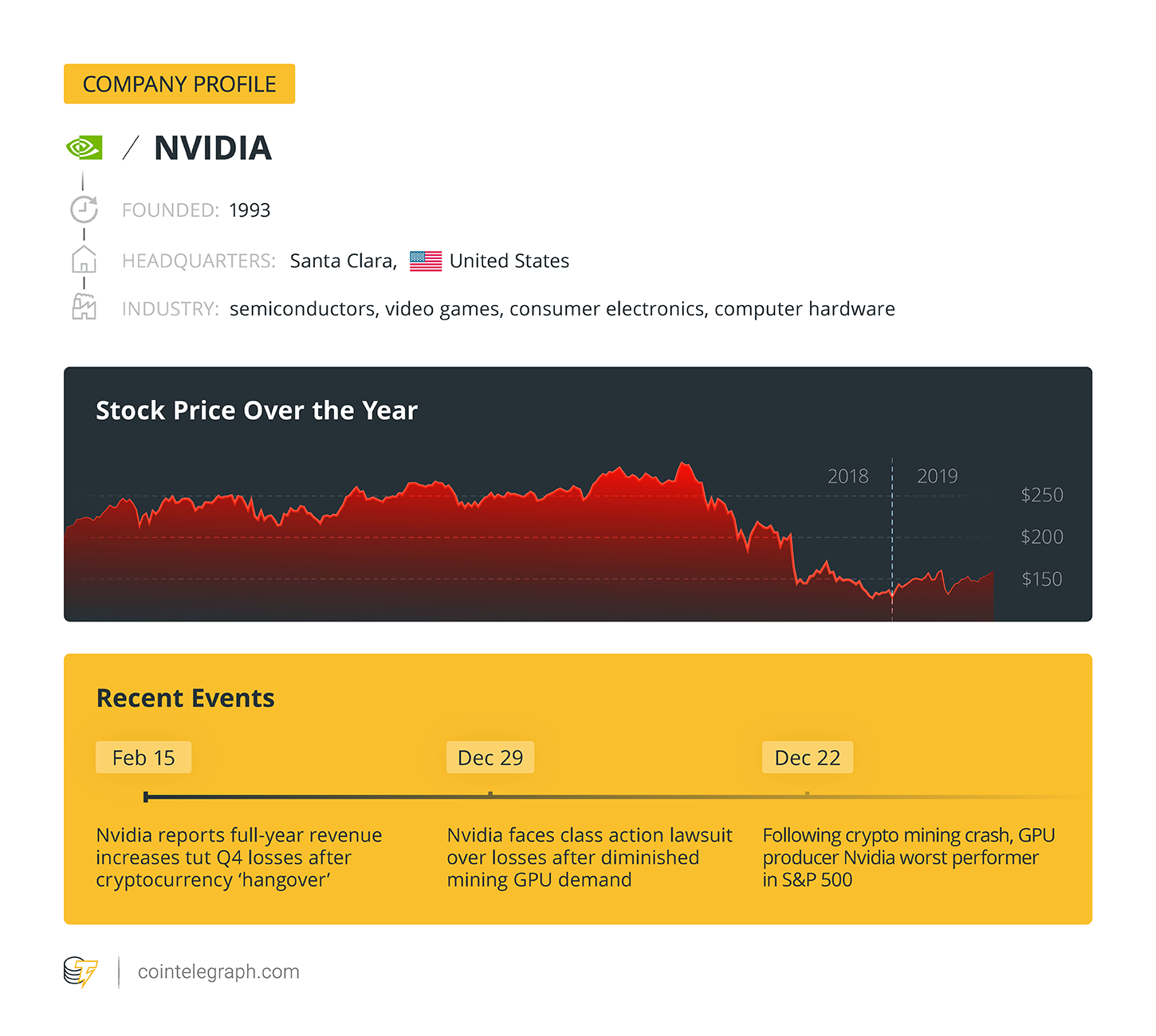 In 2017, its primary GPU product line, labeled “GeForce” — as well as its direct competition, Advanced Micro Devices’ (AMD) “Radeon” units — began surging in price as the crypto frenzy unfolded and Bitcoin (BTC), along with altcoins, gained mainstream recognition. That year, according to Jon Peddie Research, a market research firm for the computer graphics industry, miners purchased around 3 million devices for more than $700 million. As a result, Nvidia inadvertently became one of the market’s most significant players. 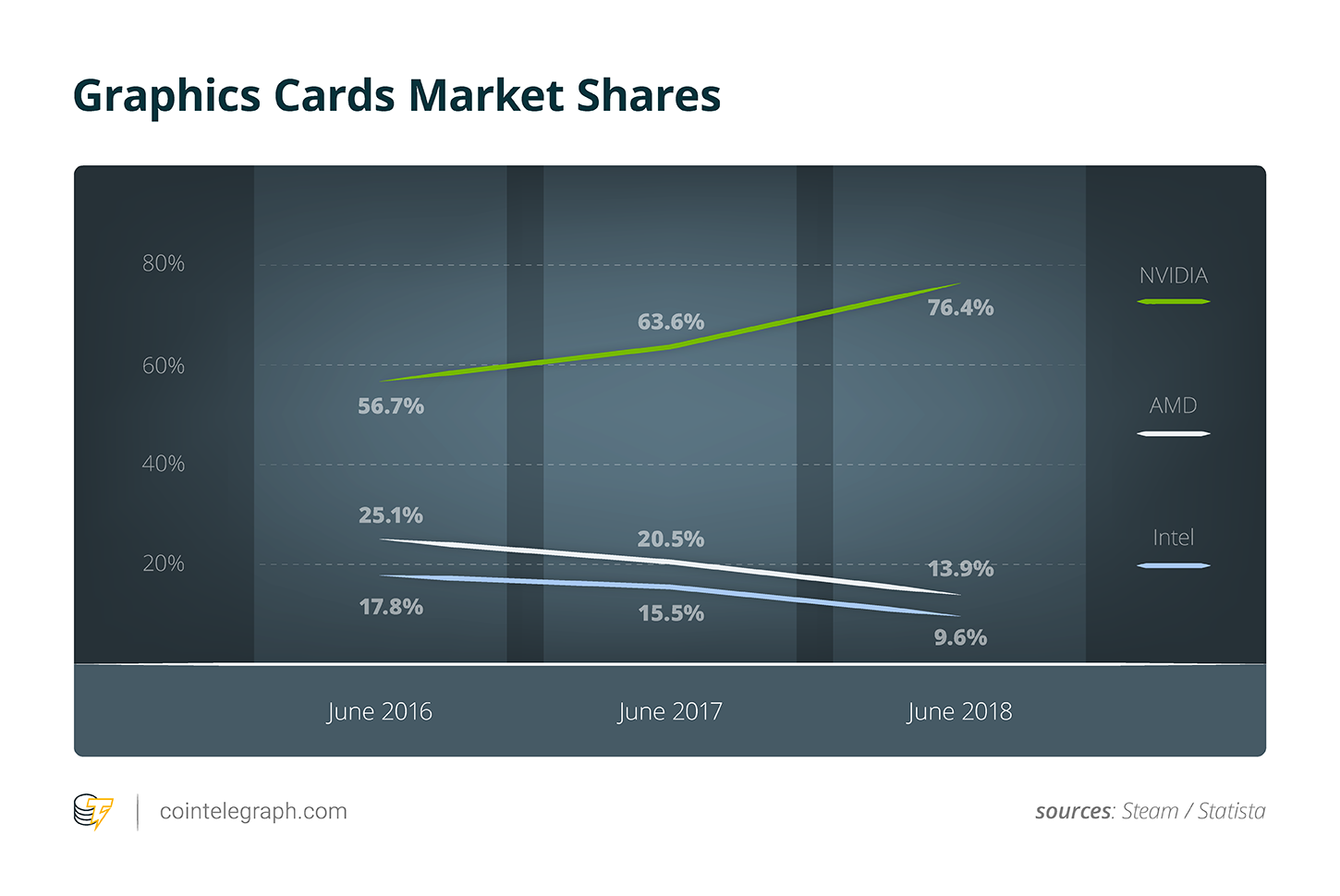 The ever-increasing demand for mining equipment lead to higher prices: As Cointelegraph previously reported, the cost of flagship chips rose by 25 percent, with Nvidia’s GeForce 1080 being sold for more than $1,000 during the market peak, while it normally retailed for $550. According to media reports, Nvidia even started limiting its online sales to avoid excessive resell, allowing customer to buy no more than two items per person.

The company’s seniors greeted the sudden increase in sales caused by the rapid growth of an emerging market. In August 2017, while talking to MarketWatch, Nvidia CEO Jensen Huang appeared notably bullish about the crypto industry:

“Crypto is here to stay, and the market will grow to be quite large. […] It’s not likely to go away any time soon. There will be more currencies to come, they will come from different nations. […] We stay very close to the market, and understand the dynamics very well.”

In May 2018, Nvidia shared information about its revenue from chip sales to the crypto mining market for the first time. Specifically, the manufacturer reported earning as much as $289 million from processor sales to miners. Essentially, Nvidia was growing along with the market: The firm’s first-quarter crypto sales that year amounted to over 9 percent of overall revenue for the company, which stood at $3.2 billion.

“Crypto miners bought a lot of our GPUs in the quarter and it drove prices up,” the company’s CEO reportedly explained on the conference call, adding, however, that high prices prevented other consumers, such as gamers, from buying into the newest GeForce graphics card series.

However, by that time, Bitcoin had long entered its notorious nosedive — in January alone, the cryptocurrency lost half of its value from the $20,000 landmark high — and Huang wasn’t as optimistic about the market anymore. The sales to the crypto market would likely decrease by two-thirds in Q2 2018, the company forecasted.

“In the beginning of the year, we thought and projected crypto would be a larger contribution through the rest of the year, but at this time we consider it to be immaterial for the second half,” Huang told MarketWatch at the time.

Indeed, as Cointelegraph reported, revenue for miners had decreased, as the crypto market underwent a correction following record highs in December 2017. Hash rates were still growing, however, indicating that the mining pool continued to expand globally. 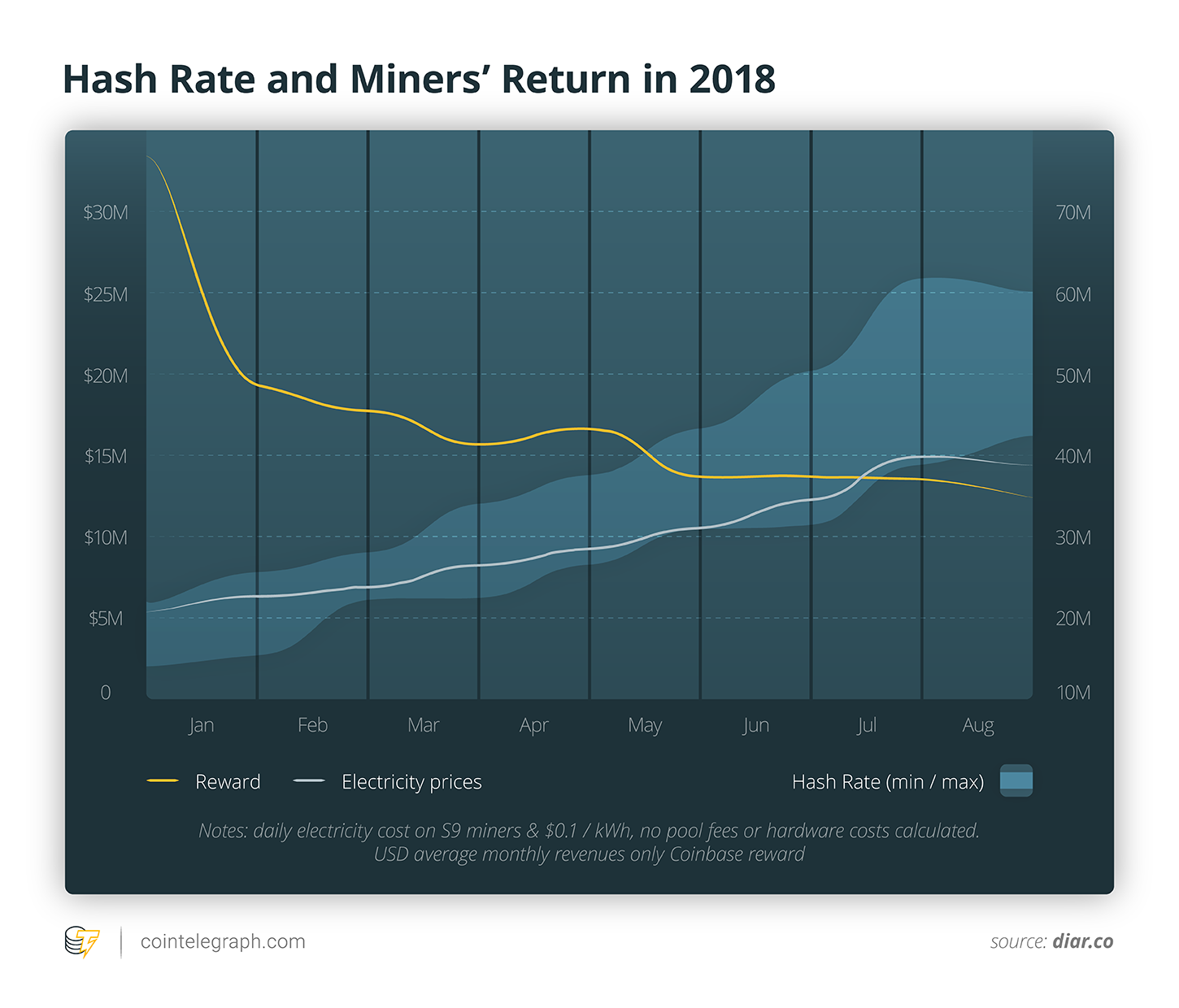 In August 2018, the hardware developer declared that crypto mining sales in Q2 were even lower than expected. Nvidia began to dismiss the once profitable market, arguing that it does not expect to make significant mining-related sales for the rest of the year. Colette Kress, the company’s chief financial officer, stated:

Nvidia also forecasted its third quarter revenue between $3.19 billion and $3.32 billion, lower than the figure predicted by analysts of $3.34 billion. As a result, the manufacturer’s shares declined more than 5 percent.

In July 2018, media started to report that the price of specialized GPUs has been declining along with sinking prices in digital currency markets. Thus, according to Computerworld, in April 2018, AMD’s OEM 4GB RX 580 six-pack was sold out at the price of $3,600, while in July, it was available for just $2,500. Respectively, an Nvidia GeForce GTX 1080 Founders Edition, 8GB GDDR5X PCI Express 3.0 Graphics Card was sold out at a price tag of $1,050 in April, but could be purchased for $709 around July. 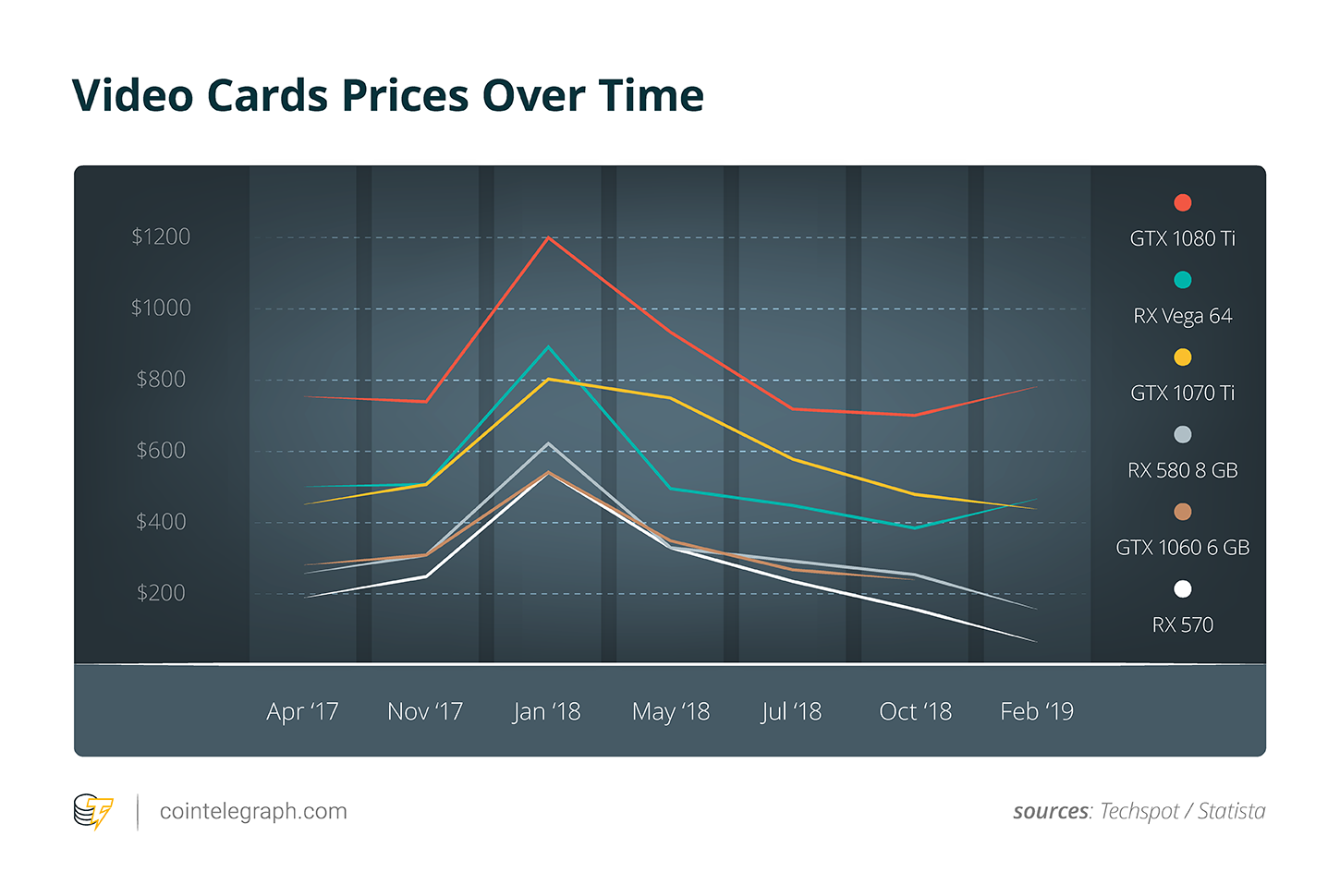 Meanwhile, application specific integrated circuits (ASICs), a special type of computer chip that is designed solely for cryptocurrency mining, had been developed for a number of cryptocurrencies, outperforming GPUs. The largest company to ride the ASIC wave was the China-based Bitmain company, which was eventually also severely hit by the bear market. Nevertheless, the outfit began selling devices that mined non-ASIC-resistant cryptocurrencies much more efficiently than GPUs, hence partially forcing Nvidia out of mining, especially within the BTC blockchain.

Nevertheless, some cryptocurrencies can still be mined only with GPUs, says Mark D’Aria, founder and CEO of Bitpro, a New York-based installation and mining operation management firm:

“It is unlikely that Bitmain can drive Nvidia *completely* off of the market – they can certainly drive Nvidia GPUs mostly out of mining certain coins, but there are many ASIC resistant coins out there, and it would be extremely beneficial for Nvidia (and AMD) if Ethereum goes through with the ProgPoW update.”

“Bitmain’s performance is closely tied to the performance of cryptocurrency while Nvidia has a wide range of markets such as gaming, AI and hash functions more general, it is not only mining operations that are hashing. Nvidia cards are excellent for the vast majority of hashing operations needed in the world, far more than an ASIC that has a single use. Not to be confused, the unique use of an ASIC is very useful, but strictly in the case of Bitcoin mining.”

Further, on Nov. 15, Nvidia released its earnings report for the Q3 of 2018. In the report, Huang revealed that the company’s “near-term results reflect excess channel inventory post the cryptocurrency boom, which will be corrected.”

Basically, while the crypto frenzy increased prices for Nvidia’s gaming cards, once that demand vanished, prices did not decrease quickly enough to attract customers who were waiting for more affordable cards. The CEO referred to this period as a “crypto hangover” in an interview with Reuters:

“The crypto hangover lasted longer than we expected. We thought we had done a better job managing the cryptocurrency dynamics.”

Nvidia’s post of sales for Q3 missed expectations yet again, and the company’s shares dropped another 17 percent. Around the same time, Goldman Sachs removed Nvidia from its list of stocks with the most potential for investors. “We were clearly wrong on the stock as we underestimated the magnitude of the channel inventory build in midrange gaming GPUs,” its analysts explained. Thus, Wall Street’s crypto-driven expectations from the hardware developer were not met.

In December, CNBC reported that in Q4 2018, Nvidia experienced a massive sell-off of its shares, cutting the stock price by 54 percent, which made it the worst performer in the S&P 500. Later that month, Nvidia even faced a class-action lawsuit over its losses. Specifically, the complaint filed by Schall law firm stated that “the Company made false and misleading statements to the market” and “touted its ability to monitor the cryptocurrency market and make rapid changes to its business as necessary.”

2019: Weak sales are likely to continue. However, the company will carry on regardless of crypto

In January 2019, Nvidia updated its financial estimates for Q4 for the fiscal year of 2019, reflecting weaker forecasted sales in its gaming and data center platforms, explained by excess midrange channel inventory following the slump in crypto market. The revenue for that quarter was now expected to be at $2.20 billion, opposed to the previous projection of $2.70 billion. 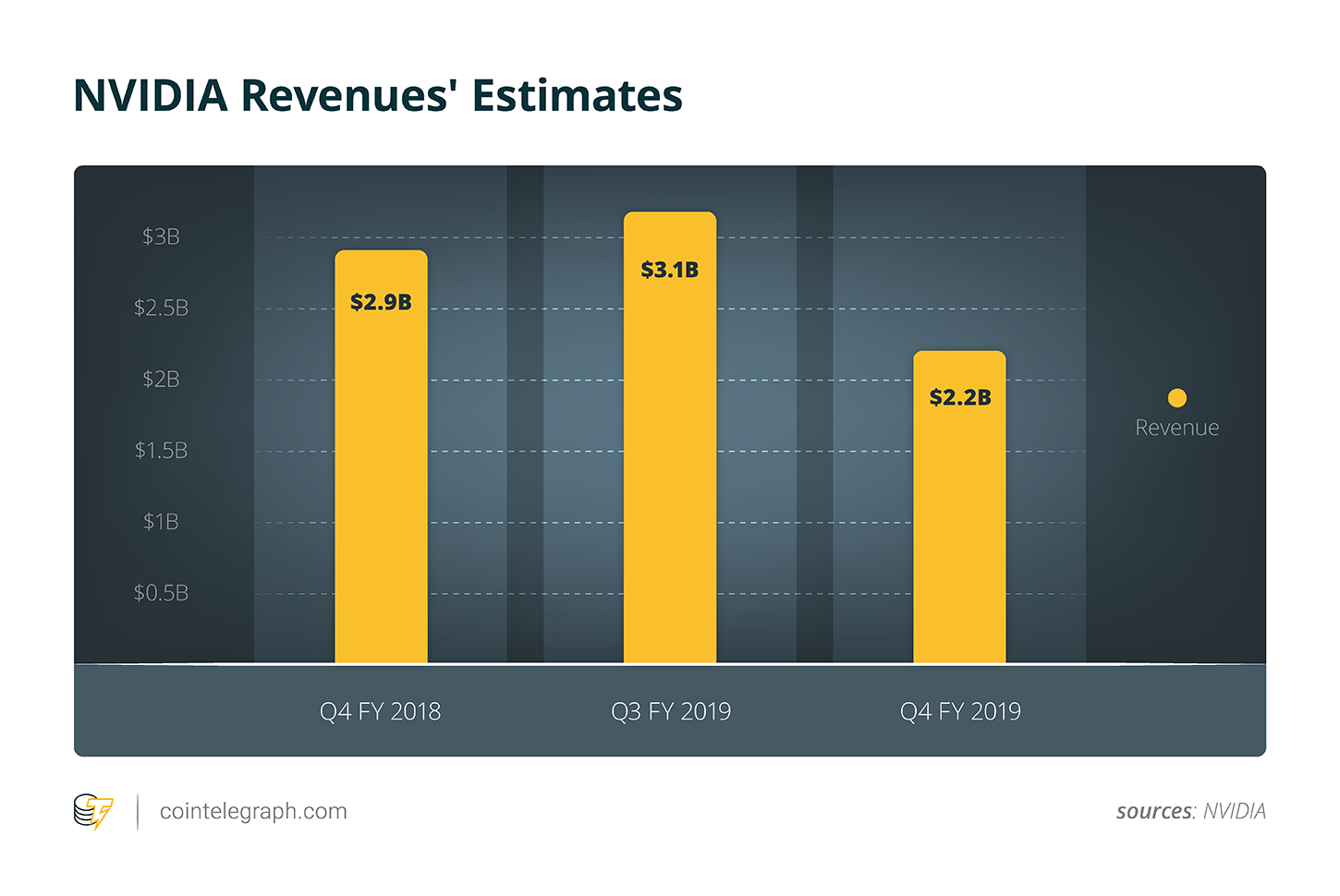 “Q4 was an extraordinary, unusually turbulent, and disappointing quarter.”

In addition to a lack of crypto-related business, Nvidia also cited “deteriorating conditions” in China as a indicator of lower-than-expected revenue from gaming GPU sales in Q4.

Finally, in February 2019, the United States hardware firm reported full-year revenue gains after publishing its Q4 earnings. According to the press release, its total 2018 revenue climbed 21 percent from 2017 numbers to $11.72 billion, even despite the crypto market crash. The growth was allegedly driven by all-time high sales of its gaming, data center, professional visualization and automotive products.

As a result, Nvidia’s shares jumped 8 percent after the figures were unveiled. Q4 performance turned out to be extremely low, however: Revenue was down 24 percent versus the same quarter the previous year to $2.24 billion, staying just slightly above the adjusted forecast.

D’Aria of Bitpro was not surprised by those numbers, arguing that Nvidia is not that depended on its performance within the crypto market. He told Cointelegraph:

“Crypto mining was never the foundation of Nvidia’s revenue, more like a cherry on top. During the 2017 bull run it was a really big cherry, but Nvidia is one of the most innovative chip makers and they are completely dominating their competition in gaming, AI, scientific compute, etc. If crypto went away entirely, Nvidia would be just fine.”

He adds, however, that 2019 might not be as bleak for the hardware developer, especially if the market recovers enough to make GPU mining profitable again, and large projects such as Ethereum (ETH) adopt ASIC resistance measures, making more room for GPUs over ASICs. However, the frenzy times might be over for at least another few years, D’Aria warns:

“Nvidia has strong ProgPoW performance, and since they also lead AMD in general power efficiency with their latest GPUs, those two factors would definitely increase crypto mining’s contribution to their revenue, at least compared to the tail end of 2018. It’s unlikely we’ll see a return to the bonanza of late 2017-early 2018 without a another bubble, but I don’t expect that for a few more years. When that does eventually come around again, Nvidia will undoubtedly experience another huge few quarters, followed by another hangover a few quarters later.”

Similarly, D-Central President Jonathan Bertrand argues that Nvidia will stay afloat regardless of the market condition:

“I have confidence in the products of Nvidia and I am convinced that with the mining or not, the hash centers have the wind in the sails. It is the parallelization and specialization of traditional data-centers that drives us to the emergence of these new ‘hash-centers’ specialized in computing.”

Meanwhile, Bitmain has recently announced its next generation 7 nanometer ASIC mining chip, following a series of negative news caused by the crypto winter, suggesting that mining players are not giving up, but are patiently waiting for the spring to come.

The bear market was particularly hard on Nvidia and its GPUs, but the company still reported full-year revenue gains in 2018. How dependent is it on the crypto market?