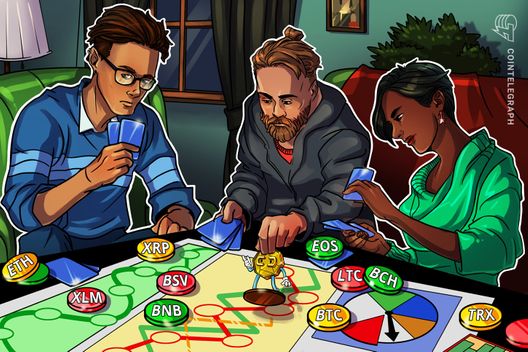 Fundamentals are improving and blockchain is becoming more widely adopted, but sentiment needs to change for a new uptrend to start

During a bull phase, any amount of supply is easily absorbed as the traders are keen to buy on every dip. However, when the sentiment sours and the price fails to stage a recovery, most traders become sellers.

While it is difficult to pinpoint a single reason for the prolonged fall of the crypto prices, the continued selling of Bitcoin (BTC) by the Mt. Gox trustee between February and June of 2018 could have exacerbated the fall.

Now, despite the fact that the fundamentals are improving and cryptocurrencies and blockchain are seeing wider adoption, the sentiment needs to change for a new uptrend to start. Chinese billionaire Zhao Dong, nonetheless, believes that the time to buy Bitcoin is now as he thinks that the only thing traders need right now is patience.

Mike Novogratz, founder of crypto merchant bank Galaxy Digital believes that Bitcoin will command a premium and will become the “digital gold” among cryptocurrencies. He has expects BTC to reach $8,000 in the medium term.

Let’s analyze the charts and find out the patterns that are developing in the major cryptocurrencies.

Unlike the altcoins, Bitcoin (BTC) is not showing a clear trend or a confirmation of a bottom. Both moving averages are flat, and the RSI is just above the midpoint, which suggests a balance between the bulls and the bears.

The critical resistance to watch on the upside is the downtrend line. A break out of this can launch the BTC/USD pair towards $4,255. Above that level, a double bottom pattern will complete with a minimum target objective of $5,273.91.

On the other hand, if the bears plunge the leading cryptocurrency below the support zone of $3,236.09–$3,355, the downtrend will resume. The next level to watch is $3,000, which is a psychological support. If it also breaks, the downtrend can extend to $2,600.

We shall wait for the price to sustain above the downtrend line before recommending any long positions.

After trading close to the 50-day SMA for the past three days, Ethereum (ETH) is again attempting to break out of it. Above the 50-day SMA, the next resistance is at $134.5. If the bulls clear both of these resistances, the cryptocurrency can rally to $167.32.

The ETH/USD pair will lose momentum if the bears sink it below the first support of $116.3. The trend will turn negative if the price continues to slide and plunges below $103.2. Therefore, we suggest traders hold their long positions with the stop loss at $100.

The flattish moving averages and the RSI just above the midpoint are pointing towards a range bound action. We might get a clear picture within the next few days.

Ripple (XRP) is close to the downtrend line, but hasn’t been able to scale it. A small positive is that it has not corrected to the support of $0.27795 once again.

The 20-day EMA is flattening out, and the RSI is just below the midpoint. This means that there is a balance between the buyers and the sellers in the short term. The XRP/USD pair might remain range bound between $0.27795 and $0.33108 for the next few days.

This is the resistance line of the large range; hence, the traders can book partial profits close to this level and hold the rest with the stop at $2.3. We are not in favor of booking profits on the complete position because a break out of $3.2081 can result in a rally to $3.8723.

The 20-day EMA has started to turn up marginally, and the RSI is close to the overbought zone. This suggests that the bulls have a slight edge in the short term.

Contrary to our assumption, if the price turns down from the current levels, the EOS/USD pair can dip to the moving averages, which should act as a strong support. A break from this will indicate that the bears have the upper hand and a fall to $2.1733 is probable.

Litecoin (LTC) is facing profit booking close to the overhead resistance at $47.246. The correction can reach the 20-day EMA, which is just below the downtrend line. We expect the price to rebound from this support.

However, if the LTC/USD pair fails to find support at the downtrend line and the 20-day EMA, it can slide to the 50-day SMA, below which a retest of the support at $27.701 will be probable.

As the 20-day EMA is moving up, and the RSI is close to the overbought zone, it shows that the bulls have the advantage. Hence, we suggest traders hold their long positions with the stops at $33.

If the next attempt to move to the upside finds resistance at $47.246, the traders can book partial profits and raise the stops on the remaining position to breakeven.

Bitcoin Cash (BCH) has been trading close to $121 for the past three days. Attempts to move away from this level have failed.

Conversely, if the pair bounces off the current levels, it can move up to $141. A breakout above the moving averages and the overhead resistance of $141 will indicate strength. As BCH is known for vertical rallies, we might suggest initiating long positions on a close (UTC time frame) above $141.

Although the bulls have been holding Tron (TRX) above the 50-day SMA for the past three days, they haven’t been able to achieve a rebound. This shows a lack of buying at these levels.

The 20-day EMA is turning down, and the RSI has also slipped into the negative territory, which suggests that the bears have the upper hand in the short-term. Without a strong bounce within the next couple of days, chances of a breakdown of the 50-day SMA increase.

The TRX/USD pair will indicate strength only on a breakout and close (UTC time frame) above the overhead resistance of $0.02815521. Until then, every rise will be sold into. The traders holding long positions can keep their stop loss at $0.023.

Though Stellar (XLM) is close to the yearly lows, it is not finding any buyers. The bulls haven’t been able to scale the 20-day EMA since Jan. 10 of this year.

The trend remains down, as both moving averages are sloping down, and the RSI is close to the oversold territory. A breakdown of the lows will resume the downtrend that can sink the XLM/USD pair to $0.05795397.

First signs of recovery will be when the bulls push the price above the downtrend line. Such a move can result in a rally to $0.13427050. As the pair has been a huge underperformer, we shall wait for a reliable buy setup to form before proposing a trade.

After having reached the overhead resistance zone of $10–$12, Binance Coin (BNB) is currently in a minor correction. The fall can reach the 20-day EMA, which is likely to act as a strong support. With both moving averages sloping up and the RSI in the overbought territory, the trend favors the bulls.

A breakdown of the 20-day EMA will be the first sign that the momentum is weakening. Below the 20-day EMA, the next support is at the 50-day SMA which has held the previous two dips.

Although Bitcoin SV (BSV) is struggling to break out of the 20-day EMA, it has not given up much ground, which is a positive sign. For the past three days, it has been taking support at $65.031.

However, if the bulls force a turnaround from the current levels, a move to the 50-day SMA will be probable. Although a very aggressive call, we might suggest long positions above the 50-day SMA. Until then, we remain neutral on the pair.

Fundamentals are improving and blockchain is becoming more widely adopted, but sentiment needs to change for a new uptrend to start