Bitcoin Stuck Around $3,400 as the Stock Market Sees a Minor Downturn

Bitcoin Stuck Around $3,400 as the Stock Market Sees a Minor Downturn 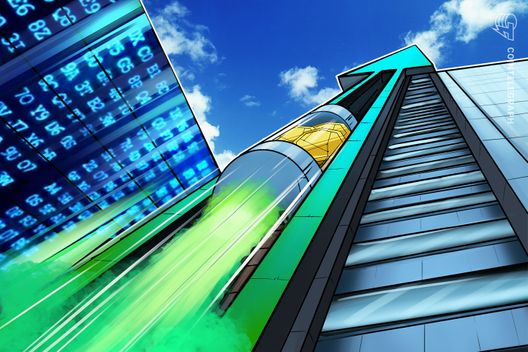 Bitcoin hovers near $3,400 again while the top 20 cryptocurrencies are reporting mostly slight to noteworthy gains

Thursday, Feb. 7 — most of the top 20 cryptocurrencies are reporting slight to noteworthy gains on the day by press time, with Bitcoin (BTC) hovering just over $3,400 again, according to Coin360 data.

At press time, Bitcoin is up a fraction of a percent on the day, trading at around $3,409, according to CoinMarketCap. Looking at its weekly chart, the current price is just over 1.5 percent lower than the price at which Bitcoin started the week.

According to TransactionFee data, there haven’t been so many Bitcoin transactions per day — currently over 336,000 — since January 2018. However, the current transaction volume is still close to 20 percent lower than the all-time high of over 406,000 transactions per day, reported in December 2017.

Top altcoin Ripple (XRP) has gain the same modes amount as Bitcoin in the 24 hours to press time and is currently trading at around $0.293. On its weekly chart, the current price is over 5 percent lower than $0.308, the price at which XRP started the week.

Ethereum (ETH), the second-largest altcoin by market cap, has seen its value increase by just a quarter of a percent over the last 24 hours. At press time, ETH is trading around $104, after having started the day at $103. On the weekly chart, Ethereum’s current value has dropped 2.3 percent from $107, the price at which the coin started the week.

Among the top 20 cryptocurrencies, the ones experiencing the most notable growth are NEM (XEM) — up 9.76 percent — Iota (MIOTA) — up 4.3 percent — and Ethereum Classic (ETC), up 3 percent on the day.

The stock market is seeing a minor downturn, with the S&P 500 down 1.5 percent today and Nasdaq down 1.49 percent. The CBOE Volatility Index (VIX) on the other hand has gained 10.7 percent of its value on the day at press time.

Major oil futures and indexes are seeing mixed market movements, with WTI Crude down 3.74 percent, Brent Crude down almost 3 percent. Mars US, on the other hand, is up 1.1 percent, Opec Basket up 0.4 percent and the Canadian Crude Index down 6.76 percent, according to oilprice.com.

In Venezuela, Bitcoin trading volumes have reached a new all-time high on peer-to-peer exchange LocalBitcoins, amidst massive hyperinflation and an ongoing presidential crisis

Bitcoin hovers near $3,400 again while the top 20 cryptocurrencies are reporting mostly slight to noteworthy gains