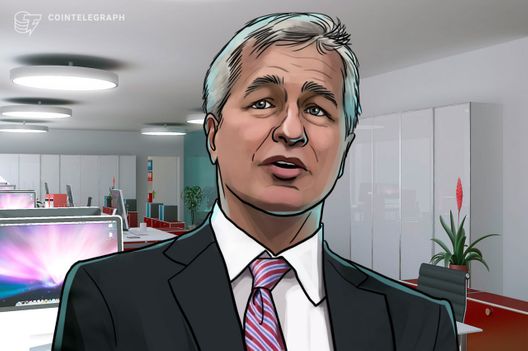 Jamie Dimon has claimed that he did not intend to become a spokesperson against Bitcoin, noting that he is not glad about its collapse in 2018

JPMorgan CEO Jamie Dimon has reiterated his negative stance on Bitcoin (BTC), stressing that he does not really care about the cryptocurrency. Dimon spoke on the subject in an interview with CNBC’s Squawk Box on Jan. 23.

When asked if he was pleased with Bitcoin’s collapse in 2018, Dimon stated that he was not, noting that multiple media outlets have over-reported his sceptical comments. The CEO argued that he had not intended to become the spokesperson against the biggest cryptocurrency.

During the interview, when asked if Bitcoin is better than marijuana stocks, Dimon noted “that it is, but we’re not banking pot either.” In February 2018, JPMorgan had banned the purchase of cryptocurrency with their credit cards.

In the recent interview, the JPMorgan CEO also repeated his support for the idea of the underlying technology behind Bitcoin: blockchain. While expressing his pro-blockchain position, Dimon noted that considers it to be a real technology and called it an up-to-date database that everyone can access and trust.

Dimon had previously been reported as bullish on distributed ledger technology (DLT), which he claimed JPMorgan would use for various cases in 2018.

However, the CEO still noted that blockchain industry disruptors have been talking about their products for many years, but that no one appears to have done something effectively yet.

After announcing a blockchain-enabled system for global payments in 2017, JPMorgan Chase filed a patent for a peer-to-peer payment network based on blockchain in May 2018.

In October 2018, a research group released a study claiming that blockchain is a key technology for the bank’s development roadmap to become a major digital bank. Jamie Dimon has claimed that he did not intend to become a spokesperson against Bitcoin, noting that he is not glad about its collapse in 2018