Law enforcement subpoena requests to crypto exchange ShapeShift rose 175 percent in the second half of 2018: report

Law enforcement requests sent to Switzerland-based cryptocurrency exchange ShapeShift rose 175 percent in the second half of 2018, according to a new Compliance Transparency report published by the exchange Jan. 18.

In a blog post accompanying the report, Shapeshift outlines that it typically receives requests from law enforcement agencies for data including crypto addresses (in or out of the Shapeshift system), transaction IDs, identity information (names, emails, IP addresses), cryptocurrency or crypto asset information and more. ShapeShift emphasizes that in most cases it is not informed of the details of the investigation or probe for which the data is being gathered. 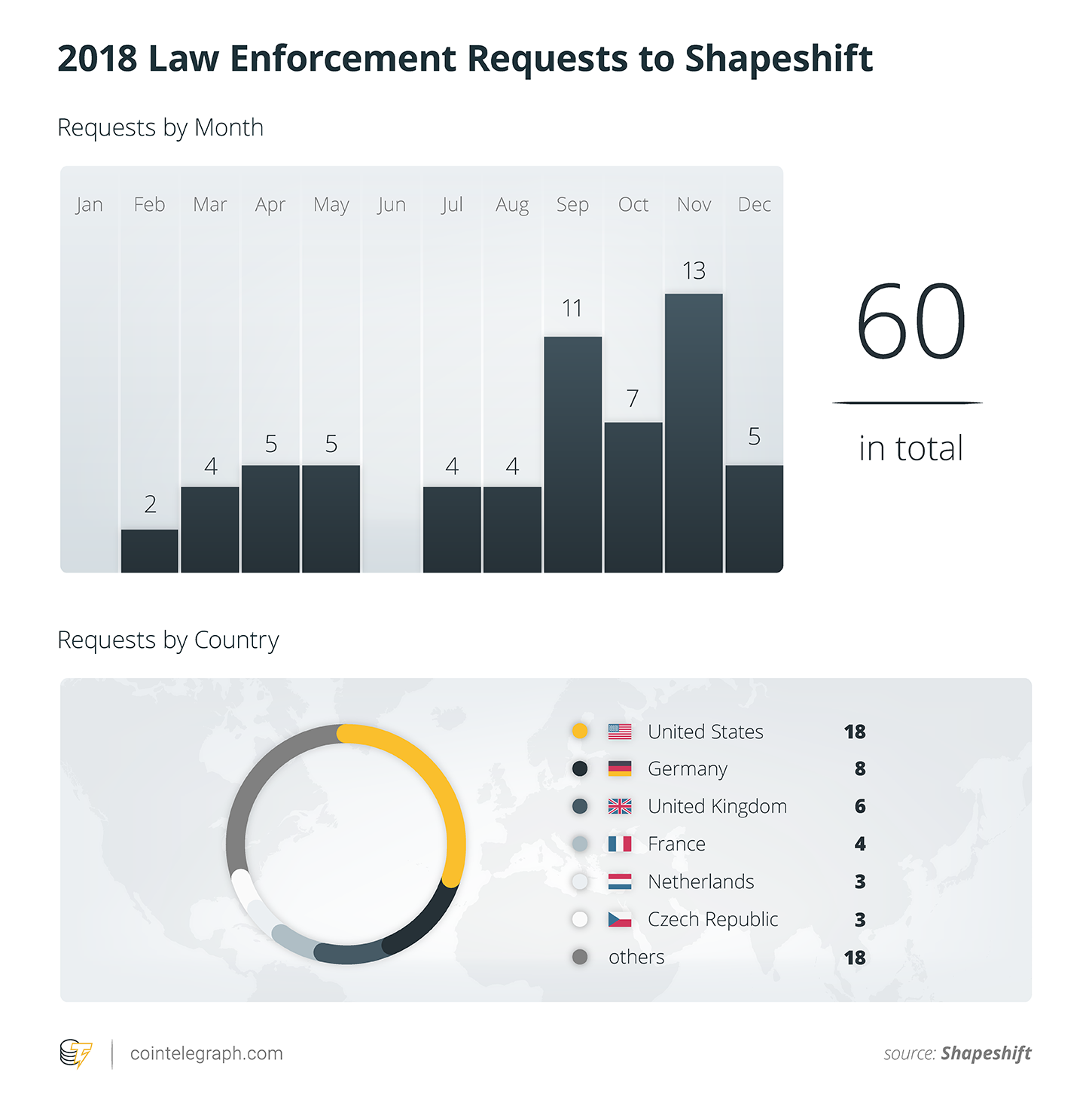 In terms of geographic jurisdictions, the highest number of requests over the year came from United States-based agencies — accounting for 18 out of a total of 60 global inquiries. Among these, 6 came from the FBI, 5 from the Securities and Exchange Commission (SEC), 3 from state level authorities, 2 from the Department of Homeland Security (DHS) and 1 from the Commodities and Futures Trading Commission (CFTC).

German agencies accounted for the second-highest number of inquiries by country — issuing 8 requests — followed by the United Kingdom, with 6, and France, with 4.

ShapeShift claims it is usually able to provide the requested information within a 1-2 week time frame, and that it complied with every verified request it received in 2018. As the exchange notes, the uptick in its law enforcement inquiries over the year correlates with that seen by other exchanges. As previously reported, subpoenas to crypto exchange Kraken increased three-fold in 2018, as compared with the preceding year.

ShapeShift’s blog post takes pains to emphasize that its experience with law enforcement is typical, citing TechCrunch founder Michael Arrington’s statement when his $100 million crypto hedge fund was probed by the SEC in March 2018: “We received a subpoena. Every [crypto] fund I’ve talked to has received one…”

As reported last fall, ShapeShift was prompted to refute allegations of facilitating money laundering, after being implicated in a Wall Street Journal report that claimed $9 million in ill-gotten funds had been funnelled through its platform.

As a non-custodial platform, Shapeshift historically did not impose user identification requirements on traders — although this is now changing since the platform began to evolve a mandatory membership model in September.

Law enforcement subpoena requests to crypto exchange ShapeShift rose 175 percent in the second half of 2018: report