Good Ol’ FUD: The Brightest Media Burials of Bitcoin in 2018

Good Ol’ FUD: The Brightest Media Burials of Bitcoin in 2018 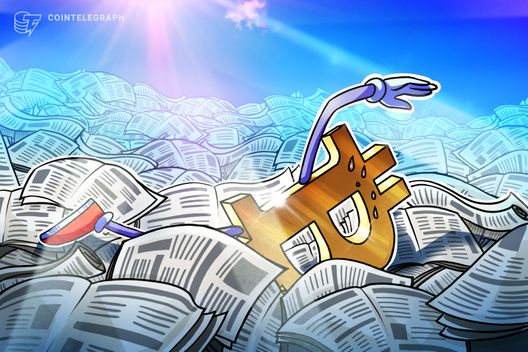 For Bitcoin’s 10th anniversary, we remember the brightest FUD of 2018: from Tulip Mania to Dr. Doom calling Vitalik a “dictator for life.”

Ten years ago, on Jan. 3, 2009, the Bitcoin (BTC) network was created. Since then, the asset’s price has famously been subject to volatility. That, along with the inceptive crypto’s focus on decentralization, have been disturbing mainstream media, which still fails to grasp and discuss the concept of Bitcoin without skepticism — hence the omnipresent headlines exclaiming its so-called death.

Last year was no different in regard to the FUD (i.e., fear, uncertainty and doubt) about crypto, and Bitcoin specifically — especially considering the bear’s arrival. According to 99bitcoins, the virtual currency had been declared as dead at least 91 times in 2018. Here’s how media and mainstream economists buried Bitcoin throughout the year, month by month.

On Jan. 19, when Bitcoin’s price was still soaring, even after a major bounceback from its December all-time high, Nobel Prize-winning economist Robert Shiller told CNBC that Bitcoin would collapse entirely. In what now seems like an obligatory move for Bitcoin skeptics, Shiller compared the cryptocurrency to the Dutch Tulip Mania:

„It has no value at all unless there is some common consensus that it has value. Other things like gold would at least have some value if people didn’t see it as an investment,” Shiller said, adding:

“It reminds me of the Tulip Mania in Holland in the 1640s, and so the question is did that collapse? We still pay for tulips even now and sometimes they get expensive. [Bitcoin] might totally collapse and be forgotten and I think that’s a good likely outcome but it could linger on for a good long time, it could be here in 100 years.“

“Is Bitcoin Heading To Zero?” — Forbes

In February, Forbes published a more detailed investigation of the continuing Bitcoin price drop. The article focused on the main shortcomings of Bitcoin in relation to Ethereum (ETH): namely, transaction fees and governance issues.

The Forbes author cited PH.D. economist Eli Dourado’s work on Ethereum, which highlighted that transaction costs on the Ethereum blockchain were considerably cheaper. Furthermore, the governance of Bitcoin and its ongoing development were also cited as potential issues:

“Bitcoin has been unable to seriously address its on-chain scaling problems. Its community has alienated, marginalized, and purged dissenting voices, notably Mike Hearn, Gavin Andresen, and Jeff Garzik. Its core development team has been captured by an ideological faction committed to only off-chain scaling in the name of decentralization. This faction has undermined consensus scaling agreements and trashed the reputation of anyone who points out any of the above.”

“Bitcoin is based on the blockchain pipe dream” — The Guardian

“Overpriced cryptocurrencies owe their diminishing credibility to an over-hyped technology,” read the subtitle to the Guardian’s skeptical piece on Bitcoin that was published in March. It then proceeded to argue that blockchain’s effectiveness is largely overestimated, and eventually concluded:

“It is high time to end the hype. Bitcoin is a slow energy-inefficient dinosaur that will never be able to process transactions as quickly or inexpensively as an Excel spreadsheet. Ethereum’s plans for an insecure proof-of-stake authentication system will render it vulnerable to manipulation by influential insiders. And Ripple’s technology for cross-border interbank financial transfers will soon be left in the dust by Swift, a non-blockchain consortium used by all of the world’s major financial institutions.”

In April, the MIT Technology Review somewhat unexpectedly invited its readers to “destroy” Bitcoin, along with three scenarios in which it could allegedly be accomplished. While it’s important to remember that the Technology Review is independent from the Massachusetts Institute of Technology and therefore does not represent its official position, the article seemed somewhat radical and, more importantly, logically underwhelming.

One of the options, for instance, was a government takeover of Bitcoin with the creation of a Federal Reserve-backed coin (Fedcoin):

“The year is two-thousand-something-big, and it’s the day your taxes are due. But you don’t file them. Instead an algorithm automatically makes a withdrawal from your electronic wallet, in a currency called Fedcoin.”

In May, billionaire investor and vocal Bitcoin opponent Warren Buffett gave a speech at the annual meeting of his company, Berkshire Hathaway. He reiterated his negative stance toward cryptocurrencies, saying he was sure that it will come to a bad end once the craze over crypto subsided. This time, however, he added something new by saying that Bitcoin is “probably rat poison squared.”

Berkshire Hathaway’s vice chairman, Charlie Munger, was quick to echo Buffet’s criticism of investing in cryptocurrency, even taking it up a notch:

„Someone else is trading turds and you decide I can’t be left out.“

Jordan Belfort, known colloquially as the “Wolf of Wall Street,” criticized Bitcoin for a second time, after previously calling it “wolf in sheep’s clothing.” This time, he said in a YouTube video  that ”it is all based on the Great Fools Theory.″

“There’s no fundamental value [with Bitcoin], it’s all based on the next guy and the next guy. Get out if you don’t want to lose all of your money, because […] there’s a very good chance it’s going to crack. And when it really cracks, you’re not going to be able to sell on the way down. There will be no liquidity.”

In his considerably comprehensive and measured column, Times author Paul Krugman explained his skepticism regarding Bitcoin and other cryptocurrencies.

Essentially, Krugman pinpointed two shortcomings: transaction costs and the absence of tethering. He then argued that conventional monetary system works more effectively, and thereby will not be replaced by cryptocurrencies:

“Indeed, eight years after Bitcoin was launched, cryptocurrencies have made very few inroads into actual commerce. A few firms will accept them as payment, but my sense is that this is more about signaling — look at me, I’m cutting-edge! — than about real usefulness. Crypocurrencies [sic] have a large market valuation, but they’re overwhelmingly being held as a speculative play, not because they’re useful as mediums of exchange.”

“Bitcoin and other cryptocurrencies are useless” — The Economist

As the summer was drawing to a close and the bear market started to prevail, The Economist decided to step in with a catchy headline. “A decade on, it [Bitcoin] is barely used for its intended purpose,” the author argued, adding:

“Users must wrestle with complicated software and give up all the consumer protections they are used to. Few vendors accept it. Security is poor. Other cryptocurrencies are used even less.”

Bloomberg dubbed the bear market as “The Great Crypto Crash of 2018,” and drew another classic parallel akin to the tulip mania by comparing crypto with the dot-com bubble. However, it reportedly tumbled even harder: CryptoCompare Digital Assets 10 Index extended its collapse from the January high to 80 percent, which is higher than the dot-com’s 78 percent peak-to-trough decline in 2000, the article reported.

“The virtual-currency mania of 2017 — fueled by hopes that Bitcoin would become “digital gold” and that blockchain-powered tokens would reshape industries from finance to food — has quickly given way to concerns about excessive hype, security flaws, market manipulation, tighter regulation and slower-than-anticipated adoption by Wall Street.”

On Oct. 7, American economist Nouriel Roubini of New York University — known as “Dr. Doom” for his alleged prediction of the 2008 financial crisis and also as “Permabear” for his market forecasts — tweeted that cryptocurrency is more centralized than North Korea, even going so far as to call Ethereum’s Vitalik Buterin a dictator:

Bloomberg author Lionel Laurent argued that, as Bitcoin’s price crashed, the cryptocurrency enriched “only insiders such as mining companies and crypto-exchanges, and the early birds and tech elites who cashed in at the right time,” instead of establishing a neutral system based on blockchain. He went on to lambaste the effectiveness of Bitcoin even further:

“Nothing on the Bitcoin label turned out to be in the bottle. As a means of payment, it is cumbersome, volatile and expensive. It has destroyed value rather than storing it. Its decentralized technology was sold to investors as being unique. It has been anything but.”

“Yep, Bitcoin Was a Bubble. And It Popped.” — Bloomberg

In one of the last mainstream pieces reporting on Bitcoin’s failures, Bloomberg basically described them as a “painful lesson about speculation” for millennials:

“In the end, the Bitcoin bubble may have been a net good for society. The total amount of wealth involved — a few hundred billion dollars, spread out around the globe — was small compared to the 2000s housing bubble or the 1990s dot-com bubble, meaning the pain will be limited. And the experience of such a classic, perfect financial bubble may be sufficient to teach the millennial generation what their forebears learned much more painfully — if something looks too good to be true, it usually is.”

The article also cited John McAfee’s year-old tweet stating that “bubbles are mathematically impossible in this new paradigm.” It does, however, acknowledge that the cryptocurrency has recovered “from several previous bubbles and crashes, including one in 2011 that was just about as devastating.”

For Bitcoin’s 10th anniversary, we remember the brightest FUD of 2018: from Tulip Mania to Dr. Doom calling Vitalik a “dictator for life.”