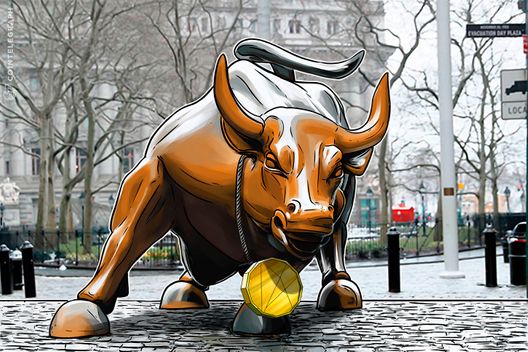 Wall Street giants are postponing their plans to more actively enter the crypto industry as the value of cryptocurrencies has fallen, Bloomberg reports Sunday, Dec. 23.

The article begins: „Limbo — that’s where to find Wall Street when it comes to cryptocurrencies,“ and then focuses on the efforts in the crypto sphere this year made by banking giant Goldman Sachs, multinational financial services company Morgan Stanley, major banking conglomerate Citigroup Inc. and United Kingdom financial services provider Barclays PLC.

According to people familiar with Goldman Sachs’ crypto business, the firm’s progress has been too slow to be noticeable. Moreover, the company’s crypto non-derivative funds have so far attracted only 20 clients, the unnamed sources told Bloomberg

In addition, Justin Schmidt, hired to head digital assets division at Goldman Sachs, revealed in November that regulators were limiting his plans. However, Bloomberg’s unnamed interlocutor adds that the company is going to add a digital assets specialist to its prime brokerage division.

As for Morgan Stanley, the company has been ready to launch swaps tracking Bitcoin futures since early fall, but has not yet received a single contract, sources told Bloomberg. Nonetheless, the firm is ready to launch crypto services as soon as there is any sign of demand, an unnamed source noted.

Citigroup and Barclays have experienced similar problems: sources say the United States-based banking group has not yet traded any of its crypto-related products within the regulatory framework, and two Barclays employees hired to explore the industry for the firm left this year. A spokesman noted that the U.K. company has no plans to open a crypto trading desk.

In the meantime, the banking giant has since denied rumors of having abandoned its plans to launch a crypto trading desk.

In November, Morgan Stanley released their latest report on Bitcoin, titled “Update: Bitcoin, Cryptocurrencies and Blockchain,” stating that Bitcoin (BTC) and altcoins have constituted a “new institutional investment class” since 2017.

And Bakkt, the digital assets platform created by the operator of the New York Stock Exchange, announced a target launch date for Jan. 24, 2018, pending regulatory approval.